In January 1420, the town of Sezimovo Usti was controlled by a noble family that was divided over Hussitism. Ulrich, a prominent noble of that area, tried to quiash the new beliefs, but wound up being defeated instead bu the large number of Huissiote followers. The town itself was poorly situated for defensive purposes, but a nearby abandoned fortress known as Hradiste seemed much more promising.  It was located on a steep hill;, with the river Luznice and one of its tributaries surrounding it on three sides. The fortress belonged to another ant- Hussite Nobleman, who had begun to restore it. In January and February, the pro Husite townspeople, aided, by the noble's own pro-Hussite brother seized control of the fortress. They burned their old town to the ground and related to the fortress, and renamed it "Tabor", with the intent, which was realized, that it would become a new center of of the Hussite movement.

Back in Pilsen, Jan Ziska was finding himself increasingly in conflict with the local Hussite cleric, Koranda, who had effectively established a theocratic dictatorship there. Koranda issued orders destroying churches and monasteries built in honor of saints, whose veneration was prohibited by Hussite teachings. Ziska, feeling that war should be conducted by soldiers and that clerics should stick to religious matters wrote to the University masters in Prague. They replied that under no circumstances could priests fight in battles, but that laymen could fight a purely defensive war to defend their creed. Koranda's excesses alienated the more conservative elements in Pilsen, and when a preached second coming of Christ fvailed to materialize, , even Koranda's supporters started to lose faith. Meanwhil;e, the city was invested by the Royalists under Wenceslaus of Duba. The citizens of Tabor had earlier invited Ziska to become their military leader, but he had declined. With the situation in Pilsen deteriorating, Ziska's friends convinced him to transfer his services to Tabor. Ziska negotiated a capitulation of Pilsen , when was finalized on March 20, 1420. Under it terms, the Royalist forces avoided a costly assault, while the Pilseners were granted the right to take communion in both kinds, and any who wanted to leave the city could. While most stayed, Ziska, along with Koranda and some 400 followers left. The agreement was to be binding on all Royalist forces.

However, Sigismund, alerted by members of the anti Hussite contingent in Pilze, promptly violated the agreement by ordering several Royalist barons and their men to intercept Ziska. These forces , totaling about 2,000 men, mostly heavily armored k nights and their retainers, established themselves in Pisek, through which Ziska and his men would have to pass. As Ziska and his men passed by the village of Suidomer on March 25, 1420, they saw approaching Royalists forces, which outnumbered them about 5:1. With their being  no hills or woods for cover being available nearby, Ziska used the empty fishponds in the area, anchoring one flank on a dam, and the other  flank and his rear with 12 War Wagons. His infantry were deployed in between,  using a narrow front and a deep formation. Several mounted charges failed, whereupon the knight dismounted and attacked on foot. The Royalists were able to severely damage some of the wagons and nearly penetrated the Hussite lines. However, as the Royalists tired from their multiple attacks, darkness descended quite abruptly, and the heavily encumbered knights became confused and disordered, ultimately withdrawing with heavy losses. 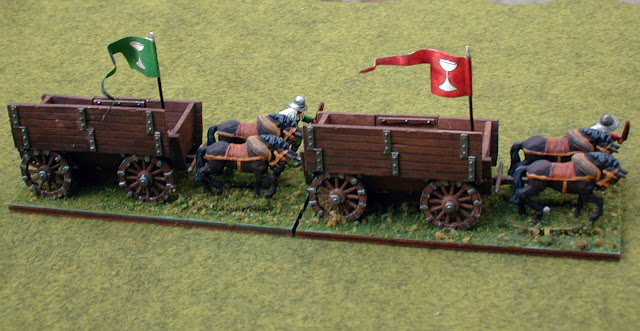 Hussite War Wagons. These came to be made to a standard design, and were basically 4 wheeled heavy farm carts, which had extra boards added to them to provide protection for the men who fought in and around them. 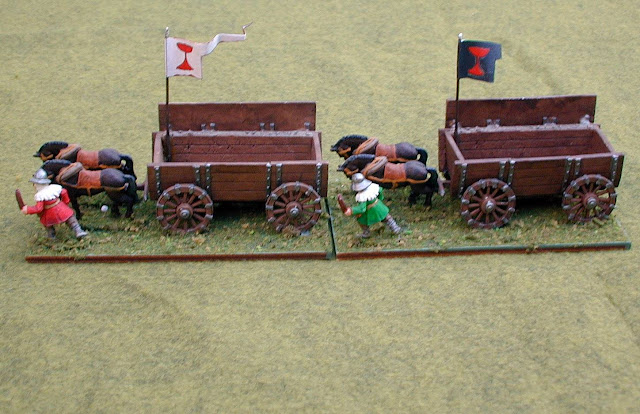 On one side of the wagons there was a narrow door which could be dropped to form a ramp up into the wagon.

Underneath the wagons there was often a loopholed plank which could lowered to provide cover for additional shooters. 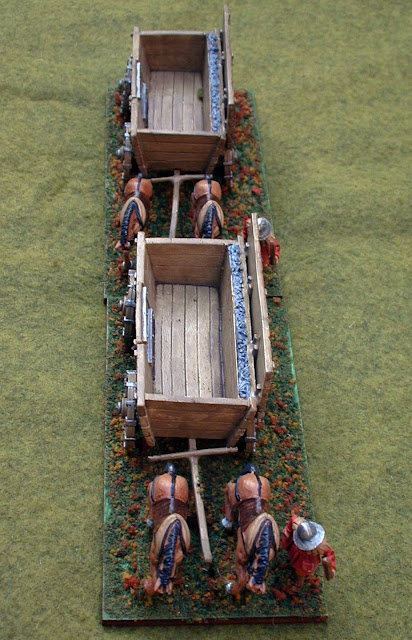 The sides pf the wagons sloped outwards, which helped protect the wheels, which might be additionally protected with heaped up earth, as well as a ditch dug in front of the wagons, when time allowed. . Each wagion held rocks for throwing as well as shovels, picks, and axes to help strengthen the Wagenburg. 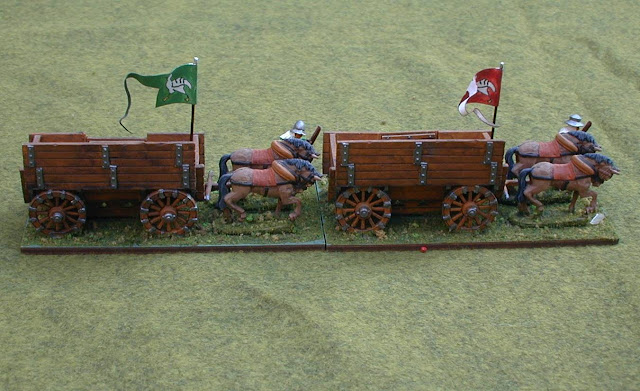 Each wagon flew a banner, usually either bearing the Chalice or a Goose (the later was a play on words - in Czech, "Huss" means "goose". These msay have been used for signally when the wagons were under way. 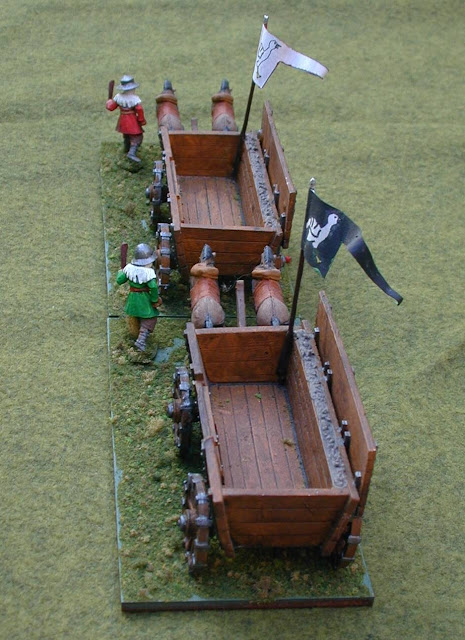 The complement of a War Wagon was eventually fixed (officially) at
16-22 soldiers: 4-8 crossbowmen, 2 handgunners, 6-8 soldiers equipped with polearms or flails (the flail was the Hussite "national weapon"), 2 pavisers and 2 drivers. The carts were typically drawn by a four horse team. 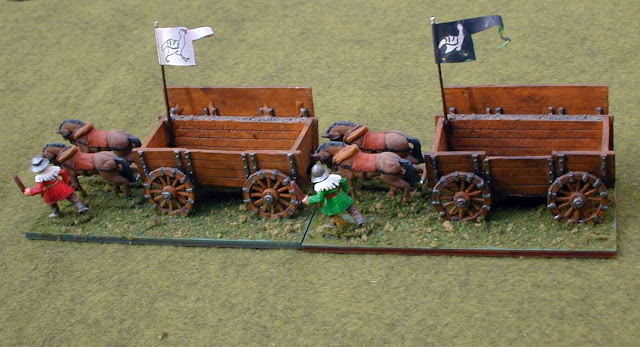 Of this complement, probably only the Crossbowmen and handgunners (the numbers of the later increased as the Hussite Wars progressed) fought from within or under the Wagons, with the Pavisers guarding the gaps between the chained-together wagons,, the drovers tending the horses, and the Flail men in reserve ready to strengthen the defenses or contain any breeches. 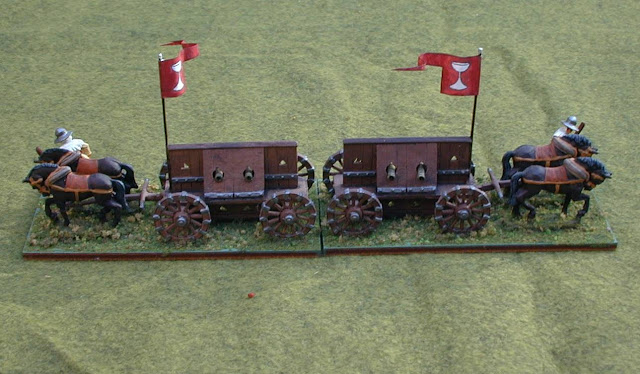 Other War Wagons had light artillery pieces mounted directly upon them, as seen above. 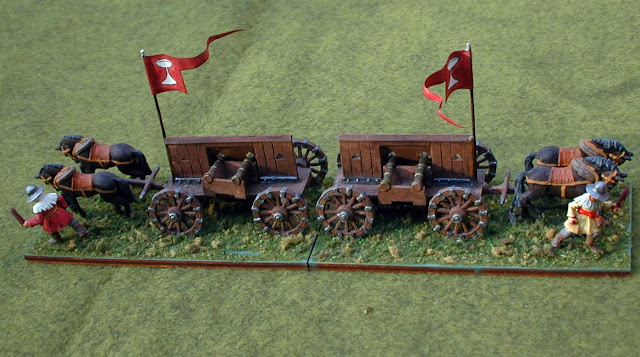 These gin wagons would still have a supporting contingent of crossbowmen, handgunners, Fl;ail; men, etc. 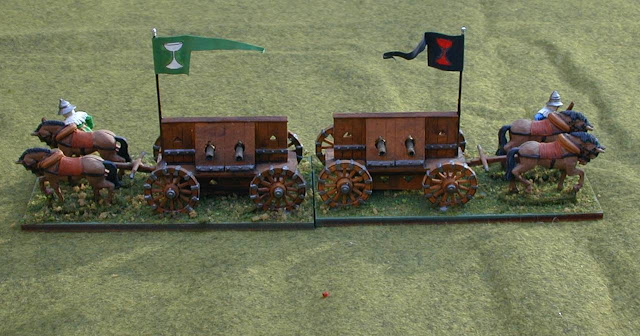 The wagons would also carry the necessary supplied of gunpowder, etc. 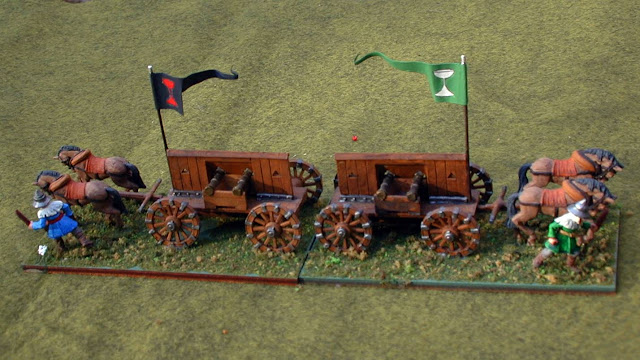 All of my War Wagons are by Old Glory - very fine models at a reasonable price! 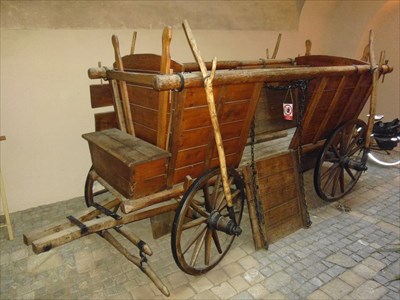 Reproduction of a Hussite War Wagon, from the Hussite museum in Tabor, Czech Republic 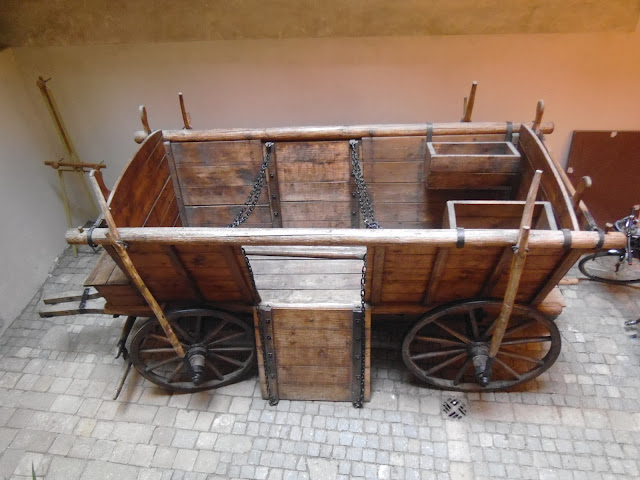 Another view of the Reproduction wagon. Note the boxes for rocks - both for throwing and probably additional weight to make the wagon more difficult to tip over in battle. 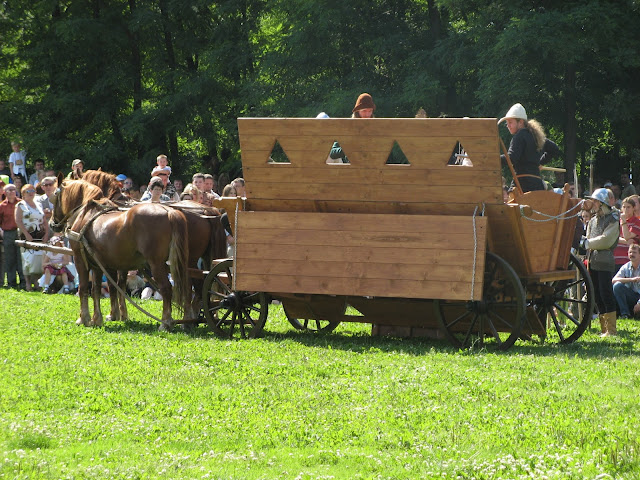 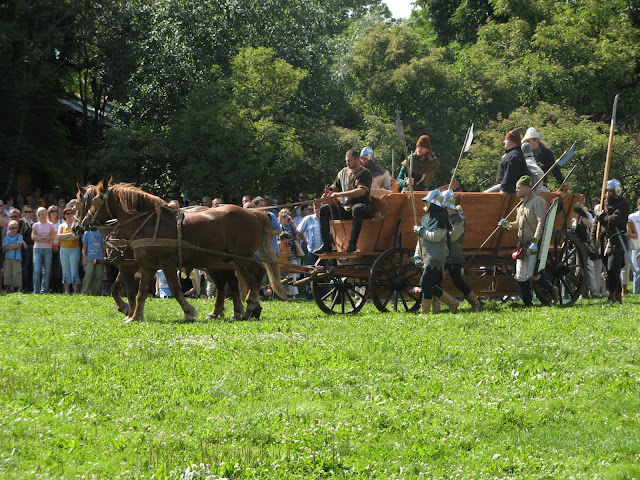 Another view of the wagon, now seen on the move.
Posted by Gonsalvo at 7:55 AM