I made the 75 minute drive to Manchester, CT to put on a To the Strongest!  game at the 2nd iteration of Portal Con, held at The Portal, the most excellent gaming space of The Time Machine hobby shop, located directly across the street from the store. The Portal also houses their wargaming and extensive card/ board/RPG/etc retail stock. Last year, icy roads forced me to cancel my game there, but this year, despite a moderate snowstorm the day before, the weather was sunny and quite warm for February in Connecticut. I set up one table with my Hussites vs Teutonic Knights (functioning as Catholic "Crusaders"), and the other with my NK Egyptians vs Later Assyrians. Having 4 players, we opted to have everyone play on the same table, as none of them had even heard of the rules previously(!) We got underway about 9:30 AM, and after a brief introduction to the rules, we were turning cards and pushing lead. 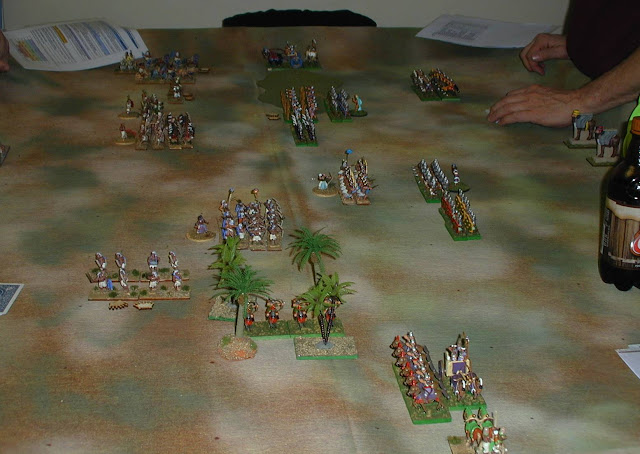 We had 4 players - on this side of the table were John, and opposing him, Joseph (age 9). On the far side of the table were Joe's Dad and his opposition, whose names escape me at the moment, unfortunately. Joe chose the Chariot table, which was probably good, as Barry and I had played with them previously. I decided to keep the same army rosters I used for that game without changes, having considered how the Egyptians might better employ their Light Chariots against the Assyrian Heavy Cavalry and Chariots. We got into the thick of it quickly, so it wasn't until about mid game that I first remembered to take a picture! Note the 2 units of Assyrian Heavy cavalry in the upper right hand corner of the picture - They managed to turn an Ace (= no actions) on every turn of the game save 1. Those guys were so "just not into it" this day! 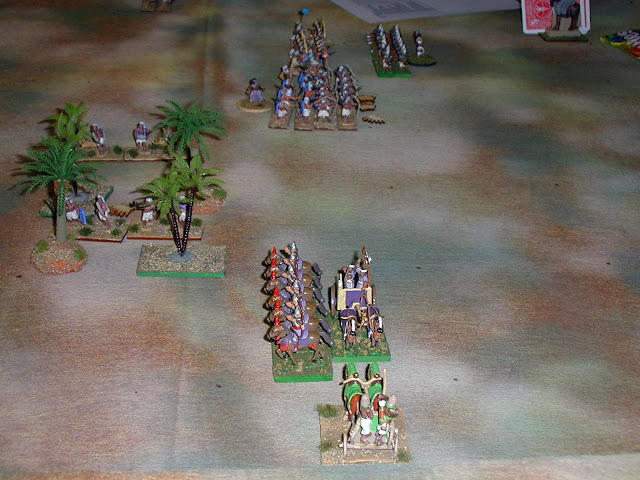 On the Joseph and John flank, the Egyptians have taken losses, but have made the most of the mobility of their Light Chariots and Light Infantry to constantly threaten and attack the flanks of the Assyrians. A bit of terrain for the first time in one of our TTS games (one box of Oasis, and a 2 box low hill) also served to (appropriately) help the Light infantry and hinder the heavier units. 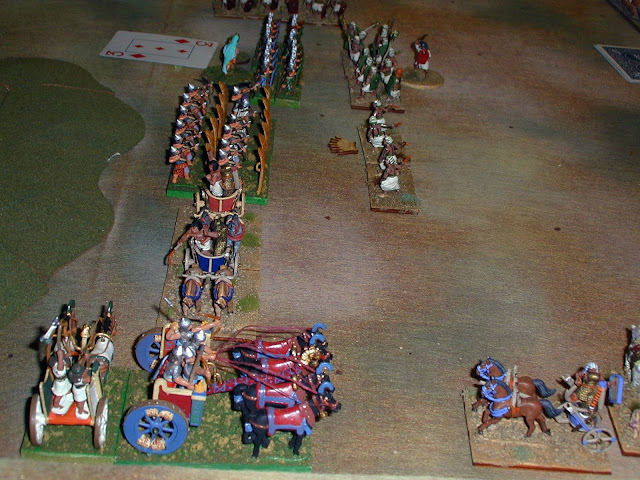 On the opposite flank, The Assyrian position seemed much stronger... if they could just get those laggard Heavy Cavalry into the action! As it turned out, however, the Egyptians won when the Assyrians had to surrender their last Victory medal. For once, the archers on both sides managed to actually hit something, destroying several units of spearmen. In the end, the triumph of the infantry and chariots on John's flank, along with some clutch Egyptian card-play on this one, tipped the balance. Game, Jonakammun and co.!

Here's the (4 x 6 foot) table I set up for the Hussite vs Teutonic Knights game. 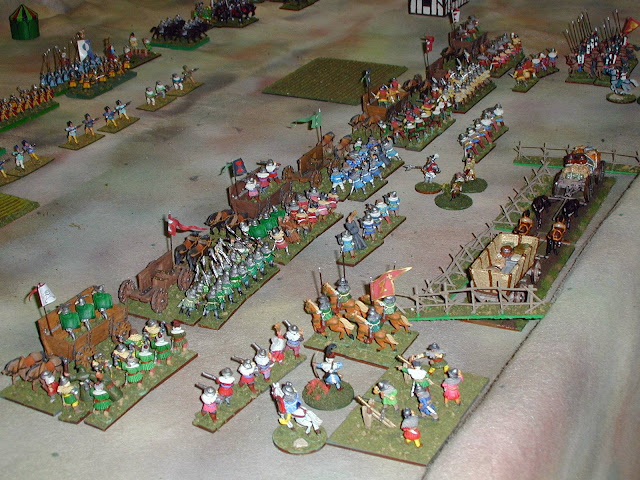 I hadn't realized that Simon hasn't done the Hussite lists for TtS yet (he is working in them right now), so I had some extra work to do there.  I'll present the lists and forces I used after the rest of the pictures. 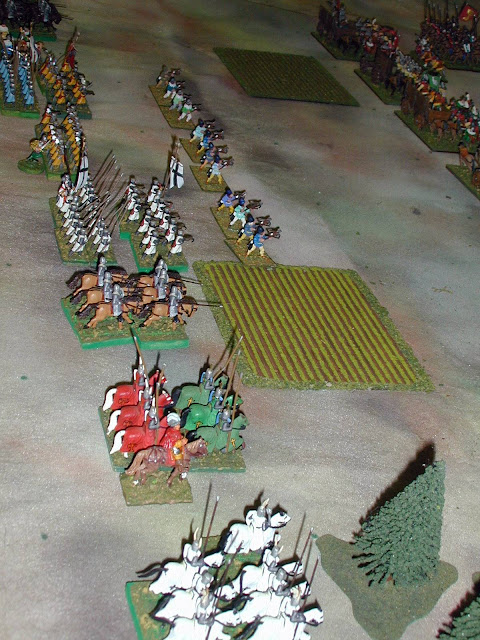 View of the Teutonic Knights side of the table. The bulk of the figures used here are from the Minifigs "Alexander Nevsky" range of the 1970's. They are for a somewhat earlier time than 1420, but whatever! 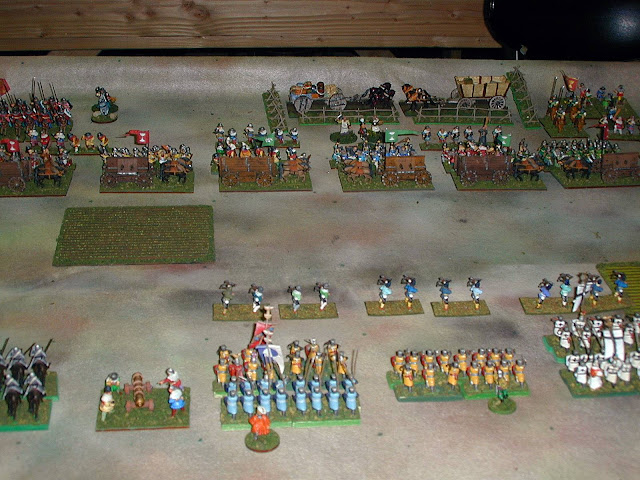 View of the central portion of the table. I marked this ground cloth off with 6' (150mm squares) the day before the mini-convention, this time using green permanent marker dots. 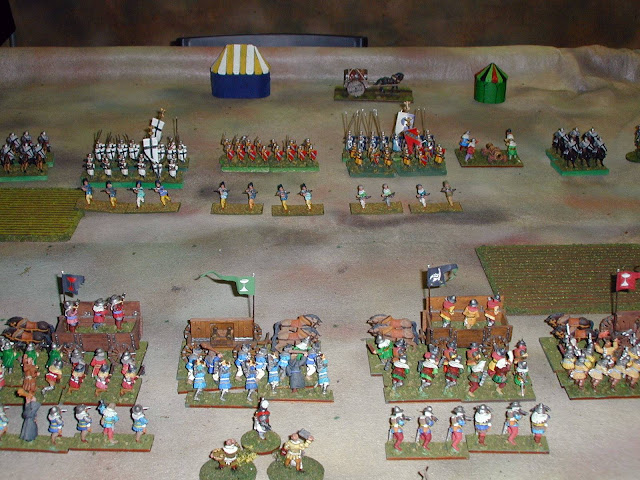 View of the Hussite center; in To the Strongest, War Wagons are a "Deep" unit. This makes them very resilient, but also tough to maneuver. They can share a Box with a unit of Light troops. I was actually running low on Hussite troops in general (I am  modeling a WW unit with the Wagon, one stand of X-Bow or hand gunners "in" the wagon, 2 stands of missile troops behind that, and 2 stands of Melee troops behind THAT, each War Wagon has 15 foot figures associated with it. Yikes! It looks like I need a few more troops, especially some Light Infantry (2 stands of 2 figures). I think I will need to add a small number of the excellent Kingmaker Hussites (now sold by 1stCorps) to my forces. 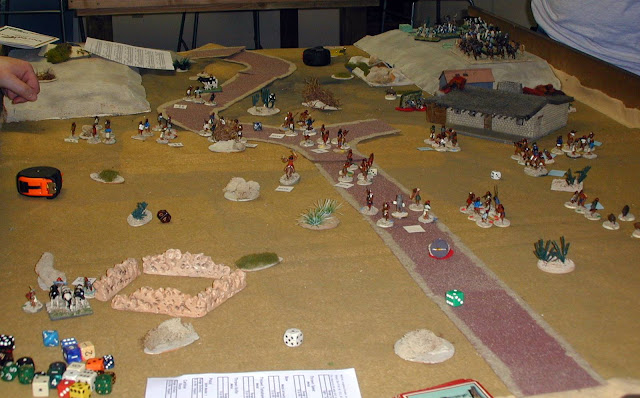 Greg and Carl ran this "American Civil War on the frontier" action - Confederates vs Apaches at the 1st Battle of Dragoon Springs, May 5, 1862. 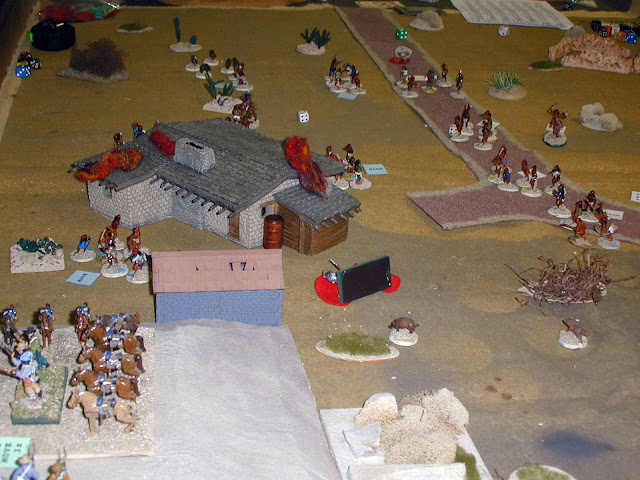 Cochise was among the Apache leaders, who inflicted a defeat upon the rebels in the Confederate territory of Arizona, seizing many horses and cattle. I think it turned out similarly in the game! 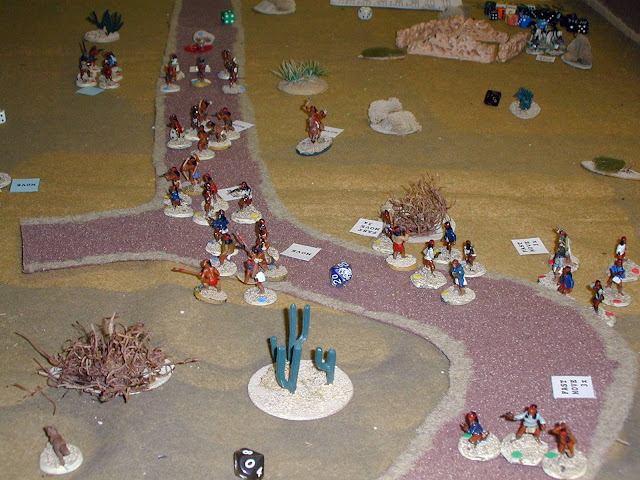 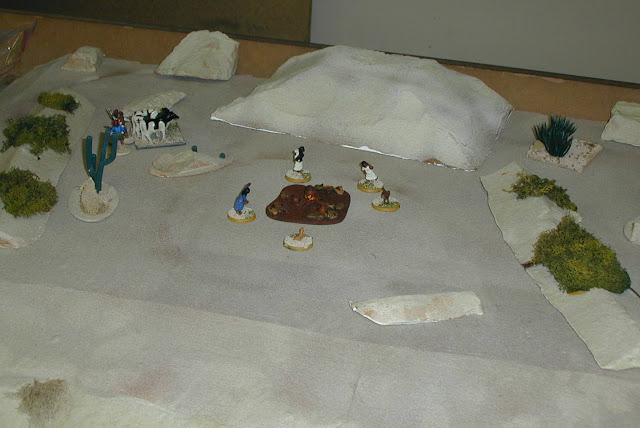 The men in grey came back for revenge a few days later... historically, the Indian camp was sacked and the horses and livestock recaptured. For now it is peaceful awaiting the start of game 2! 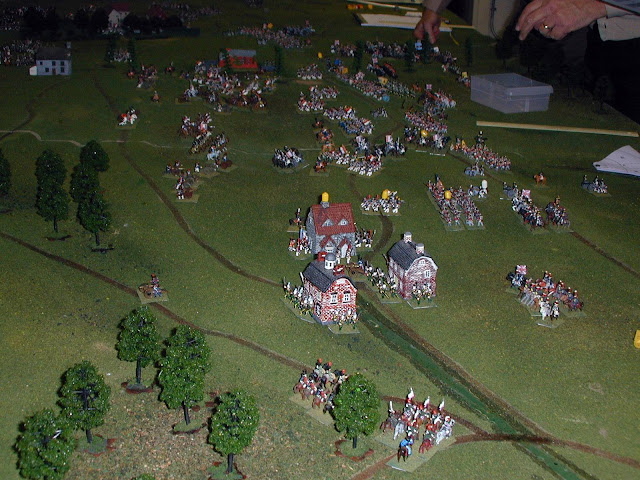 In the main room was a big, 15mm Waterloo game. It looked like about 5 players a side, using "Age of Eagles" rules. There were many other tables of board games (Churchill's War being among them), and card games, too. X-wing was on the agenda for later in the day as well. 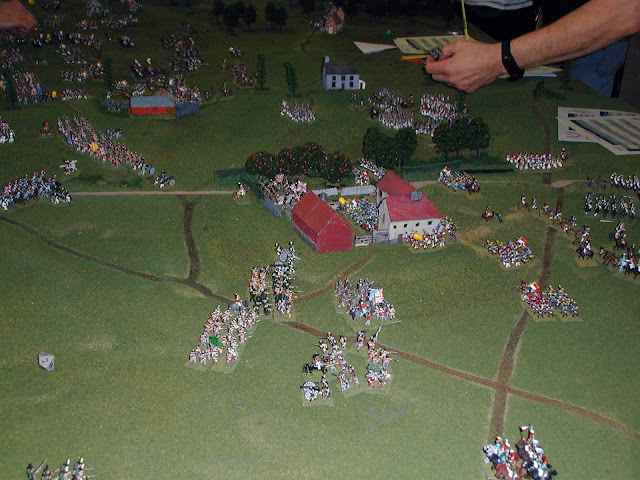 The Waterloo game used custom terrain boards, and was evidently run previously at Historicon last year. Hougoumont is seen in the foreground 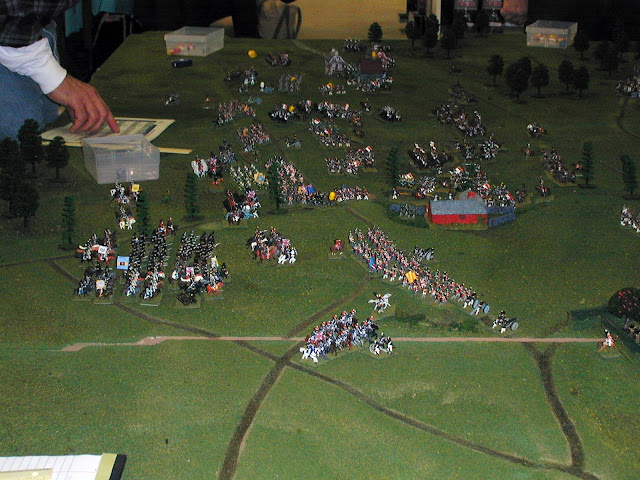 Following the Egypt vs. Assyria game, I could have run the Hussites, but I had promised my wife I'd be home at a reasonable hour, and we had dinner plans, so I had to pass up the opportunity. It is always wise to keep the Empress happy! The Portal did provide a complimentary lunch ( slices of some 6 foot Subway grinders, chips, and water) for all the GM's which was much appreciated, and at $7 a pretty good cash deal for attendees as well! 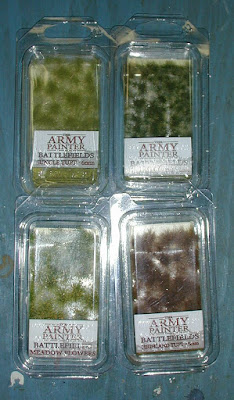 Before leaving, I did a little shopping, as this great place deserves our financial support. I will be needing more Tufts for basing, so these will prove useful - I especially like the Flower meadow tufts! 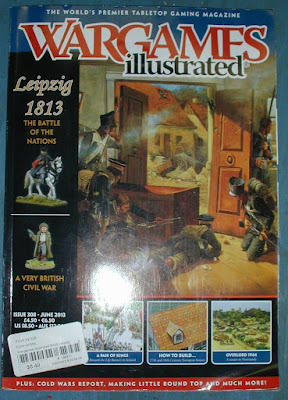 I also picked up this 2013 issue of WI, which covers Leipzig - appropriate, with Liebertkolwitz in the planing stages for this year's Historicon!  Thanks to Ken B and all the staff of the Portal for a fine event!

Here are the forces I set up for the Hussite game:

Medals  = Total divided by 3
Reserve Ammo = 1 chit for every unit that can fire
Demoralized Command = Lost ½ of Victory medals; Effects

Medals  = Total divided by 3
Reserve Ammo = 1 chit for every unit that can fire
Demoralized Command = Lost ½ of Victory medals; Effects

Hussite unit types (not sure if any formed crossbowmen/handgunners are really appropriate, and Cavalry and formed melee infantry would be very limited. At the start of the revolt, many units would likely be raw, built by the later years, some might well rate Veteran status. The various Hussite sub factions would have some differences as well - the more radical perhaps warranting Veteran as Fanatics, and the more moderate having better equipped, trained, and more numerous Cavalry (pro Hussite nobles and their retainers). Mobs of pilgrims/fanatics might also be a possibility.

Crusader/Teutonic Knights unit types (adapted from the TtS Teutonic Knights listing)
I need a few Turcopole type figures - I used Renaissance Stradiots as stand ins as seen in the pictures above!

Email ThisBlogThis!Share to TwitterShare to FacebookShare to Pinterest
Labels: Assyria, Egyptians, Hussites, Teutonic Knights, The Portal, To the Strongest