A bit more on Norway during the Napoleonic Wars. First, some more Danish/Norwegian re-enactor shots below and throughout this post. 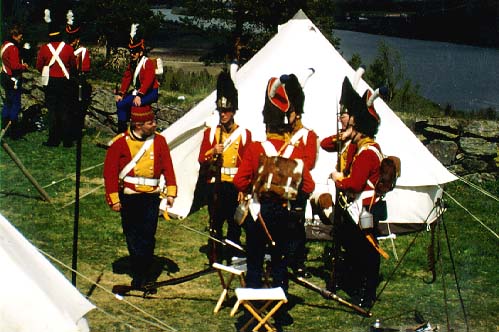 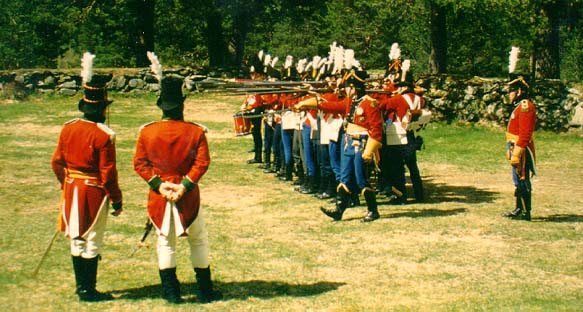 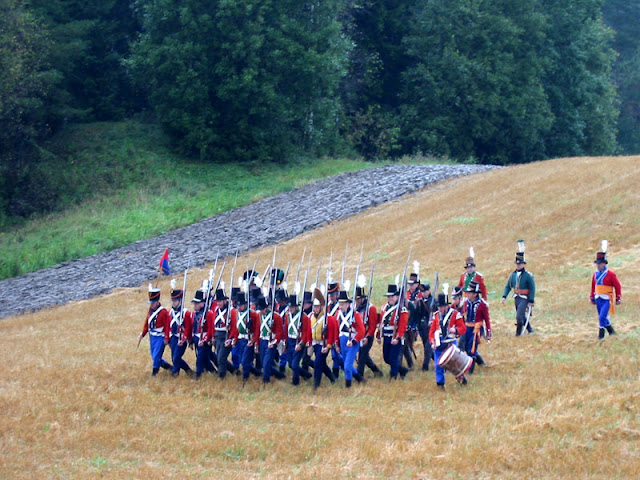 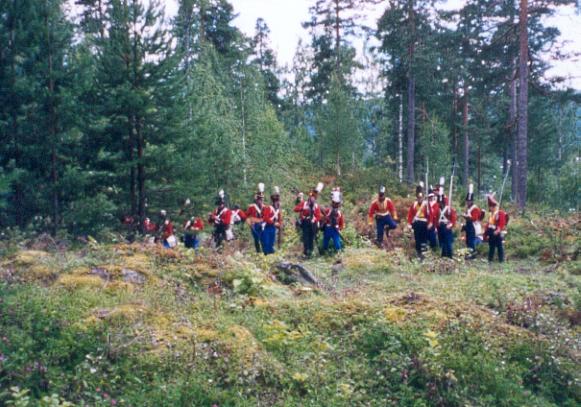 My 2 previous postings on  Norway during the Napoleonic Wars, The Norwegian Army of 1808, by Eric Starnes, and The Norwegian Army of 1814, had both suffered severely, as many of the great photos I used form the Elverum Ski Company were lost when their site went of line. Fortunately, I was recently able to recover them, and thus the posts are again much more colorful and well illustrated!


The following post is slightly edited from:
http://www.militaryphotos.net/forums/archive/index.php/t-33130.html
(sadly, this link too appears now invalid)

A brief look at the political background of the war
In 1814 the Napoleonic wars were over, (although Napoleon would come back to power once more, and fight Waterloo in 1815) and the victorious British and it's allies divvied up the booty. Sweden had fought on the side of Britain under the promise of receiving Norway, which at that time was a part of Denmark. The Kiel peace stipulated that Denmark signed the territory of Norway over to Sweden.

The Norwegians had since the 1700's grown tired of the Danish-Norwegian union, and had a wish for independence and self rule. So when the chance appeared, we grabbed it. In May 1814 the Norwegian constitution was written in a matter of days, and the Danish prince Christian Fredrik was chosen as the king of Norway on May 17th, and on this day the constitution of Norway was signed.
Representatives of Britain, Prussia, Russia and Austria went to Norway to attempt to persuade us to accept to join Sweden. They failed, and left Norway on Juli 17th. 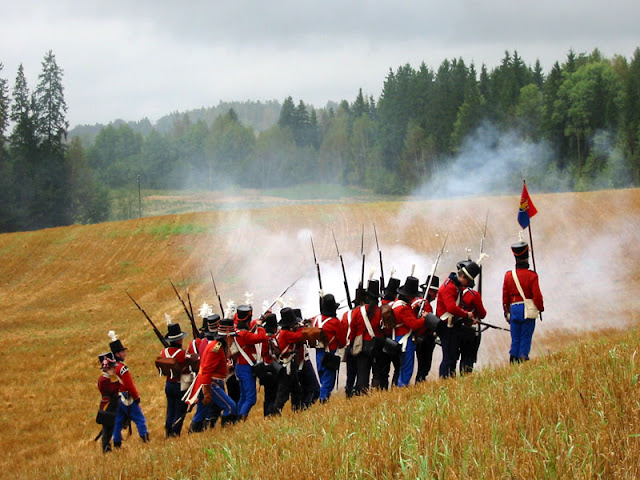 A look at the armed forces of Norway and Sweden
A Swedish army of 45 523 men was raised, and the fleet was fitted. The Swedish navy consisted of: 4 ships of the line, 5 frigats, 24 smaller vessels and 60 gun sloops.
King Karl the XIII was very interested in ships, and had supreme command of the fleet.  Under him Admiral Johan Puke had the operational command.

To face this force the Norwegians had an army of approximately 30 000 men and a fleet consisting of 160 vessels of various size. The Norwegian army was in a pitifull state, poorly equipped, poor morale and incompetently led. From the Swedish side it was said that “There is no Norwegian General who knows how to wage war.”  There is most likely something in this saying, considering that  King Christian Fredrik himself, only 27 years old, had no experience in leading an army in the field. 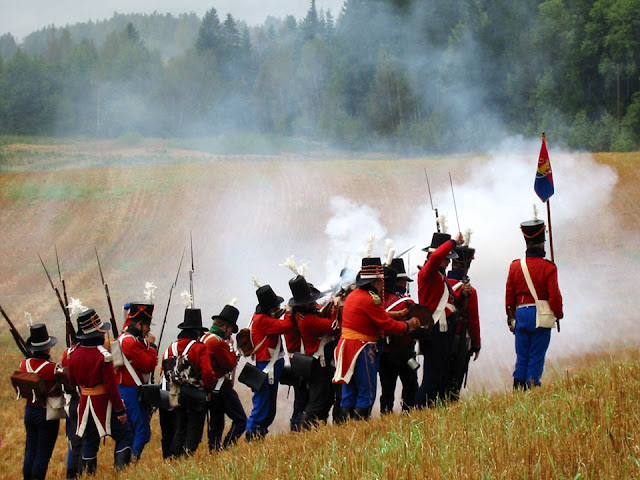 The combat operations of the war
On July 12th Prince Regent Karl Johan leaves Stockholm to take command of the forces assembling on the Swedish-Norwegian Border. After yet another attempt at a diplomatic solution with the Norwegians, he orders hostilities to commence.

Lier, August 2nd 1814
The night before August 1st the Swedish cross the border in 3 columns at Magnor.
This force consisted of 5 batalions infantry, Västerbotninger and Värmlandske Jegere (skirmishers\light infantry) and 8 three pounder guns. They were led by Colonel Gahn.

The two forces were relatively equal in strength, although the Swedes were better supplied with cannons and had more officers and NCO’s.
Both sides over estimated each other in the beginning, and therefore acted carefully.

Throughout August 2nd there was several minor skirmishes between Norwegian outposts and the Swedish forces. The Norwegians retreated towards Lier, it appears that Lt. Colonel Krebs at first thought to meet the Swedish east of Lier, but changed his mind and pulled his forces into the Lier position.

Between 16 and 1800 hours the 3 Swedish attack columns marched on the Norwegian positions, and the main attack started. The central colums, led by Colonel Gahn himself, went head on the center of the defences at Lier, where a total of 8 companies was positioned, but after repeated attacks none of them reached further than the glacis.

At the same time the left Swedish column attacked the Norwegian western wing, hoping to threathen it and forcing them to redeploy troops from the center. This attack failed mostly due to difficult terrain and two cannons under the command of Lieutenant Kjerulf.

The right swedish column attacked on the eastern side of Vinger Lake, and was to attempt to go around the lake and threaten the Norwegian flank. This was right were Skiløperne (ski troops) was positioned and some of the hardest fighting during the battle found place.
The Norwegians were hit hard and were forced to withdraw.

This is when the Norwegians discovered the poor quality of the Norwegian gunpowder, the Swedes could shoot at ranges over 400 alen (250 meters) while the Norwegian marksmen could only use their rifles out to 200 alen (125 meters).
But it was said that the Norwegians were better shots than the Swedes, and therefore should compensate for it in this way. Skiløper Ola Brænd from Stor-Elvdal, who fought at Lier said this: ”The Swedes hadn’t gotten any further with their shooting in 1814 than they were in 1808, they fired volleys, every man at once; the norwegians prefered to do it the skirmisher way og shot more on their own.

After a while the Swedish column came so close to Lier that it came under fire from two amusetter(?) there. This caused the column to retreat, and skiløperne and the marksmen recaptured their lost terrain. [Blog note - "amusette" is an old term for small cannons, in this case probably Norwegian 3 pounders]

The Swedish disappeared into the woods towards Malmer, and Lt. Colonel Krebs released his small cavalry force who pursued them for a while, untill a Swedish Artillery volley caused them to retreat.

Aftermath of the Battle of Lier, August 2nd 1814
On the battlefield less than 30 Norwegians and 130 Swedish soldiers lay dead.
The Swedish retreated to Malmer and continued the next day towards Matrand\Midtskog.
Colonel Gahns plan was to return to Sweden on August 5th.
How his plan to return to Sweden ended will follow. This turned out to be more than i expected. 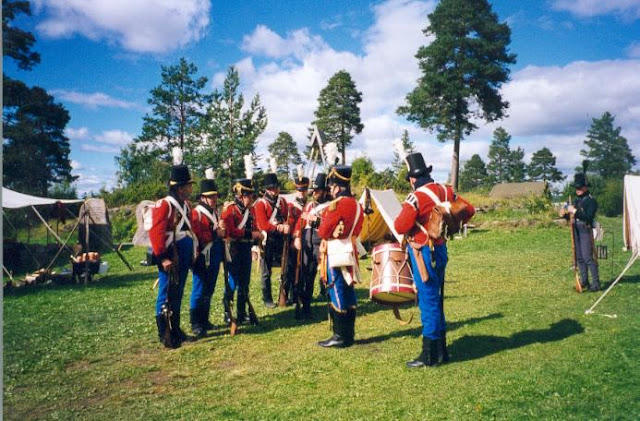 The days after the battle at Lier
After loosing at Lier, Gahn retreated to Malmer (August 3rd) and continued the next day (August 4th ) on to Matrand\Midtskog, (the two places are near each other and there has been some disagreement as to which one it is) where the infantry camped for the night while the baggage train went to Skotterud.

Lt. Colonel Krebs had pursued his enemy, and had managed to catch up with him. On the Night leading up to August 5th he attacked Colonel Gahns force at Matrand\Midtskog with half his force, while the other half marched on Skotterud to capture the Swedish baggage train, set up a defence and attack the Swedes from the rear.

A smaller force broke of to the west to attack the Swedish left flank, while Krebs himself led the main attack force onto the Swedish head on.
At 0300 hours Krebs launched his attack on the Swedish, and when the flank attack came 1 hour later, Colonel Gahn retreated towards Skotterud. Unfortunately for Gahn Norwegian forces already held Skotterud. The result was the hardest fighting in the entire 1814 campaign.

After repeated attacks the Swedish forces managed to fight out of the Norwegians surrounding them, but it came at a high cost of men, horses and materiel for both sides when combat ended at 1100 hours, August 5th
Lt. Colonel Krebs said afterwards: (my translation from the Danish spoken in Norway in those days might be a wee bit off) A more horrible and furious affair on both sides than this can not be considered possible between two as small units as this.
(Gahn entered Norway with 1400 men, Krebs marched from Lier with 2500 men).

The Swedish force lost approximately 350, of which around 250 were prisoners of war.
They had also lost the baggage train, and was forced to abandon 1 Gun, 7 ammunition wagons, 20 train wagons and 60 horses.

The Norwegians lost more than a hundred men killed and wounded. There was also casualties among the officers. A Lieutenant Norgren had been in a hurry to get gunpowder for his men, and had tried to open a ammunition wagon by knocking off the lock with an axe. This resulted in the entire Ammunition wagon to explode, increasing the casualty numbers. 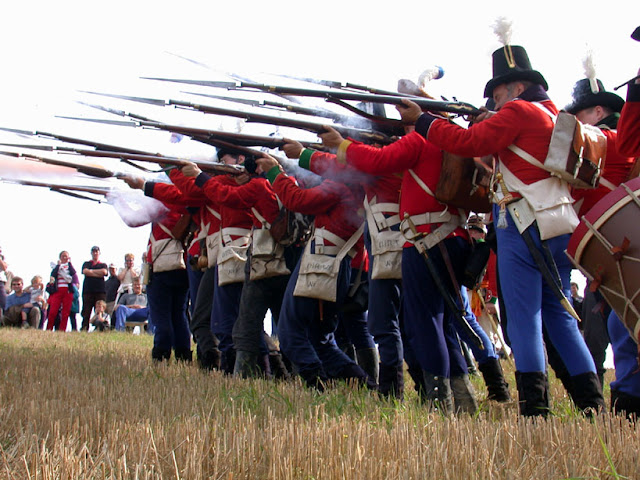 The end of the war and the aftermath
This was not the main battle of the war, or would not have been, had the main forces of both sides actually fought. By August 14th there was a cease fire in effect, and Sweden's last war was over.

The reason we agreed to a cease fire was that, although successful in minor battles, the Norwegian army was in too poor a shape to wage a large battle against a large Swedish force.  But the fighting of August 1814, and the lives lost, was not in vain. Norway agreed to join in a union with Sweden, but retained a certain amount of self management, and we got to keep the constitution the brave founding fathers wrote up in a few days, and signed on May 17th 1814. This day is the national day of Norway. 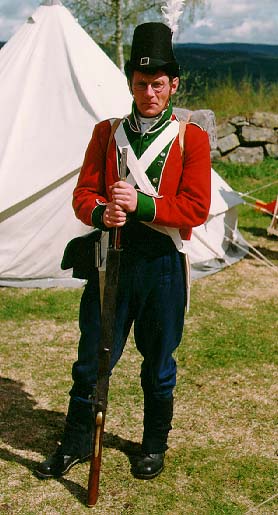 The union with Sweden lasted till 1905, and this year is Norway’s 100 year anniversary.  Another Swedish prince was chosen as the King of Norway in 1905, and took the name of Haakon and became king Haakon the 7th of Norway.  His wife, princess Maaud of England, became the Queen of Norway, and their child, whose name was changed to Olav, became the Heir Prince of Norway. He was later to become King Olav the 5th of Norway.

The men who formed my country and wrote it's constitution never got to see it used in a Sovereign nation, but they shaped the future.

The Norwegian Flag and its evolution

On February 27, 1814, the crown prince CHISTIAN FREDERICK created the first distinctive Norwegian national flag. An expression of local opposition to the Swedish rule imposed on Norway, it consisted of the red Danish flag with its white cross, long used in Norway, with the addition of the Norwegian arms (a golden crowned lion holding an ax) in the upper hoist canton. In 1821 the Norwegian parliament developed the distinctive design in use today, although it faced a 77-year struggle to obtain Swedish recognition of its legitimacy. Designed by Frederik Meltzer, the new pattern consisted of the white cross on red, used in the Danish flag, with a blue cross superimposed for distinction. The Swedish king refused to allow use of the flag on the high seas until 1838, and even then Norwegian ships were warned that they would not be protected if they did not fly the official Swedish-Norwegian union flag.

On June 20, 1844, the new Swedish king, Oscar I, established a new union symbol by combining the Swedish and Norwegian crosses. Each kingdom was to fly its own flag but with that emblem added in the upper canton. While this gave greater recognition to the flag Norwegians preferred, it was still not the “clean flag” they felt entitled to. The union mark was derisively referred to as a “herring salad,” and contention between the two countries continued. The Norwegian parliament approved a law removing the union symbol from their flag in 1893, in 1896, and again in 1898. After their third approval the king was obliged by a provision in the constitution to sign the law into effect, which he did on December 10, 1898. The clean flag was officially hoisted on December 15, 1899, and six years later Norway separated peacefully from Sweden. 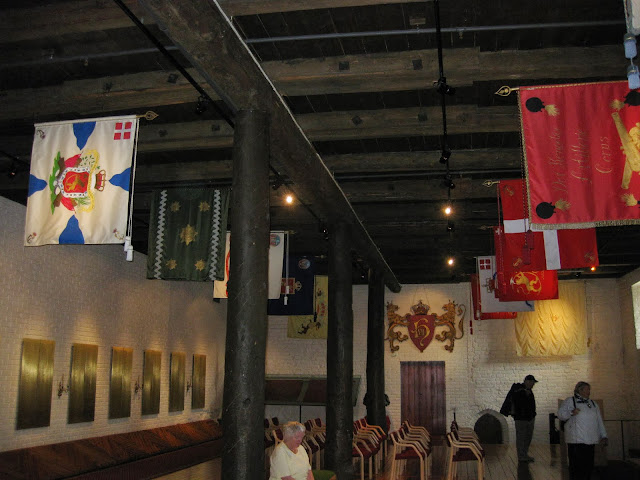 Norwegian standards through the ages
From a Blog post with some great pictures from the Norwegian Armory in Trondheim:
http://thewargamingmegalomaniac.blogspot.co.uk/2014/01/2009-armoury-trondeim-norway.html 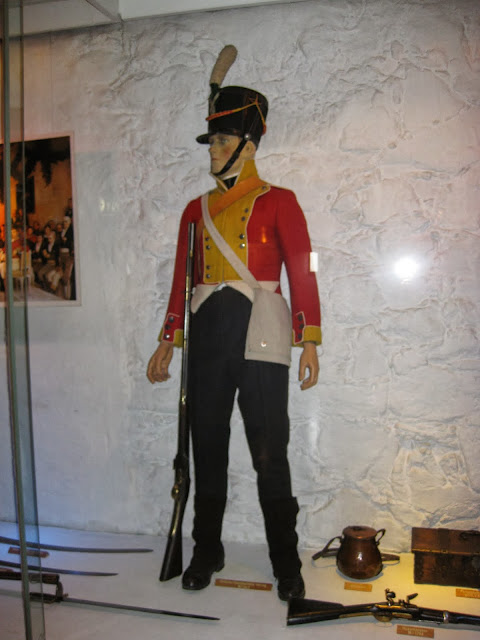 From the same post, a Norwegian infantryman of 1814. By the yellow facings, he is likely from the Trodheim regiment. Check out all the great pictures from the museum captured on his blog! 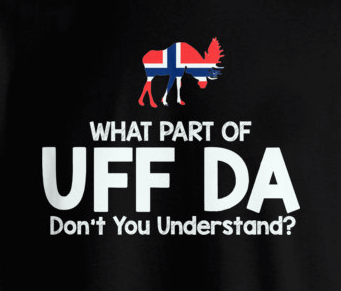 Because of my Scandinavian (Danish) ancestry, my Norwegian and Danish patients have tried to reconnect me with my roots over the years...
Posted by Gonsalvo at 8:41 AM