Here is the first of the two Polish Uhlan regiments I recently painted. I'll cover the uniforms of all of the regiments in the second such post later this month. these are the wonderful Murawski figures, in the "earlier" uniforms of the Duchy of Warsaw. The sources I used for uniform information were "poles and Saxomns of the Napoleonic Wars" by Nafziger etal, and the Rawkins E-Book on the Duchy of Warsaw. Both sources are very good, but Rawkins is probably more up to date (Nafziger';s book was published in 1991 - egads, 25 years ago now - and before there was good access to sources in Poland). While Rawkins book was first written well before even that, it has been extensively revised and updated twice. Mr Rawkins points out that the usual English designation as the "GRAND Duchy of Warsaw is incorrect;  in both French and German documents it is always referred to as the DUCHY of Warsaw, never as the GRAND Duchy. Somewhat shocking to me after all these years, actually! 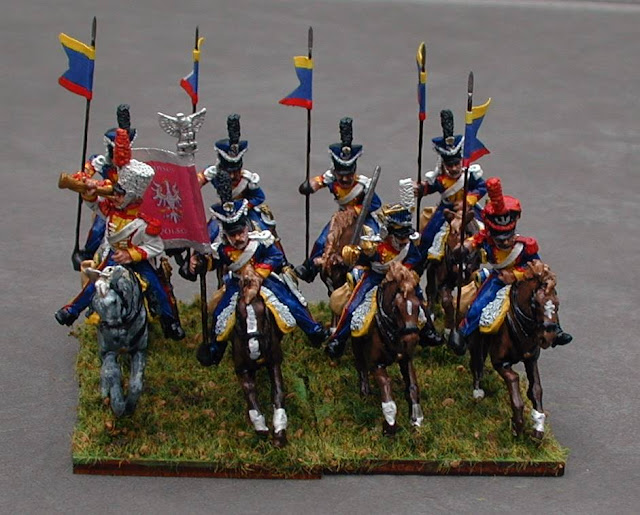 This colorful unit is the 7th cavalry regiment of the Duchy of Warsaw (Uhlans). Note the beautifully sculpted silver eagle plate on the fur covered shako of the Elite company trooper. 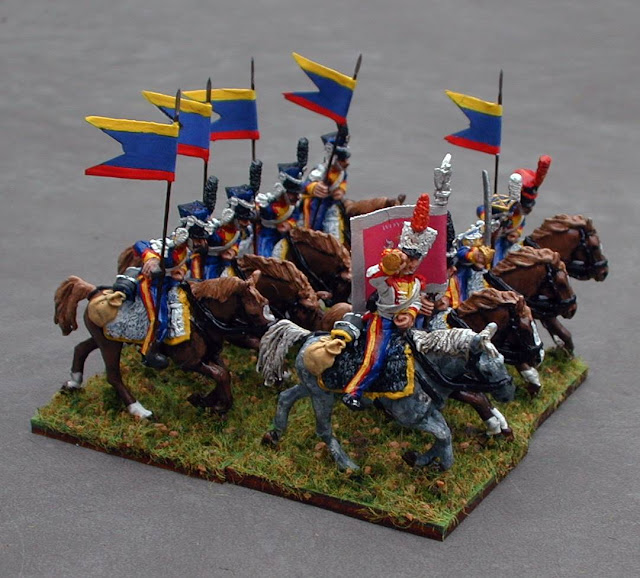 The 7th was unique in having yellow facings piped in red. The double stripes down the outseam of the dark blue pants are briefly described as "yellow, but I went with yellow piped in red on the outsides, which I think is quite striking. Call it the whim of the Colonel! 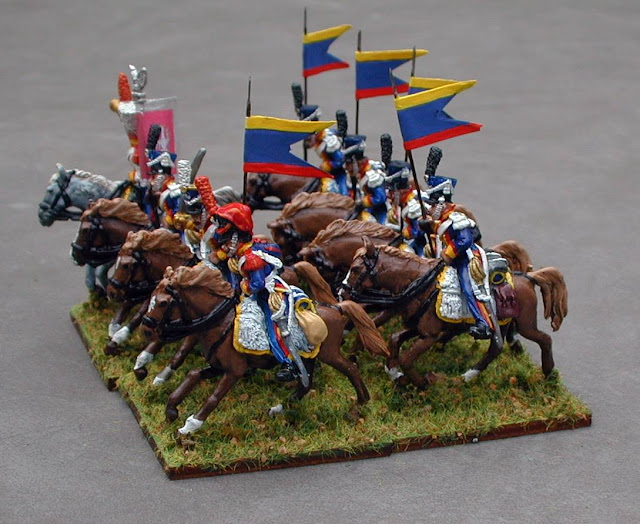 The Elite company was distinguished by wearing a shako covered with black or dark brown fur, with a red plume and a red, unpiped bag and tassel. The epaulettes were, with an exception or two obn;y, red for the elite companies.  I've used some orange to highlight the red of those plumes, bag and epaulettes. 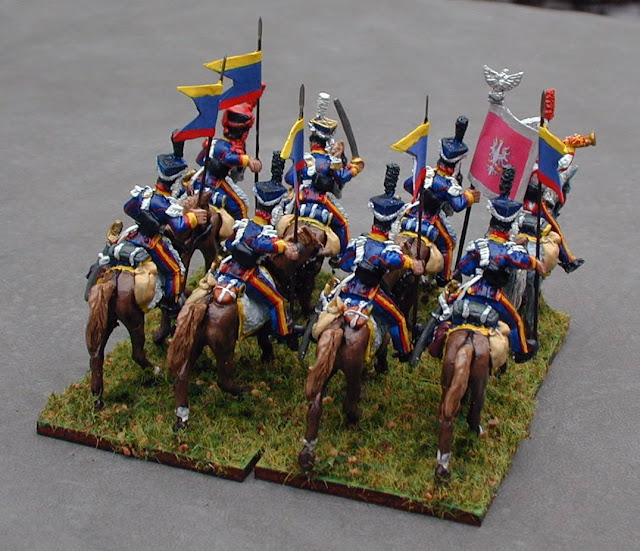 Each Uhlan regiment also had piping on the back seams of the jacket and sleeves, the color of which varied by regiment. In the case of the 7th, the piping was red (scarlet). 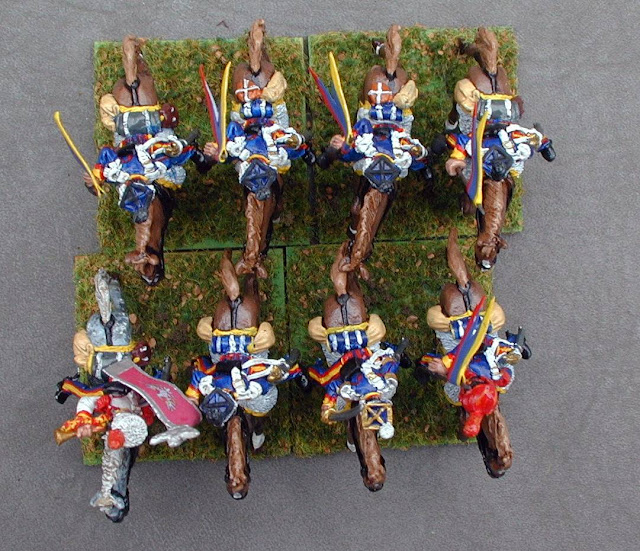 This top view shows the black tape on the top of the dark blue "box" of the czapska (gold for officers), which was common to almost all regiments. 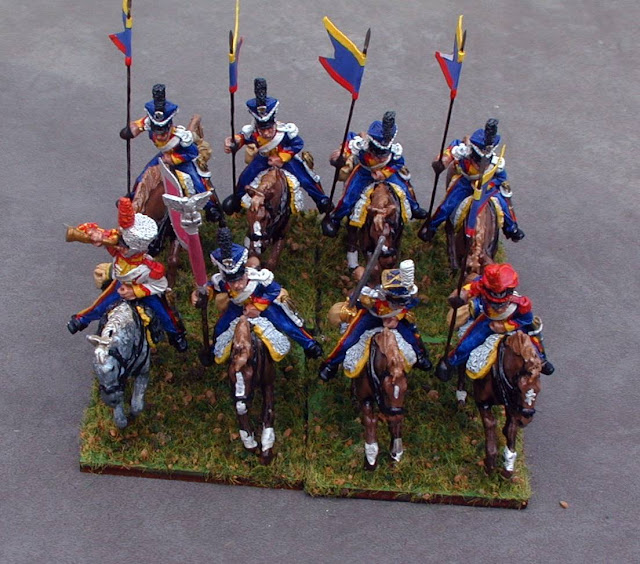 The cords and epaulettes were white for the center companies of all regiments. 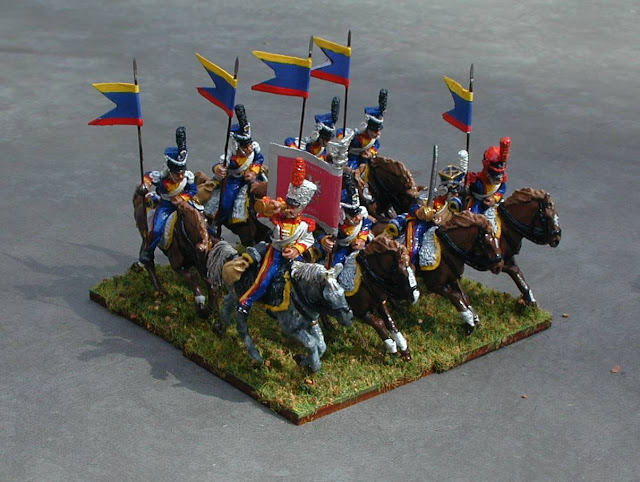 As was most often the case for Polish cavalry regiments, the Trumpeter wears a white jacket with regimental facings, a white fur covered shako without bag, and red plume and epaulettes. Very striking! 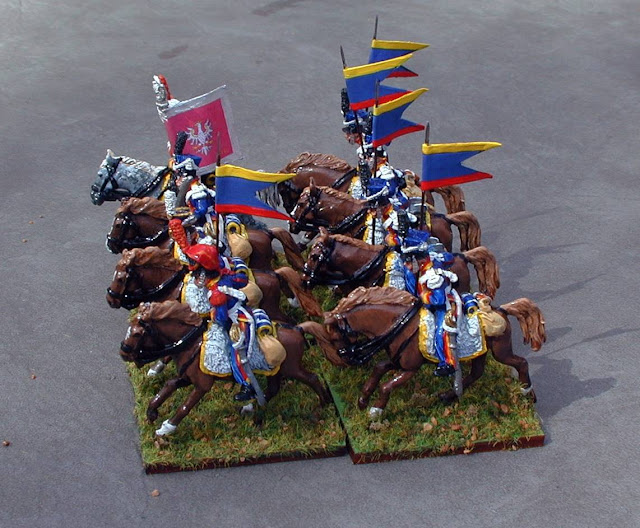 The color of the lance pennons varied for each regiment (and also changed with time). the 7th is recorded as having yellow over dark blue over red pennons, thus neatly mirroring the main colors of the unit's uniform. Also very cool! 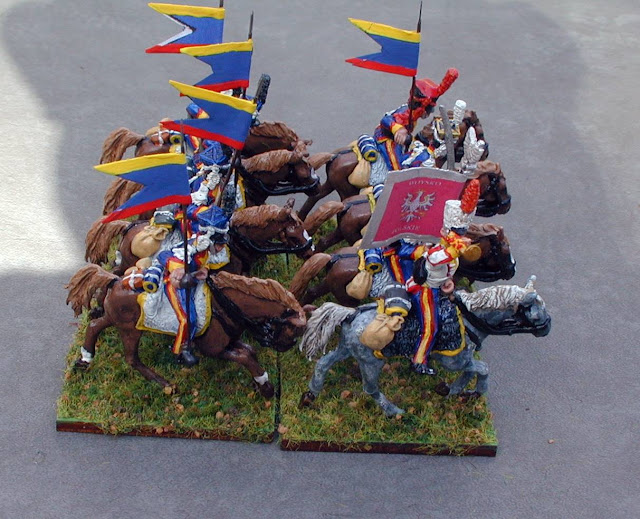 The basic pattern of the flags and Eagles of cavalry regiments was the same for all regiments, with minor variations - crimson with a silver Eagle and broder. The regimental number on yellow Roman numerals was often inscribed on the flag as well. 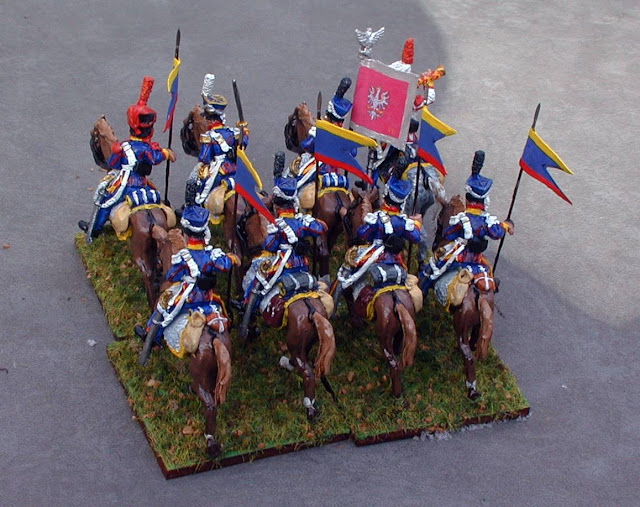 Note the variety of encumbrances on these Paul Hicks horses! 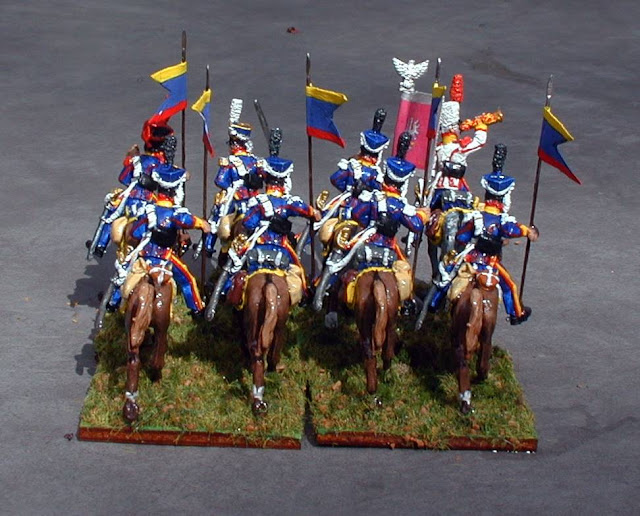 Higher officers of the Regiment had white plumes in place of the black ones worn by the enlisted men of the center companies, and silver cords in place of white on their czapskas. 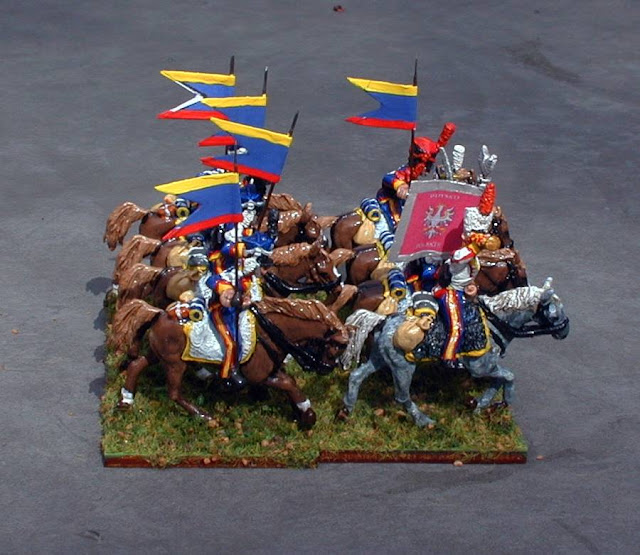 In full dress, the horses of the 7th would have had dark blue shabarques trimmed with yellow (silver for officers). However, these expensive items were seldom seen in the field, being replaced by white sheepskins (black for trumpeters), edged in the regimental color, in this case, yellow. This pattern is, however, still seen on the valise (portmanteau)- dark blue piped in yellow. The regimental number might also appear on the round ends of the valise, in this case in yellow embroidery (I'm not good to enough to paint that here!).

ADDENDUM April 10, 2016:
Some errors and/or additional information were pointed out to me:

The 7th regiment had yellow epaulettes, an apparent peculiarity of this regiment alone.
Regiments elites also wore scarlet aiguilletes at the left shoulder, a practice possibly adopted by other regiments also.

I am unable to confirm this, and may have varied by year. Rawkins kists many epaulette variations, but not this one.


As for the czapskas : the "box" of blue cloth and leather cap was separated by a 2cm width of WHITE tape. The upper edge of the box was trimmed with white piping which also formed an X corner to corner on the flat top of the cap.

I intentionally left out the white tape between the box and the cap, as it is largely obscured by the cords anyway. Rawkins says white tape on the top of the Czaopska in 1807, but black from 1809 on, and that is what Chelminski's plates show as well.

This was my error. I couldn't find the detail in Rawkins or Nafziger, and the Chelminski plates are such that it was hard to tell. So I guessed... poorly!


Peaks were black leather and trimmed with brass.

Correct, and as I went back and changed the chin scale metal, I also painted the brass edging on the peaks.


The girths were for the troopers and black for officers.

This detail (black for the officers) isn't mentioned in either of my sources, but close examination of the Chelminski plates in Rawkins would seem to confirm black girth (and shoulder belts) for the officers, so I have changed that as well. 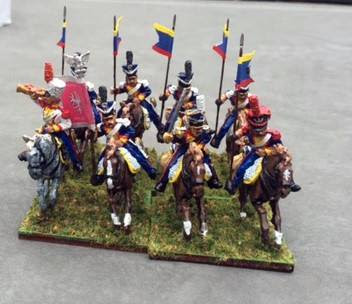 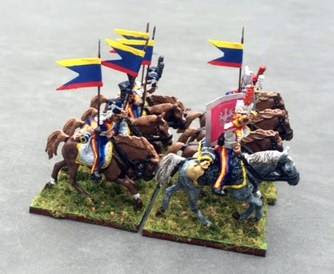 While I had the black out, I also painted the opening of the bell of the trumpet black. 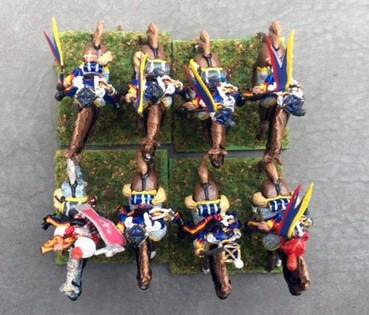 Although you can barely see it here, while I had the brass out, I also added the bras "points" at the corners of the czapska.