First off, the sale notice as it runs out in a few days, From their FB page:
I'd just like to thank everyone for supporting us at Salute. We've never been before but we had a great show.
There were some great deals on our figures there and as a thank-you for all your support I am going to offer all my regular customers the same deals we had on offer for one week only!
The following deals are available until the 22nd April 2016. (Extended to April 24th)
20% off all Baden unit and battalion packs
10% off all Polish infantry and artillery unit packs
10% off all Polish infantry and artillery battalion deals
10% off all Polish cavalry and mounted command packs.
5% off all Polish cavalry unit deals
Free shipping on all orders anywhere in the world over £100 ( after discount ).
Again, thanks for all your support.

So, if you were thinking about ordering some of their excellent figures, especially those Badeners (and especially from outside the UK due the free shipping), do it TODAY!  :-)

I mean, I need them to make the Baden Light Dragoons and Artillery, right? So *I* need you guys to buy lots of Badeners to convince them to do the whole army!  The Baden Jagers are already in the planning stages, and they have a glorious and distinctive uniform. I already have that unit from the defunct Pontoonier figures myself, though (see the Baden label on the side bar). 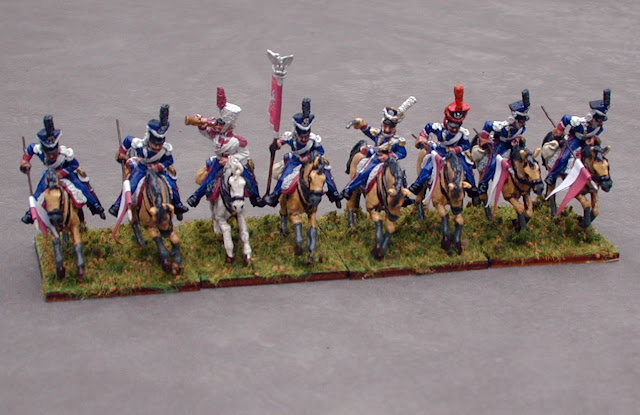 This is the 16th Uhlan regiment of the Duchy of Warsaw. 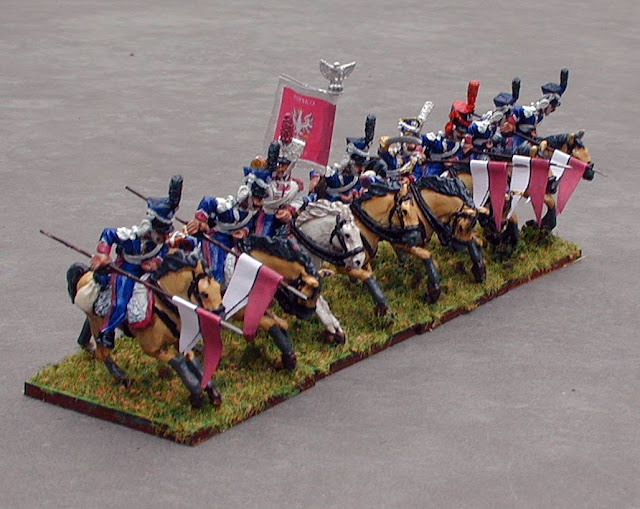 "Pretty in Pink", or rather Polish Crimson. This color is depicted anywhere from a dark, purplish red to the lighter shade I have chosen here. I used Delta CC Dusty Mauve darkened with a bit of Americana Deep Burgundy (which would itself work well for the darker interpretation of "Crimson". 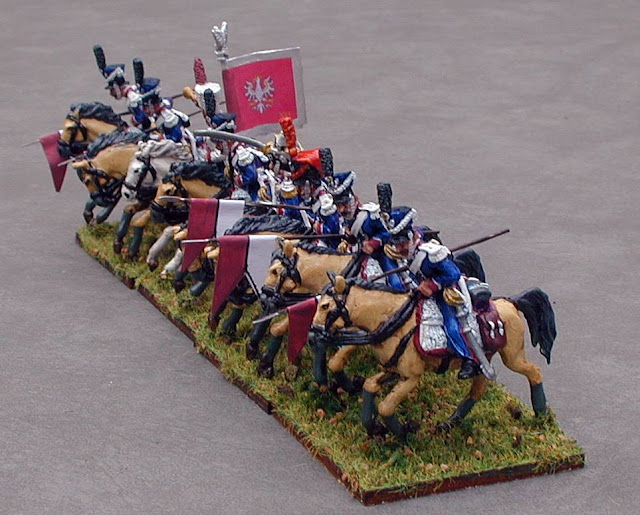 This unit had dark blue lapels piped white, collar, cuffs, and turnbacks crimson piped white, and crimson piping on the seams of the jacket and the trousers. Crimson piping on the sheepskins, and crimson over white lance pennons. The sheepskins should perhaps be the other way around, though - back for troopers, white for the trumpeters. I changed my mind on this unit half way through, changing from the 12th to the 16th. Regardless, I think their uniform is quite spectacular! 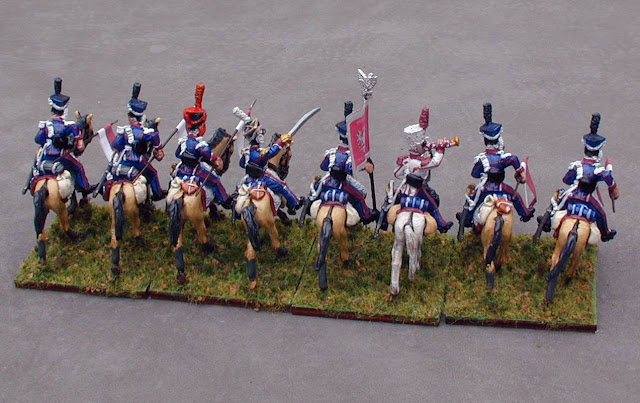 According to Rawkin's excellent "Uniforms of the Duchy of Warsaw", this regiment had white epaulets for the elite company instead f the usual red, and crimson plume an epauletes for the trumpeter as regimental idiosyncrasies. 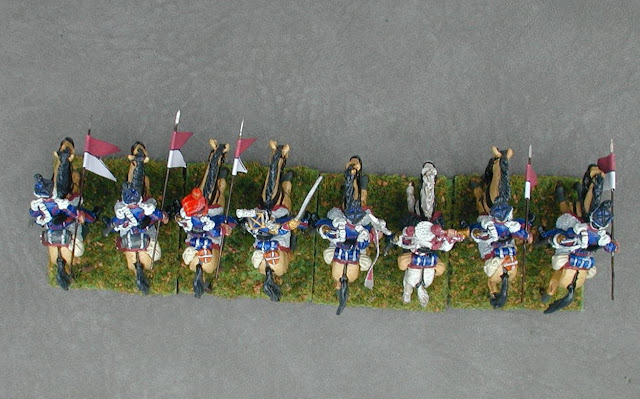 A (? white Polish) eagle's eye view of the 12th Uhlans from above!

With regard to breeches, Rawkins says:
"From 1808 dark blue, tight fitting, overall trousers were issued for all regiments with a wide double stripe on the outer seam of the regimental piping colour.  The exceptions to this rule were the 2nd, 3rd and 7th Regiments who had yellow stripes.  For campaign wear and fatigue duties the tight fitting overalls were replaced with heavier loose fitting trousers of dark blue with black leather inserts and cuffs and a single narrow stripe on the outer seam with a row of small brass buttons on the stripe.   By 1812 most campaign wear overall trousers were dark grey with black or brown leather inserts but no stripe or buttons."  Rawkins also has extensive details on variations in lance pennon colors, epaulets, Elite company and trumpeter dress by regiment, even sometimes by year. If you are going to paint the Poles, BUY HIS BOOK!

On the other hand, Per Nafziger's "Poles and Saxons of the Napoleonic Wars, we have:

Nafziger also shows some trumpeters in reverse c0lors, probably incorrect, but I went with it on my earlier Minifigs Uhlan regiments of the Duchy of Warsaw.

Phew, that was a lot of material to cover! See my earlier post on the 6th regiment for additional details of the dress of the Uhlan regiments, or better yet, buy the Rawkins ebook for abut $6!
Posted by Gonsalvo at 10:22 AM