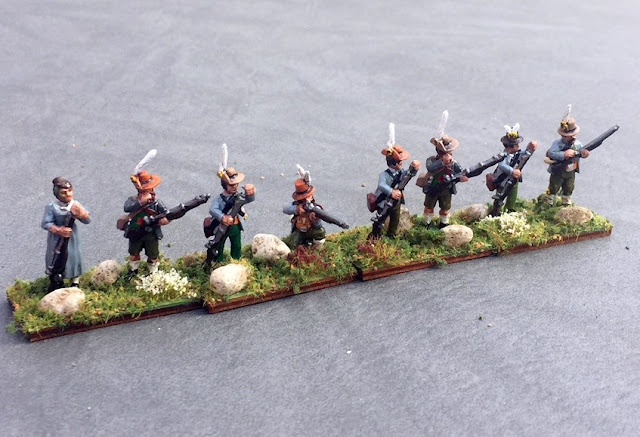 The penultimate Schutzen unit is this one lead by Ernst Stripsenjoch. 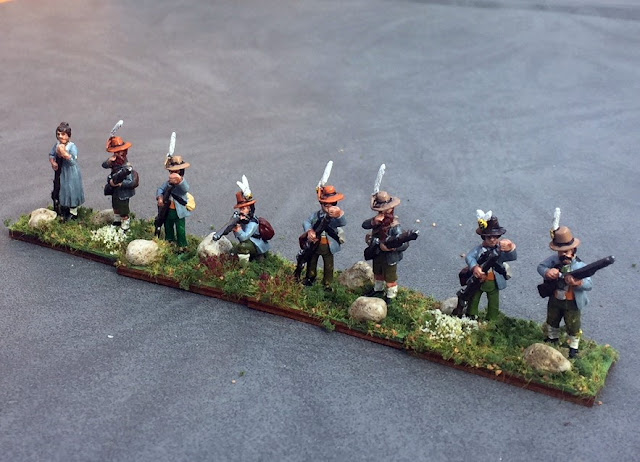 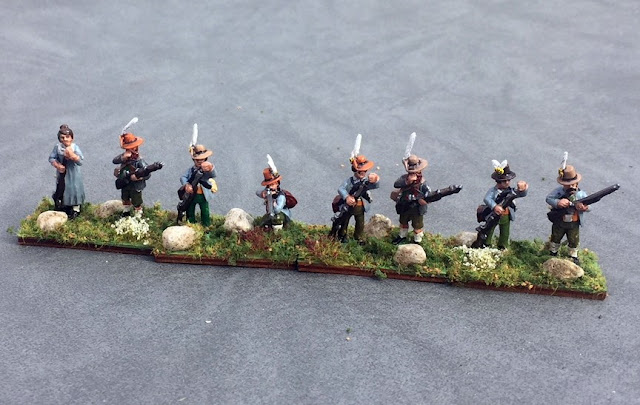 Enst is a loud, boisterous fellow. He reminds one of that guy in your high school gym class who'd toss his athletic supporter at someone near him as he headed off to the showers! 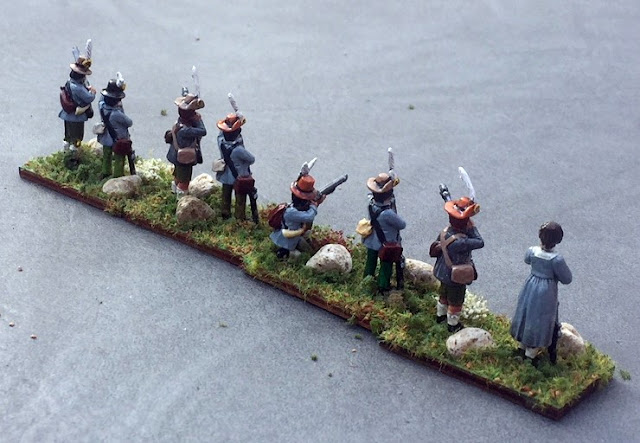 
The freedom of the Tyrol was not to last long. The treaty of Vienna, between the Emperors of Austria and France, was signed. It did not even mention the Tyrol. It was a tacit understanding that the mountain country was to be restored to Bavaria, and to reduce it to obedience three fresh armies crossed its frontiers. They were repulsed in the south, but in the north Hofer, under unwise advice, abandoned the anterior passes, and the invaders made their way as far as Innsbruck, whence they summoned him to capitulate.

During the night of October 30 an envoy from Austria appeared in the Tyrolese camp, bearing a letter from the Archduke John, in which he announced the conclusion of peace and commanded the mountaineers to disperse, and not to offer their lives as a useless sacrifice. The Tyrolese regarded him as their lord, and obeyed, though with bitter regret. A dispersion took place, except of the band of Speckbacher, which held its ground against the enemy until the 3rd of November, when he received a letter from Hofer saying, "I announce to you that Austria has made peace with France, and has forgotten the Tyrol." On receiving this news he disbanded his followers, and all opposition ceased.


The war was soon afoot again, however, in the native vale of Hofer, the people of which, made desperate by the depredations of the Italian bands which had penetrated their country, sprang to arms and resolved to defend themselves to the bitter end. They compelled Hofer to place himself at their head. 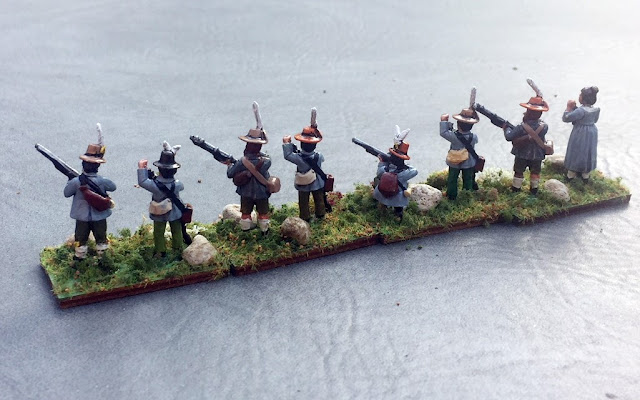 For a time they were successful. But a traitor guided the enemy to their rear, and defeat followed. Hofer escaped and took refuge among the mountain peaks. Others of the leaders were taken and executed. The most gallant among the peasantry were shot or hanged. There was some further opposition, but the invaders pressed into every valley and disarmed the people, the bulk of whom obeyed the orders given them and offered no resistance. The revolt was quelled.

Hofer took refuge at first, with his wife and child, in a narrow hollow in the Kellerlager. This he soon left for a hut on the highest alps. He was implored to leave the country, but he vowed that he would live or die on his native soil. Discovery soon came. A peasant named Raffel learned the location of his hiding-place by seeing the smoke ascend from his distant hut. He foolishly boasted of his knowledge; his story came to the ears of the French; he was arrested, and compelled to guide them to the spot. Two thousand French were spread around the mountain; a thousand six hundred ascended it; Hofer was taken.
Posted by Gonsalvo at 4:43 PM