The long but ultimately successful siege of San Sebastian in the summer of 1813 eventually opened the way for Wellington to invade southern France. Here, I have simply appropriated the name for the game to differentiate it from the previous game in November. 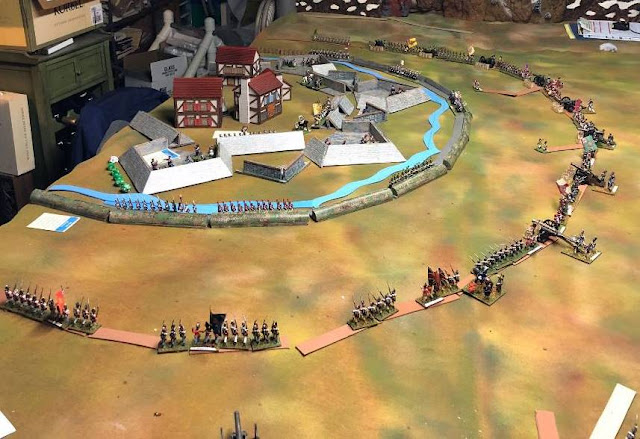 Per a new option in Eric's Vauban's Wars rules, we set up with the 2nd parallel already completed, but not, as Eric suggested, with the gun emplacements already constructed.  Personally, I think having the 2nd parallel completed is enough of a jump start for the besiegers all buy itself.

Barry and Marc played the British defenders, whilst John hurled defiance from behind the walls of Fortress once again. Joe had to cancel at the last minute..

Things didn't as smooth as I had hoped for as our home internet connection decided to go out as I was planning to re-read the rules and set up the garrison and besiegers the night before the game, and then I couldn't download the latest draft of the rules in their zipped format, and my new printer decided to act up, although fortunately I had already printed out all of the key components by then. To make things worse, I was super tired from work all the week before, as our Nurse Practitioner was out on vacation for 10 days, and thus I worked from 7 AM to 9 PM most days that week, and  another 4 hours the AM of the game, just to catch up on all of my back notes, etc. Ugh!

So, I significantly over-gunned the Besiegers; a result of doing it quickly at the last minute. 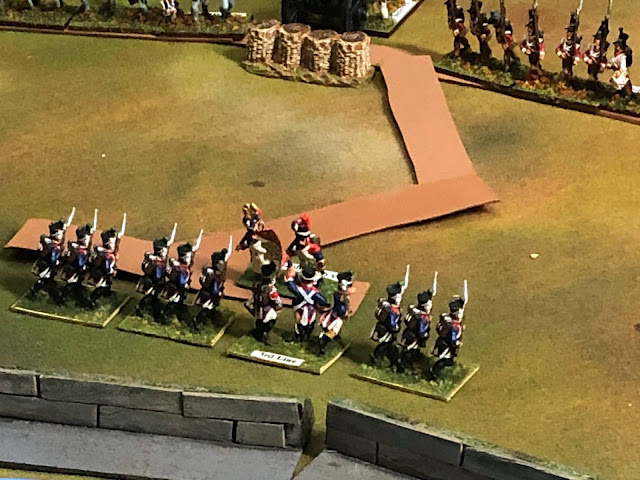 Despite having read the current draft of the rules this time, John was going to pass on the Trench Raid cards again. I disagreed, so here is a French Raid on a lonely Sapper working on digging the 3rd parallel. the sapper was routed back to the rallying point. After that, John began to like Trench Raids a lot! :-) Rechecking the rules, we found that each Trench Raid card could potentially allow up to 4 separate raids! The defender really needs to make good use of the raids to drive back sappers and gunners, and delay the progress of the besieger. 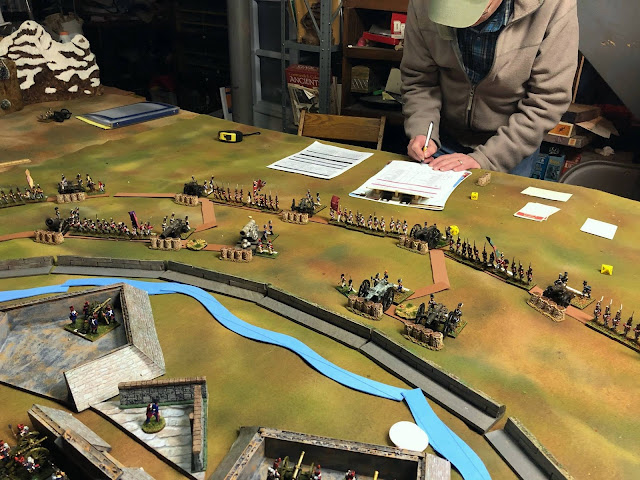 We used Mining for the first time in this game as well. here is Barry writing down the targets of his mines. He will use the same sheet to track their gradual progress towards his objective, while John uses counter mining to attempt to interfere. e had a much clearer idea of how to do that after the game as well. The round bases with assorted tools on them denote the two mine entrances. 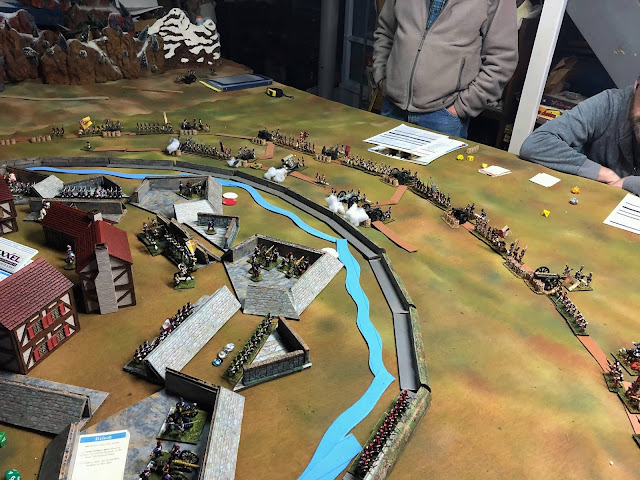 With the 3rd parallel partially constructed, and gun emplacements  ready, Barry and Marc begin to use "breaching fire" to batter down the tough walls of the Fortress (note poker chips - 6 hits so far on Bastion #2). In retrospect, the defenders could and probably should have contested the Covered Way (just beyond the "moat") until much later in the game. Units in the covered way cannot be targeted UNLESS they ascend the shooting step, in which case they can shoot (up to 6" for infantry) and be shot at. 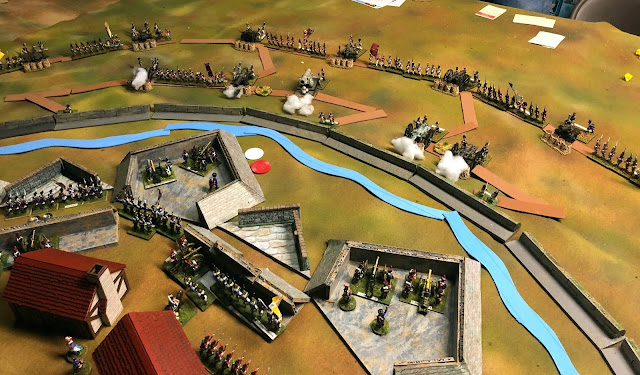 Tyhe British start to construct the 4th parallel right atop the Glacis. Units in the Covered way could have been very effective at putting a stop to that!  In fairness, Barry and Marc drove the French back from the covered way with artillery fire, but the defenders needed not be exposed to that until they popped up to shoot themselves! We also assumed, incorrectly as it turned out, that the Covered Way had to be manned to launch continued Trench raids - not true! 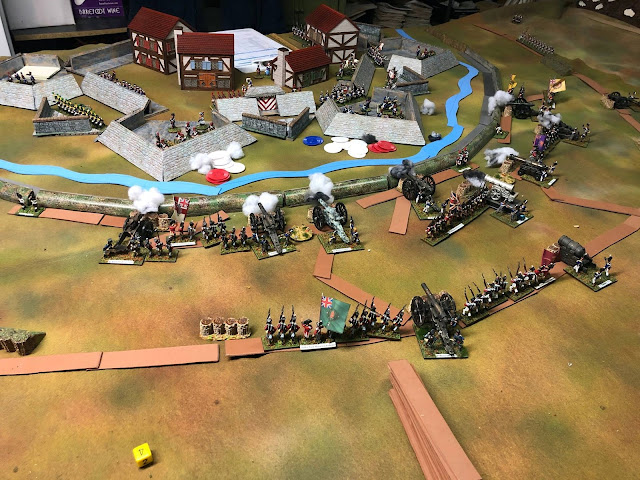 The siege guns are really battering the walls of Bastions # 2 and #3 (either side of the gate). Still, 70 hits is a LOT, and the defending sappers can repair some of the damage. 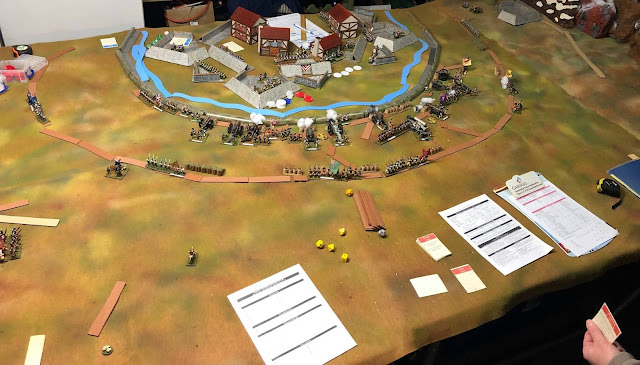 Overview of the Siege. Bastion #2 has been breached! On balance, the various errors we made in play this time favored the besiegers a lot, especially the enormous numbers of siege guns used by the besiegers, and overlooking as key "Up 1" modifier for fire from the Fortress. 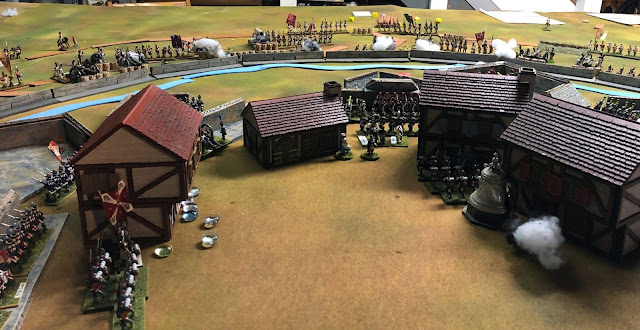 The French view from inside San Sebastian, as a mine blows up under Bastion #3, severely weakening it, but not yet collapsing it. The enemy siege mortars are lobbing shells into the town itself, eroding their morale, but not very effectively this time (Eric made it harder 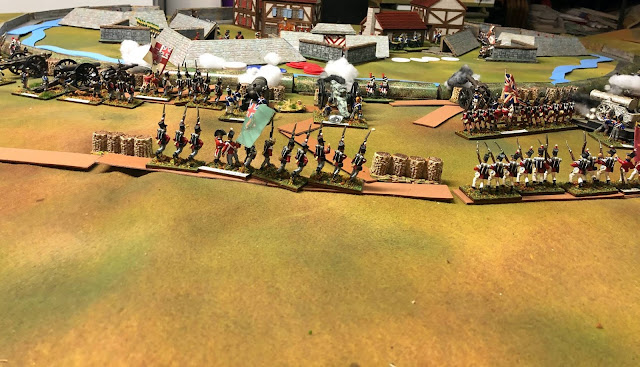 Shortly afterwards, continued heavy breaching fire by the British collapsed Bastion #3 as well. Each breach costs the Garrison additional morale loss as well. With no relief army in sight (Soult historically broke the siege of San Sebastian once and almost did a second time), John sues for terms, and the garrison marches out with Honors of War. This avoided the ugly pillage and burning of the town that followed the actual successful British/Portuguese assault on the Fortress. 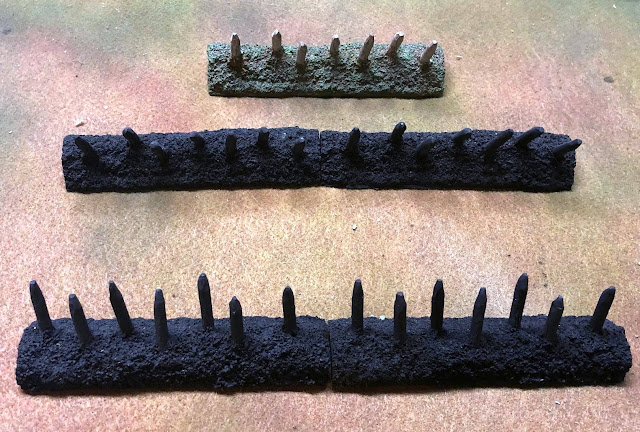 In the process of preparing for the game, I discovered some long lost additional entrenchment pieces to be painted... 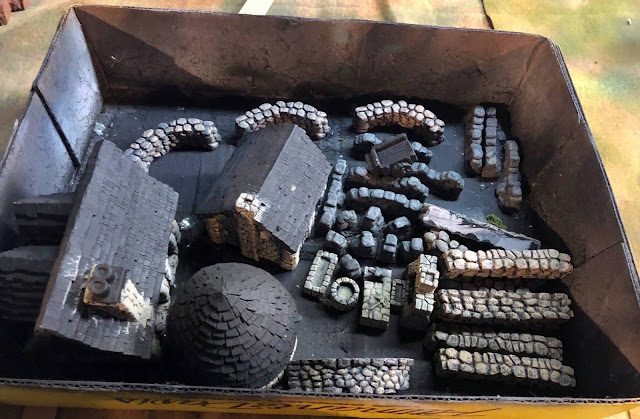 As well as some further items - more stone walls, a well, a cart, a cottage, and a smithy. I believe I purchased these at Historicon 2009, and started them but then they got buried under assorted gaming detritus, and overlooked. An early Christmas present!


Due to the many errors I made, I plan to do a final solo playtest over the Holidays. This rules set would be an excellent candidate for a you tube video illustrating the play. Eric hopes to publish Vauban's Wars in the first quarter of 2020, and I am strongly considering running a game with them at Historicon 2020 as well.
Posted by Gonsalvo at 11:28 AM