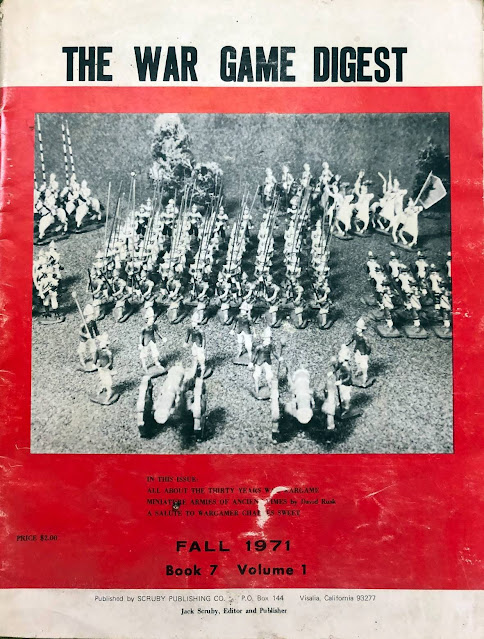 AS many of you doubtless know, Jack Scruby had a major role in the development of miniature wargaming as it stands today, both as a designer and manufacturer of wargames figures (the first armies that replaced my original flats were Scruby miniatures, augmented by a few Hinton Hunts  for specialty figures), and as the publisher of the first wargames magazine, The Wargame Digest, beginning in 1957. By 1960, there were 2 US editions per year edited by Jack, and 2 British editions edited by Don Featherstone and Tony Bath. By the end of 1962, as Jack says, "editorial differences" between the American and British edition ended The Wargames Digest, and lead to birth of Don's great Wargamer's Newsletter. The above was an attempt to restart WGD on a cash per issue basis, with no subscriptions. There was never another volume after this one, though. The articles, several of them reprints from earlier Scruby "House Organs" were all very interesting: Editorial, The Story of Wargame Digest, The Doublecross!, Lead Soldiers in the News, The Senegal Revolt, 1878, Part 1 *from a fictional campaign set in Scruby's "Mafrica"), From Out of the Past, All About Wargames: The Thirty Years War (rules set), Ancient Armies in Miniature, The Civil War - Men, Weapons and Tactics, Table Top Talk - Captain Sachs' Wargame, Last Minute Miscellanea, and Suggested Reading (other wargames periodicals). 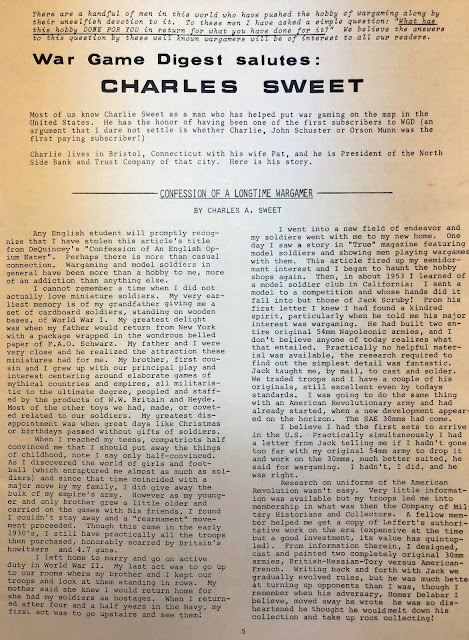 The final article was this one, written by Charlie Sweet. Indeed, the entire issue was dedicated to Charlie! 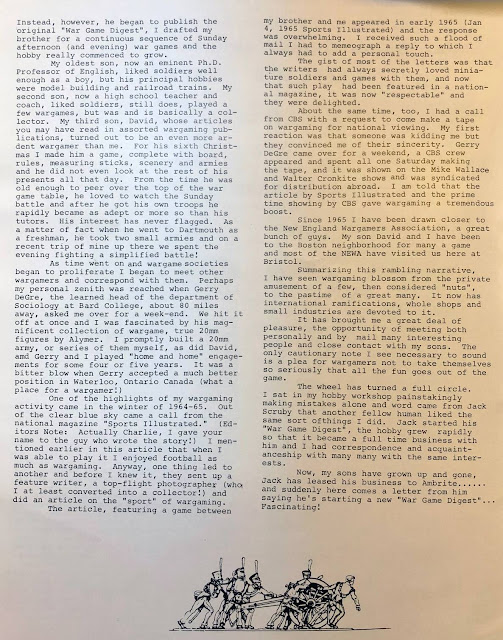 Little did I know at the time that in about2 years I would be meeting Charlie and playing in wargames at his house! As previously related, when I started at The University of Connecticut as a Freshman in 1973, that lead to meeting a UConn senior and fellow wargamer. Joe Fish. Joe was also from Bristol, CT; indeed Charlie's son, David, was a High School classmate of Joe's. Thus, through Joe, I met David, and then a group of us from UConn  were invited to several games at Charlie's home. Those games kindled my interest in wargaming with first Renaissance and then Ancient armies!
If there is interest in other articles from this magazine, I can probably post them as well.
Posted by Gonsalvo at 10:06 PM