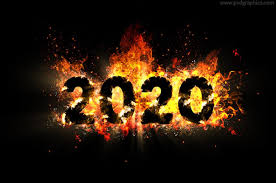 In the aggregate, I am sure this is how most of us feel about the year now concluded!
Well, it's time for an accounting of the most unusual year in memory! Personally, I was very glad NOT to be self employed, as many of my physician colleagues were severely effected by the  sharp drop off in patient visits from March through July. I was also fortunate that no one in our family has contracted the disease thus far, and none of my patients who have gotten it died (although several still have no sense of taste or small 6+ months later). There were 300,000+ in the US who were not so fortunate. My employer, Nuvance Health Network, like most health care organizations in the US, had a 150 million dollar budget loss as direct result of Pandemic effects. Not good! On the other hand we coped with the flood of Covid patients in the Spring better than most, and are weathering the storm so far this winter. Hopefully the month of January is not as bad with Covid-19 as we fear it will be!
All of our vacation plans were cancelled this year, becoming "stay-cations". Like many, the resultant savings were diverted into home improvements. Despite the huge global burden of illness and economic hardship, the explosion of Telemedicine ("virtual visits") was for the most part a plus. Most of us painted more figures than usual, with little else to do. Remote gaming allowed some of us to actually game more in 2020 than we have in a long time. 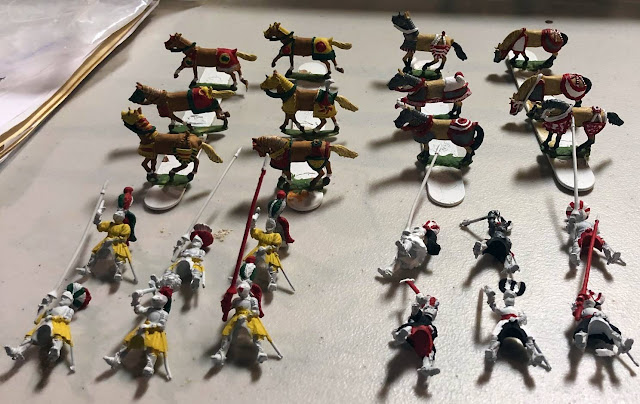 Essex Renaissance Gendarmes on the painting table.
Review of 2020 Painting Goals:
"I expect painting output may fall this year as well; still, I'd like to do at least 2000 points worth."  Goal markedly exceeded, a Covid-19 side effect!

1)  Once again, the lead for a large Macedonian Army I picked up several years ago is high on the list. Some progress was finally made on that front, but the bulk of the lead remains unpainted! Goal met, although some Macedonian/Thracian lead does remain.

2) Add to my French and Austrian Napoleonic armies (already my largest, mind you), in preparation for both the 1809 Campaign in a Day on the Danube (see below), and a 2021 or later return to the Battle of Wagram. Goal met.
3) Rebase the Chariot era troops from Bill McHugh's Collection to my system. Goal met.

4) Maybe some additional ECW reinforcements late in the year (needs the Old Glory Order)
Added 4 regiments of Foote; Goal met.
5) Paint the Murawski Polish Horse Artillery and Krakus. Of course, should they chose to do the Baden Hussars, those will rise to the top of the list! No progress... but Murawski just announced they are planing on doing the Baden Hussars!
6) Paint some of the backlog of Great Italian Wars troops (recurring unmet goal!). I have some of the exquisite Eureka Gendarmes assembled and primed, though! Goal not met, but there is a unit on the painting table nearing completion.

We are due to start a Warplan 5/5 based multiplayer game this year. My country is the Kingdom of Obajosa, based upon Napoleonic Spain, and using my Spanish army, Pandemic casualty thus far.
Run a Campaign in a Day at The Portal in Manchester, CT, again this spring, based upon the April, 1809 "Crisis on the Danube" .  Pandemic casualty; everything was set up, had to be cancelled a few weeks before the event. Maybe Fall 2021?
Run the same (doubtless with some changes) at Historicon in July; most likely that will be the last time I'll do a Campaign in a Day at Historicon, but you never know!  :-)
Historicon itself was a Pandemic casualty! Would not attempt in 2021, maybe 2022?

Probably run a Siege game using Vauban's Wars at Historicon. Pandemic casualty, maybe 2021.
The Historicon theme this year provides little inspiration for me for other games, aside from the outside possibility of a French Revolutionary Balloon Corps appearance; color that unlikely! That means one or more smaller  1809 games with Field of Battle 3rd edition are likely to be on the roster. One or more games with To the Strongest/For King and Parliament are likely. Pandemic casualty!
With the return to Lancaster, I might even run a Sunday morning game! Not in 2020, Bub!
Jared and I have discussed doing a version of the 1809 Campaign in a Day at his Game club this summer, possibly with different rules. Pandemic casualty, remotely possible for 2021.
I haven't decided yet whether to attend HAVOC in April this year and run a game there; I find the drive there and back to be long, and would probably be better served just doing a game at home. On the other hand, a game from Lord Kalvan of Otherwhen is a possibility.
HAVOC was another Pandemic Casualty.
Commentary:
Like everyone else, games this year were pretty much solo or remote, or little at all. Tyhe list of unmet goals due to the Pandemic is of course long. Still, the total was impressive- averaging a game every 2 weeks. That is the most games I have played in a year since High School. Remote games certainly aren't ideal, but they do allow us to play with opponents 1,000 or more miles away, and you can't beat the driving times! Gaming certainly looks to be limited to solo and remote through the first half of 2021, aside from perhaps some outside gaming by late Spring. Each of my two attempts at hosting remote games encountered issues, but each time the issues were solved after the fact, positioning things better for the next outing.
Blogging:
There were 107 posts in 2020, an all time high. For what little it is worth in the bot era, cumulative page views have now exceed 1.3 Million.
Review of 2020 Blogging Goals: Maintain about the same number of Blog posts - circa 80 - 100 per year. Goal exceeded.

Rules:A quite active year - assisted with some proofreading of FoB3, playtesting Vauban's Wars (which was released in q$ 2020, and really needs a post of its own), many Zoom play test games for Wars of the Roses "Test of Resolve". New rules tried - Galleys and Galleons for my 15 mm Renaissance Galleys, FoB3-ECW, Neil Thomas OHW (Napoleonic), Morschauser-based Horse and Musket rules.
Review of 2020 Rules Goals:  I have a lot of sets that I want to try out, and did none of that last year (see last years planning post!); maybe 2020 will be the year! Goal met... but even more rules I want to try out still!
Happy New Year, all, and a not so fond farewell to 2020!