Results for the Snappy Nappy 2022 Pre-Game Reconnaissance Turns, Part 2 of 4.

This post includes the mechanical results for each Turn 2 movement  point and the corresponding story piece results with the latter being titled in blue for what the French received, in green for what the Russians received, and in red for what both sides received.
Also, their are associated maps, and these have been coded with colored arrows, 2 Blues and Purple for the French with Red for their spy, 2 Greens and Yellow for the Russians with Orange for their spy.  The following is a list of the units with their corresponding colors on the maps.
For the French ...
Castex's Chasseurs ... Dark Blue
Corbineaux's Chasseurs ... Medium Blue
Doumerc's/Oudinot's Light Cavalry ... Purple
The French Spy ... Red
For the Russians ...
Kulnieff's Hussars ... Medium Green
Balk's Dragoons ... Light Green
Wittgenstein's Light Cavalry ... Yellow
The Russian Spy ... Orange
- - - - - - - - - - - -
PRE-GAME RECON, TURN TWO
Movement Point 1 ...
French ...
1.  Castex's Chasseur Scouts in Golovichitsa move to Sokolitchi, without incident
2.  Corbineau's Chasseur Scouts in Disna attempt to move to Danowiczy except they bounce back to Disna after meeting Russian light cavalry coming from Lozovka.
3.  Dourmerc's/Oudinot's Light Cav in Dvoretz move to Biloe without incident.
4.  The Spy in Baravucha makes it to Lozovka without other incident, although does find the Russian Light Cavalry that got bumped back to that location.
Russian ...
1.  Kulnieff's Hussars from Antonova to Danowiczy arrive without incident.
2.  Balk's Dragoon Scouts from Drissa to Pokajewsky arrive without incident, but Repnin's cavalry offer up a toast to their travels.
3.  Wittgenstein's Light Cav Scouts from Lozovka to Baravucha and after encountering French 20th Chasseurs, they bounce back to Lozovka.
4.  Spy moves from Drissa to Bezdedlovitchi, and arrives without incident. 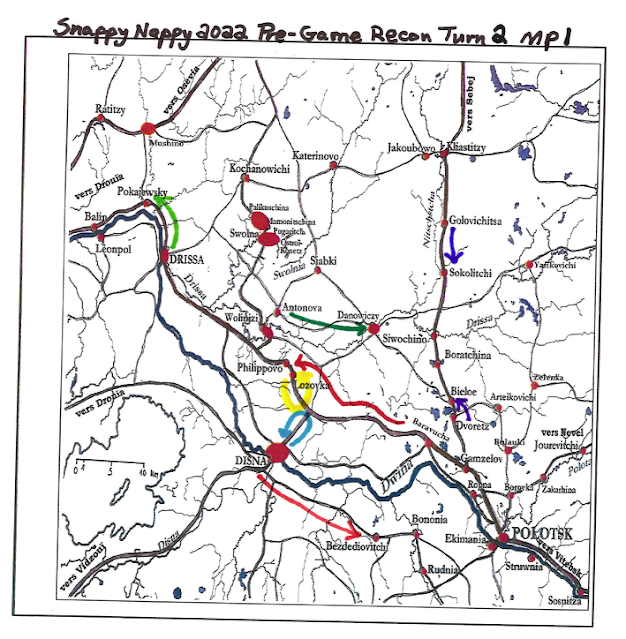 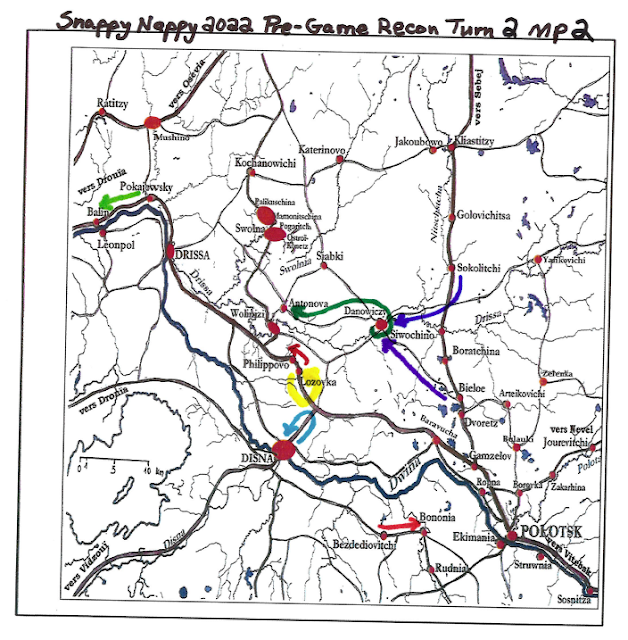