Results for the Snappy Nappy 2022 Pre-Game Reconnaissance Turns, Part 4 of 4.

This post includes the mechanical results for each Turn 4 movement  point and the corresponding story piece results with the latter being titled in blue for what the French received, in green for what the Russians received, and in red for what both sides received.
Also, their are associated maps, and these have been coded with colored arrows, 2 Blues and Purple for the French with Red for their spy, 2 Greens and Yellow for the Russians with Orange for their spy.  The following is a list of the units with their corresponding colors on the maps.
For the French ...
Castex's Chasseurs ... Dark Blue
Corbineaux's Chasseurs ... Medium Blue
Doumerc's/Oudinot's Light Cavalry ... Purple
The French Spy ... Red
For the Russians ...
Kulnieff's Hussars ... Medium Green
Balk's Dragoons ... Light Green
Wittgenstein's Light Cavalry ... Yellow
The Russian Spy ... Orange
- - - - - -
PRE-GAME RECON, TURN FOUR
Movement Point 1 ...
French ...
1.  Castex's Chasseur Scouts in Kochanowichi move to Mushino without incident.
2.  Corbineau's Chasseur Scouts in Disna move to Leonpoul via the the South bank of the Dwina river looking for bridging attempts, find no bridging attempt, as well as a ford at Leonpol that can be passed by cavalry, although infantry and artillery wouldn't be able to cross there.
3.  Doumerc's/Oudinot's Light Cav scouts in Kochanowichi move to Palikusechina-Mumonitschina, and are bounced back to Kochanowichi where they encounter Balk's Dragoon Scouts, a skirmish occurs, 2 dice are rolled for each side's killed and wounded, resulting in the French holding the village.
4.  Spy moves from Drissa to Swolna, finds infantry, cavalry and artillery.
Russian ...
1.  Kulnieffs Hussar Scouts move from Danowiczy to Bieloe without incident.
2.   Balk's Dragoon Scouts move from Drissa to Kochanowichi, and are bounced back after encountering French Light Cavalry scouts, and skirmish occurs with 2 dice rolled for each side's killed and wounded, resulting in the French holding the village.
3.  Wittgenstein's Light Cav Scouts move from Danowiczy to Bieloe without incident.
4.  Spy from Ropna to Gamzelov without incident. 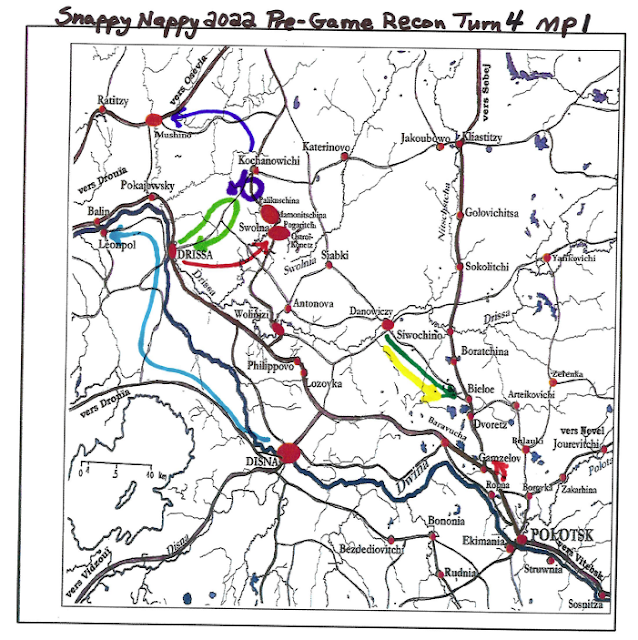 - - - - - -
Story Piece Results ...
Spys At Swolna ...
The three men on horseback reached the T intersection, and took the path that would allow them to get to Swolna.  As they proceeded beyond the connection of those two roads, the light cavalryman who trailed behind Doumerc's Aide De Camp with the anti-Czarist Russian guide out in front of both, heard noise behind them.
As the light cavalry man looked over his shoulder, he let the two ahead of him know of the sounds he heard, and it didn't take the guide long to get them off the trail to one side, and out of sight as best as possible.  Shortly afterwards Russian dragoons were seen coming from Drissa and heading in the direction of the village of Kochanowichi.
Having successfully stayed out of sight, the team of three continued on their journey.  When they arrived at a good distance from the bridge that crossed the Swolna River and into the village there, this time it was the guide who noticed the next group of Russians, and these were infantry guarding the crossing point and spread out along the edge of the river.
It didn't take the Aide De Camp long to motion the group for backing up.  Then after using the same disposition the three had used in the woods at Drissa, out came the Aide De Camp's spy glass, and he was able to locate blue coated Hussars, along with additional cavalry and infantry located in the village of Swolna itself.
However, with very little cover in the area, they decided not to push their luck, and retreated further back down the road from which they came.
The Spy, and the Scouts ...
Filip rode Apostol out to the main road that went between Polotsk and all the way north to Drissa.  As he proceeded north to Gamzelov he couldn't help but notice the amount of foot prints, horse hooves, and even artillery wheel ruts that led north.
When he reached the village of Gamzelov, where the main road leading north and eventually all the way to St. Petersburg was located, it didn't take him long to see that there was almost no traffic going in the direction of Drissa.  Instead, the road traffic that had come before him, and that he'd been observing along the way, it seemed to all pass off and along the road that branched off to the north.
Filip's original plan was to head for Baravucha, but now he wasn't so sure that such was the way to go to find more of the enemy.  Filip pulled out a bit of food for himself and Apostol before finalizing his choice.
Little did he know, but even the Wittgenstein's Light Cavalry scouts, and those from the Grodno Hussars, were also encountering the same kind of tracks heading north as they arrived in Bieloe to rest their horses while they all had their lunch as well.
From "The North Flank of The Russian Campaign in 1812",  by I.B. Storey ...
"Late in the morning, the French cavalry scouts reached Drissa on the south bank of the Dwina to find the bridge that had been burned earlier in July had not been replaced.  And for the moment, there didn't seem to be any Russian activity in the town.  At the same time, from both French and Russian reports, both sides noticed each other, with the French cavalry continuing on toward their goal in the north, and the Russians positioned south of the town being spotted with all the various military branches represented, and closely situated in their encampment.
Meanwhile, French light cavalry scouts descended into Palikuschina, and it wasn't long before a group of Cossacks were encountered near Mamonitschina, yet being backed up with some Russian infantry, the French returned to Kochanowichi accordingly.  However, as the light cavalry arrived, they found that scouts from Balk's dragoons were coming in from the direction of Drissa, and it appears that a sharp skirmish occurred, for both sides reported casualties in their reports on the fighting that occurred within the streets of the village.  The Russians had 6 killed and 4 wounded, the French had 2 killed and 5 wounded, and this brought the retreat of the Russian dragoons back to Drissa."
- - - - - -
Pre-Game Turn 4, Movement Point 2 ...
French ...
1.  Castex's Chasseur Scouts in Mushino to Kochanowichi, and arrive without incident, except to back up the Doumerc's/Oudinot's light cavalry that return here.
2.  Corbineau's Chasseur Scouts stay at Leonpoul establishing a screening position at the ford, and without incident.
3.  Doumerc's/Oudinot's Light Cav Scouts in Kochanowichi move to Disna, fight a skirmish with Balk's dragoon scouts, are bumped back, and reinforced by Castex's scouts.
4.  Spy moves from Swolna to Wolinizi, and arrive without incident.
Russian ...
1.  Kulnieff's Hussar Scouts from Bielow to Boratchina, encountering an infantry and artillery encampment before going back to Bielow.
2.  Balk's Dragoon Scouts to Kochanowichi, encounter scouts form the 23rd Chasseurs, and are bumped back to Drissa.
3.  Wittgenstein's Light Cav Scouts from Bieloe to Boratchina encountering an infantry and artillery encampment before going back to Bielow.
4.  Spy moves from Gamzelov to Baravucha arrives without incident. 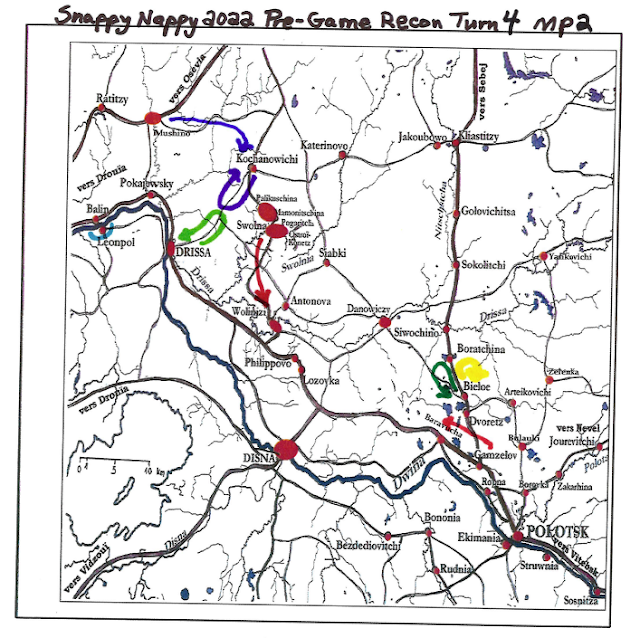