Napoleon's Imperial Guard was of course the direct descendant of the Consular Guard, which was established only 18 days after the coup d' etat of 18 Brumaire (November 10, 1799)  which resulted in General. Bonaparte ultimately becoming 1st Consul (December 24, 1799); it was regularized by decree on January 3, 1800. The cavalry complement of the initial formation of the Garde Consulaire was 2 squadrons of  "light cavalry", and a company of Chasseurs a Cheval. The Chassuers a Cheval were themselves descended from the Guides of the Army of Italy (later, the Guides of the Army of Egypt).

The Chasseurs a Cheval were increased to full squadron Jan 13, 1800, then 2 squadrons August 6th, 1801, and 4 squadrons October 1, 1802. They officially became the Chasseurs a Cheval of the Imperial Guard on May  18, 1804. The regiment continued to grow, adding velite companies and later Young Guard companies to reach 8 squadrons by 1813. Probably the most famous regiment of the Imperial Guard cavalry, it ordinarily supplied the personal escort for the Emperor and his immediate entourage. Napoleon's often depicted green coat was the undress uniform of a Colonel of the regiment. 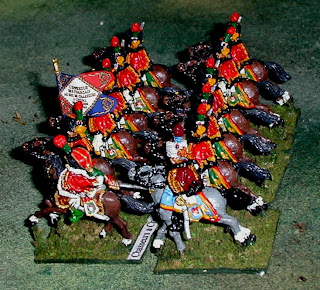 Here is the famous regiment of Chasseurs a Cheval of the Guard in full dress uniform. Note the white fur trim to the officer's pelisse, his leopardskin shabraque, and the green leather boots.Being an officer in the Guard was an expensive proposition! 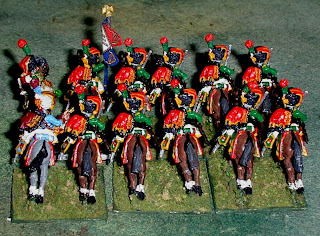 Rear view of the Chasseurs a Cheval de la Garde Imperiale. Note the trumpeter, mounted on a grey horse (the troopers were all supposed to be mounted on dark bays). The trumpeter, instead of reversed  colors, wears a sky blue dolman dark red/maroon pelisse, a white colpack with a dark red over sky blue plume; the trumpeter's lace and cords are all red mixed with yellow. 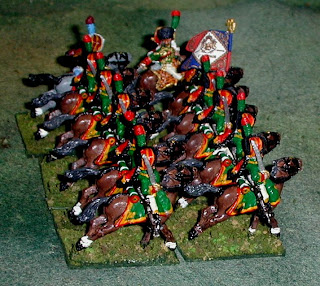 This side view shows the shabraque better (dark green, edged with aurore, with a red border) as well as the red trimmed aurore bag or flamme of the Chasseur's fur colpacks. 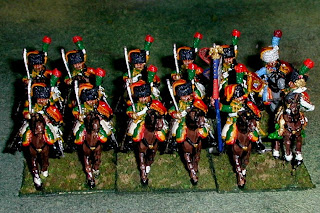 A frontal view of this elite regiment. Note the sumptuous trumpet banner; figures are Foundry, flag by GMB.
In 1799, General Kleber, left behind in Egypt by Bonaparte, formed a company of Syrian Janissaries to which were later added Mamelukes; they later became the Mamelukes of the Republic in July, 1800. A Squadron was ordered added to the Consular Guard in 1801, later reduced to a company, and attached to the Chasseurs a Cheval. The officers were French, and over time, more and more of the troopers were as well. The fashion conscious Parisians loved their exotic costume, and along with the passion for Egyptian themes spurred by collections and writings of the savants returning from Egypt, costumes inspired by the Mamelukes became the rage among the women of the capitol. 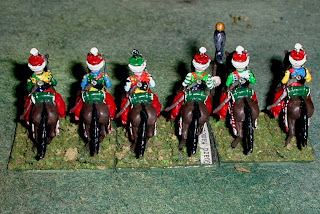 Here's the small unit of Mamelukes that form part of my guard cavalry. The specifications for their uniforms were much looser than for standard European cavalry. Originally, the "cahouk" or cap that the turban is wrapped around was supposed to be green, "the color of the prophet", but by 1805 and later it was most commonly bright red or crimson. 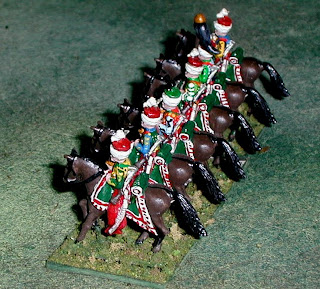 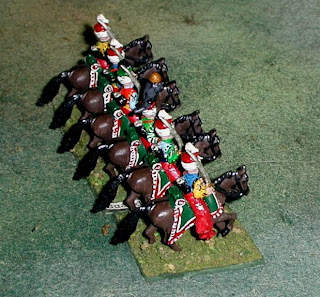 The baggy pants were invariably either red or amaranth. Note the color and design of the saddle blankets; these were fringed, rather reminiscent of an oriental rug. 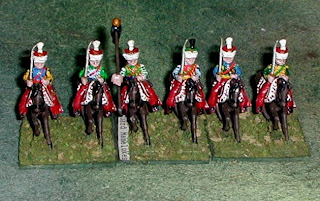 In addition to a standard, the Mamelukes had four troopers bearing horse tail queues, two black, one red , and one yellow. The figures are Minifigs.
The  "2 Squadrons of Light Cavalry" established at the formation of the Consular Guard in 1799 were swiftly transformed into the Grenadiers a Cheval de la Garde des Consuls in December, 1800, and then the Grenadiers a Cheval de la Garde Imperiale in May 1804, at which time the regiment had 4 squadrons and a strength of a little over 1,000 men of all ranks. At various times squadrons of velites and later Young Guard squadrons were added, but the regiment never had more than 6 squadrons total
. 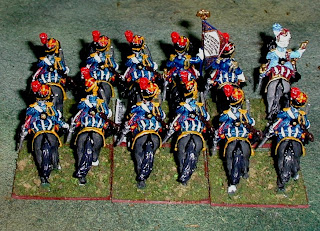 We start with a rear view of the Grenadiers a Cheval; this shows the red patch on the back of the bearskin headdress, which bears an aurore cross, as well as the cords of the aiguillette, worn on the right shoulder, in common with all of the remaining French Guard Cavalry regiments. 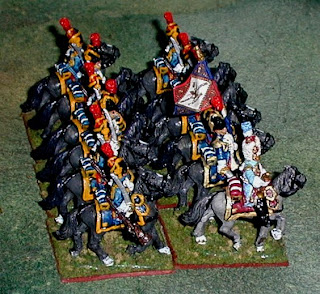 This side view nicely displays the uniform of the trumpeter, resplendent in sky blue jacket faced crimson, white bearskin with gold mixed with crimson cords and sky blue over white plume; note also the saddle blanket in crimson trimmed with gold, and the officer, whose uniform has gold items where those of the troopers were aurore.Their standard had a somewhat unique design (flag by GMB once again). 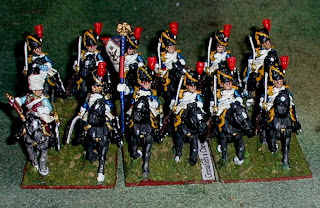 A head on view of the Grenadiers a Cheval of the Guard; the trumpeters aside, all the men were mounted on black horses. NCO's (not shown) had the cords on the bearskin, sword knot, trefoil epaulette and the aiguillette all with mixed scarlet (2/3) and gold (1/3), similar to their foot guard equivalents.

I painted all of these units more than 10 years ago, and my painting has improved considerably since then. A few months ago, I applied Magic Wash to these figures, and it really improved them a lot, nicely picking out the detail in the cords and especially the white bearskin and colpack of the trumpeters. The Grenadiers a Cheval also have black lining of the saddle blankets, which was done when they were originally painted. Together, they are much closer to doing justice to these very fine figures.
Part 2 will cover the later additions to the Cavalry of  the Imperial Guard, including the various Lancer regiments, as well a a few odds and ends in passing. Until then... shout "Vive l'Empereur!"
Peter
Posted by Gonsalvo at 1:04 AM