This game was run on Saturday afternoon; the scenario and playtest were previously posted. Walter, Jamie, and Gabriel played on the French side of the "Traffic Jam" as Gabriel so aptly put it, while Tim was one of the Russian players; Dave and Michelle later took some of the Reserve commands, if I recall correctly. There was one error in the deployment that effected the game; the Russian Reserve Artillery shouldn't have entered until late in the game (the 5th Russian MOVE card, I think), but instead started on the table in March column at the start of the game! 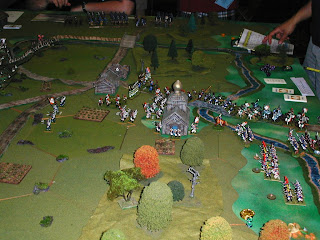 The French start with just a single Division over the sole bridge and deployed in the village of Maloyaroslavets; The river is class III (hardest to cross at baseline) but only for Infantry, and even then the units have to roll for failed crossing and Unit Integrity losses due to hypothermia, and are all Out of Command when they finally do reach the far bank. In addition, the bulk of the table is Class II rough terrain for Movement only, reducing the rate of advance by 50% for all units not moving on a road. 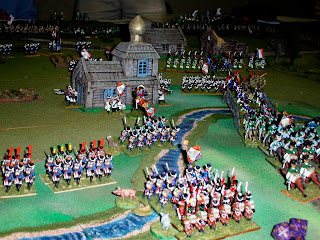 The French get lucky and turn a LOT of MOVE cards early on; note the laggard French line unit stuck in the stream with the pig (Out of Command) and the rock (one UI lost) from a failed attempt to cross this MOVE. 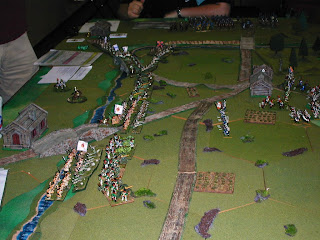 The Russian forces, by contrast pulled very few MOVE cards all game; however, their artillery was unlimbered, and what they *did* turn instead was a ton of ARTILLERY FIREPOWER cards; especially with the addition of the Reserve batteries, the Russians really pounded the French units as they each crested the ridge and showed their face, so things were actually working pretty well for them despite their relative immobility! 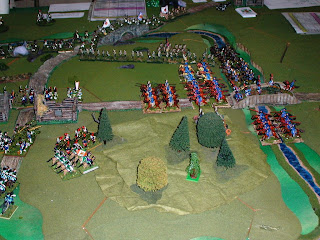 A horde of Cossacks cross the stream, at the bridge and otherwise (the stream was merely class II, a minor obstacle only), threatening the French right flank. 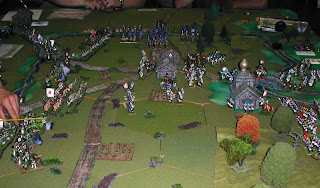 The French pour reinforcements into the battle quite rapidly with all of the MOVE cards they turned, but the terrain is still making their advance very slow... This was about the forward point that the French got all games; now some fresh Russians are starting to arrive as well, including... still more Russian artillery! The French have little success in expanding their bridgehead beyond the village, and especially are finding it hard to deploy their own Artillery units! 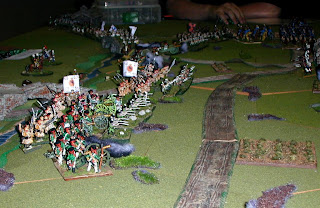 The Russian Infantry advances to engagement range on their left, but seems content to just support their Artillery in their right. 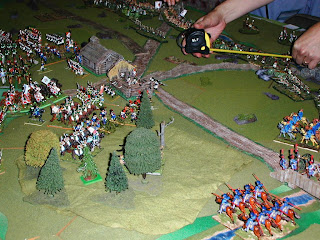 Walter has set up a defensive line in the woods on the French right flank. 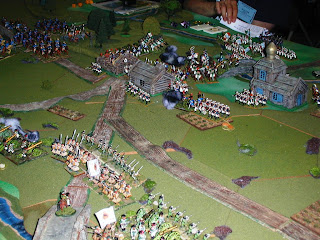 Overview of the battle at this point, the French have sole control of Maloyaroslavets itself, but can do little else except bring on more reserves! 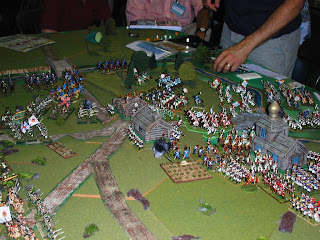 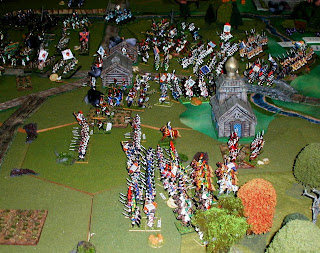 The view of the Battlefield from the French left flank; almost all of their forces are finally deployed, but still very crowded. The pounding inflicted bu the Russian artillery means French Morale Points have dwindled rapidly! 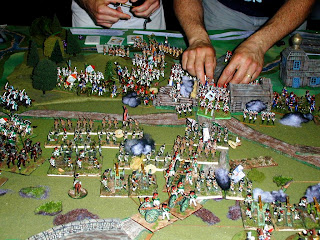 The Russians launch their first assault on the village, as still *more* of their artillery comes on!! 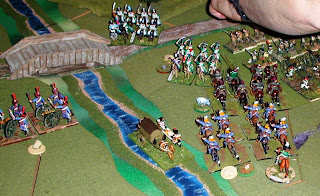 Walter's Italian Cavalry defeats several units of Cossacks; Dave M has assumed their command, and on the next ARMY MORALE card rolls a D20 for officer survival... and rolls a "1". A field ambulance is seen picking up the wounded general, and all of his troops become Out of Command!
It is too little, too late, and the French Army reaches zero Army Morale. With little prospect of overcoming the huge deficit in Morale points, the French concede, dooming the army to the Northern route over lands already picked clean, and the bitter cold of the Russian winter to come...
Peter
Posted by Gonsalvo at 5:03 PM