Since this post is sort of a potpourri, I thought it might also be a good place for a few observations about my own Historicon 2012 experience, games aside. Joe arrived on time at my home on time, and along with making some last minute phone calls related to my medical practice, we departed form Western Connecticut at about 8:45 AM. As planned, that meant we missed the rush hour traffic on the Tapan Zee Bridge; we had a very smooth drive straight down, encountering minor delays of a bout 5 minutes each time in the Baltimore/D.C. area, still, we avoided the rush hour traffic and arrived at our hotel just after 3PM; can't complain about that, and I wasn't pushing the speed by any means. Joe and I talked almost non stop about gaming, some new rules for the Napoleonic "Imaginations" Napoleonic campaign we're doing using Warplan 5/5, our upcoming games, and just about everything else; really made the time fly by. We stayed in the Country Inns and Suites by Carlson in Fredericksburg, just one exit North of the Convention Center on I-95. Our room wasn't ready, and we hadn't eaten for the whole long trip down, so we headed out for a late fast food lunch. By the time we finished that and a brief exploration of the immediate area we were in (lost of chain stores and restaurants, nothing much else), our room was  almost ready; we had a suite that we were sharing with Tim C., arriving from England. In a miracle of transatlantic precision planning (i.e., luck), he arrived a few minutes after we did. After unpacking, settling in, and chatting for a bit, we headed over to scope out the Convention center and pick up our pre-reg badges; there we were given some inside tips for GM's about parking and loading/unloading for game set ups, and met Barry. After that, we had a comfortable and very satisfactory sit down dinner at the outback Steakhouse in the huge shopping complex that abuts the Convention Center; after the long drive, I enjoyed a flight of Margaritas (I must have been thinking about Eric's Puebla game scheduled for the following day, LOL).

The convention center is modern, and the vast majority of the games were in the cavernous main Hall - space for a great many games there. The dealers area was immediate adjacent, with the Flea Market ("Wally's Basement") in the rear of the dealer's area, behind the food concession tables. There seemed to be more than adequate space for everything. Some games were in a set of 5-6 smaller rooms on the other side of the main hall... a very short walk to/from anything on the site. I spent several hours perusing the dealer's area, but was tempted by very little; in fairness, I had come without any major purchases in mind, as I need to do some work figuring out exactly what I need for my next project(s). I'm a pretty disciplined shopper, and as almost all of my purchases are Historical in nature, most often I have the companies bring my order to the con, or make note of items for consideration next year. Still, I spent a record low in the Dealer area for me - under $10! I will, however, be making up for that with a significant mail order within the next month or so.

As many have noted, the area immediately adjacent to the center has a plethora of dining options, including just about every chain restaurant that you ever heard of, and quite a few you didn't (maybe some you didn't want to know about. either, like the "Bailey's" Barry, Joe, Tim, Dave, Michelle, Gabriel, Greg and I ate at Saturday night. Food was fine, just weird atmosphere, LOL! The food at the convention center was certainly acceptable; nothing more or less than you'd expect - not up to the standard of the Host in the last few years before the move, but certainly acceptable. Bathrooms have been discussed ad nauseum; could certainly be better but not much different than the other sites, and not exactly the reason I go to Historicon, LOL! The noise level in the main gaming hall, though really got to be an issue, especially Friday night. I've been doing this for the last 10 years or more, so I'm used to noise, but this really was LOUD - Barry, Joe and I ALL had ringing in the ears by the end of that night. That is the one thing that really needs to be addressed in some fashion for next year. The tables supplied were great, the chairs... substandard is the best word for it; an upgrade there for next year would be welcome. There were plenty of games across a wide spectrum, including some stunning ones (the big Crimean War table comes most readily to kind in that regard), and everyone seemed to be enjoying themselves. I had a few  generic but generous glasses of wine for $5 from the bar there, and some pretty good and equally generous Whiskey Sours for $6.50, so no complaints there. Overall, despite the longer drive distance, I would (and will) happily return again next year!

In reverse chronological order, here are some of the other Piquet/Field of Battle family games that were run at Historicon this year; I can't comment too much on these as I was busy running or setting up my own games.

On Friday night, near the big Borodino game, a handsome transcontinental effort was put on by Freddie A. and Jeff G. from California, using Rob C's figures from upstate NY! The action is East Afrika, the time - World War One: 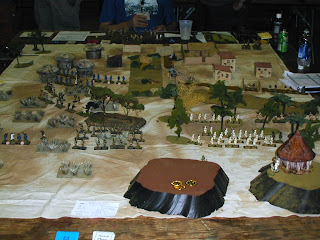 Very effective, evocative terrain. Rules used were Piquet: Barrage!, with some elements of Din of Battle, 2nd edition thrown in, I believe. 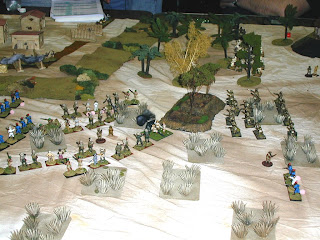 Just the thing to go with the handsome armies!  I'd love to see this one again, too! I know Adolfo was one of the players along with Ian B, Tim C., and others; anyone care to chime in with some comments  about the action? There are a few more (and better)  pics and a promise of a write up on Adolfo's blog. 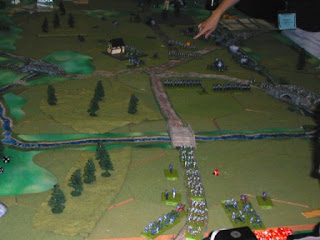 The following are some pics of a hypothetical Franco-Prussian  battle fought as a pick up game on Saturday night. This used a stripped down version of the terrain from my Maloyaroslavets game (report forthcoming), and run by Tim C. using his 15mm troops and Field of battle, 2nd edition. 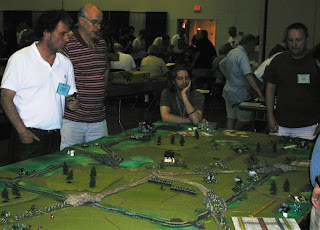 Greg K, Tim C, Gabriel and Dave M, all looking a bit tired after three very full days of gaming as they survey the field. 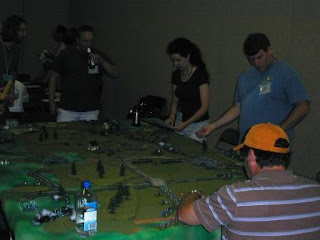 Dave M (caught in a typical pose, LOL), Michele, Eric, and Hal were also in on the action. I can't say too much more as I was pooped from running my earlier game, and spent the time shooting the breeze with Adolfo, Joe, and others. 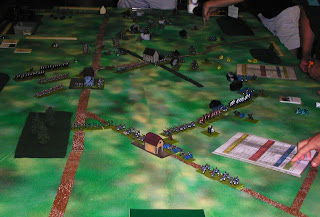 The next two of photos a re random shots I took of Tim's formal Franco-Prussian War game, Mars la Tour, fought on August 16, 1870. 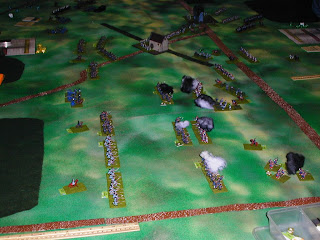 An exchange of firepower!
Once again, I'd welcome additional information and/or photos about Tim's game. 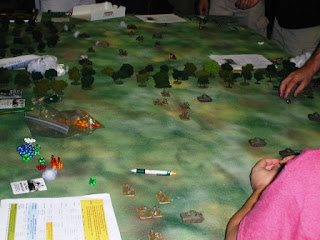 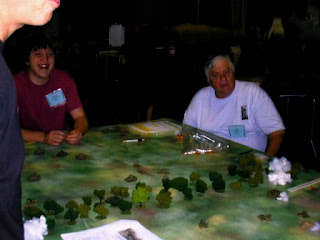 Now Piquet/Field of Battle veterans, Alex and son Thomas were among the participants. I didn't have much chance to talk to you guys this time out. I had meant to buy Thomas a beer/drink in honor of his 21st birthday which fell just prior to the convention - hit me up for it next year, Thomas! 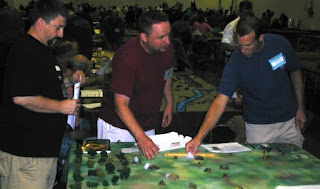 Dave M explains the finer points of the rules as Steve looks on.
It was great to have so many fellows running and playing Piquet/Field of Battle games at Historicon this year!  I missed getting any pics of the 25mm Anchor of Faith Cropredy Bridge ECW game the Canadian guys (Peter Friesen and friend) were running, but did get to talk to them briefly while they were setting up. As always, the best part of going to this great convention is meeting, chatting, and playing with friends old and new! Thanks to HMGS and its officers, the convention staff, and the staff at the Fredericksburg Exposition center for a great time, and a convention that ran very smoothly, especially for a new site in a new state. Most folks are quick to complain, but slow to give praise where it is due, and even slower to volunteer their own time. So, once again, congratulations and a big tip of the chapeau for a job well done. See you next year in Fredericksburg!
Phew; just one last Historicon post to go, covering the Battle of Maloyaroslavets on Saturday afternoon.
Peter
Posted by Gonsalvo at 11:35 AM