The first unit of Guard cavalry formed without antecedents dating back to at least the Consulate was the Empress' Dragoons, formed by decree in April, 1806, with the troopers drawn from each of the line Dragoon regiments on the recommendation of their colonels. The regiment initially had 2 very large squadrons plus one of velites; 2 more squadrons were added after the Battle of Friedland in 1807. 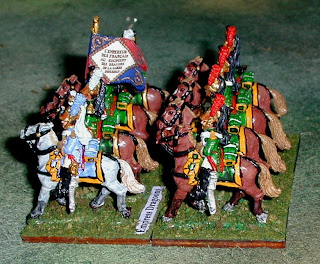 This side view shows the attractive uniforms of the regiment, officially renamed the Regiment des Dragons de L'Imperatrice, and presented by Napoleon to his wife, Josephine, in 1807. The men of the regiment formed a deep attachment to the Empress and her cause, and were very distraught, as were many in the Army, over the Imperial divorce in 1810. Josephine was allowed to retain the title of "Empress" even after the divorce, and I have little doubt that the Dragoons continued to see themselves as "her" regiment, rather than that of her replacement, the former Hapsburg princess, Marie-Louise! 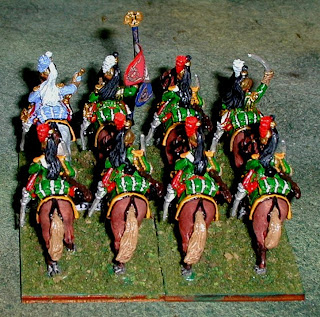 A rear view of the regiment; which wore a somewhat more elaborate version of the helmet worn by their line counterparts, adorned with an imitation leopard skin fur turban. Chestnut mounts were used for this regiment whenever possible, aside from the trumpeters, who were mounted on grey or white horses as usual. 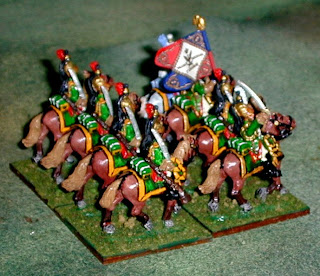 A side view showing the regiment's standard (by GMB designs once again), and the officer's substitution of gold for all the aurore items of the troopers (aiguillette and saddle blanket edging, mostly). 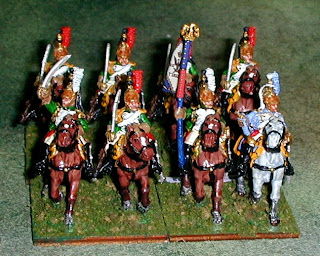 This frontal view shows that the full dress habit coat was very similar to that of the Grenadiers a Cheval, aside from substituting dark green for the dark blue of the Grenadiers. These are Foundy figures once again; one of their best, in my opinion. I painted this unit about 4 years ago, using staining techniques and some black lining, and was very happy with the result; thus no Magic Wash seemed necessary, so I spared this unit the indignity! 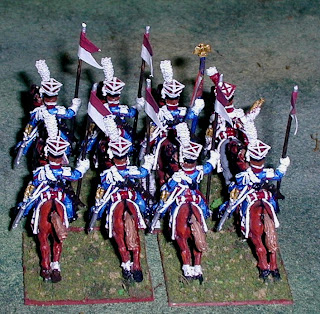 A rear view of the Polish Lancers of the Guard; note the crimson portemanteau and the blackened wood of the lances; the lance pennons were always crimson over white. 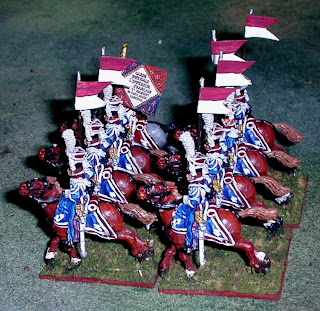 This side view shows many details of what I think is arguably the most elegant uniform of the entire Napoleonic Wars; the blue is considerably darker than it appears in the pictures. Once again, an application of Magic Wash to these figures, which I originally painted more than a decade ago, really brought out the details, especially on the white cords and plumes. 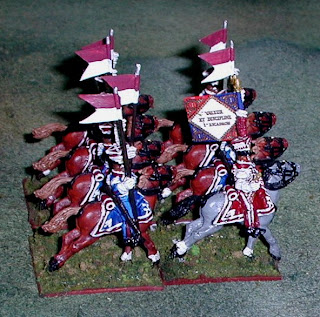 The opposite side view shows the uniform of the trumpeter well; a white jacket with crimson facings, crimson pants with white stripes, and the top of the czapska white with crimson cords, and a white over crimson plume, as contrasted to the troopers who have crimson tops to their czapskas, with white cords and plumes. 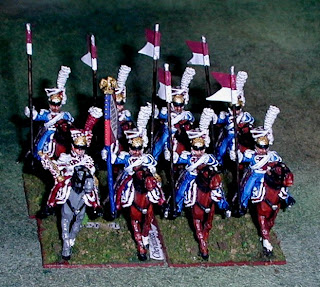 The frontal view shows additional details; the aiguillette was moved from the left shoulder to the right when the lance was adopted. These are Foundry figures with a GMB flag once again. The short lived 3rd Chevau-Leger Lanciers (Polish/Lithuanian) regiment evidently wore an identical uniform to the first, except with yellow lace/piping and yellow metal buttons in place of the white ones of the 1st regiment.

The next unit to join the Cavalry of the Guard came by a rather circuitous route; the Grand Duchy  of Cleves-Berg was bestowed upon Marshal Murat in 1806; inn 1807, Murat ordered the formation  of a cavalry unit, the Hussars of the Grand Duke of Berg. Having three squadrons plus an elite company of Garde du Corps, the unit underwent a further series of name changes including Regiment du Grand-Duc de Cleves, Chevau-Legers de la Grand Duchesse, and then Regiment de Chevau-Legers du Grand Duc de Berg. In 1808, a fourth squadron was added, and the first squadron entered the Imperial Guard. Two squadrons of the regiment were transferred to the newly formed Chassers a Cheval du Grand Duc de Berg. In January 1809, the Chevau-Leger regiment was disbanded, and the men sent to the Chasseurs a Cheval of Berg and the Guard Cavalry regiments. The unit adopted the lance in late 1809, and joined the Imperial Guard in December, 1809. In March of 1812, a second regiment was raised; both regiments were disbanded at the end of 1813, when their territory was over run by the allies and the Confederation of the Rhine dissolved.

The evolution of the uniforms of this unit was equally complex, but it always featured facings in amarante ( a light purplish pink hue), Murat's favorite color. This is nicely detailed on the Histofig site, including 2 plates illustrating the various changes. Suffice it to say that the original unit wore white (cream for the elite company), with amaranth facings and pants, but the uniform changed to a dark green jacket and pants with amaranth distinctions when it was transformed into Chasseurs a Cheval, and when the lance was adopted, a czapska with an amaranth top (and amaranth over white lance pennons) was adopted. The Lancers of Berg spent most of their existence fighting in Spain, but the second regiment participated in the 1812 invasion of Russia, and both regiments fought in Germany in 1813.

With the dissolution of the Kingdom of Holland in 1810, and the incorporation of its territories into metropolitan France, the former Dutch Royal Guard Hussars became the 2eme Regiment de Chevau-Lager Lanciers de la Garde Imperiale in September, 1810. The regiment had 4 squadrons at its creation, with a 5th squadron added in 1812. In January, 1813, the regiment was increased to 8 squadrons, and then 10 squadrons in March of that year; at that point the first five squadrons were designated as Old Guard, and the second five as Young Guard. 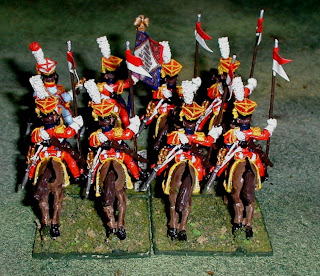 A rear view of the 2nd Light Horse Lancers of the Guard, often referred to as the "Dutch" or "Red" Lancers.; note the czapska of the trumpeter on the left; white top with scarlet piping and cords. Foundry figures. 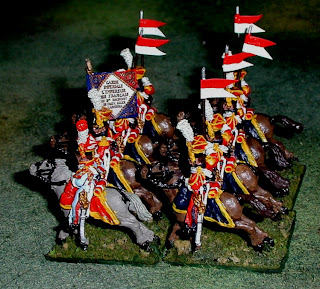 A lateral view of the regiment shows the light blue jacket and pants (faced red) of the trumpeter, adorned with  mixed red and yellow cords, aiguillette, etc.  Standard once again is by GMB designs; Foundry figures. 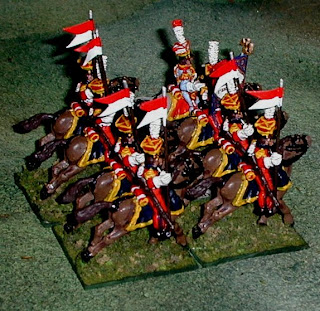 A view from the other side highlights the contrast between the dark blue saddle blankets with yellow edging, and the red uniform faced dark blue. This unit has also benefited from delayed application of the Magic Wash. ** 8/1/14:  Deadhead on TMP kindly pointed out that the lance pennons for the Red Lancers should be white over scarlet, the opposite of that pictured above. I'm not sure why thaty is, buit I checked several sources and he is inded correct. 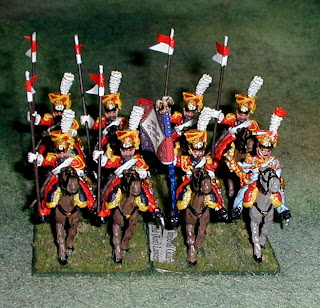 The head on view captures the full splendor of this magnificently attired unit; the "sunburst" brass plaque on the front of the czapska has a white center with a brass "N" in the center.

A relatively obscure unit of the Imperial Guard were the Lithuanian Tartars of the Guard, raised in July 1812. Although a regiment was planned, only a single squadron was ever raised. There is a decent brief (if nationalistic) history and illustrations here. The remaining men were absorbed into the 3rd Scout Lancers of the Guard in 1813 (see below).

Faced with the desperate need to rebuild his cavalry after the debacle of the Russian invasion, and yet severely short of both horses and funds, in 1813 Napoleon ordered the formation of four regiments of Gardes d"Honneur. These were to be raised from the sons of noblemen and the wealthy, and were to equip and mount themselves at their own expense; in return they would receive Guard pay and guaranteed promotion to 2nd Lieutenant after a year's service. "In the Guard, but not of the Guard", they were resented by the other guardsmen, and many were unwilling soldiers, deserting at the first opportunity, although they evidently fought well enough upon encountering the enemy. The Army reportedly nick-named them "The Hostages"! The four regiments wore an identical hussar style uniform, with a dark green dolman (faced scarlet) and pelisse (trimmed with black fur), and scarlet pants. The buttons, cords, and lace on the pelisse and dolman were white, as were the decorative knots on the front and the piping on the outer seam of the pants. The shako was scarlet with white upper and lower bands, cords and tassels, and white metal chin scales. The sole distinction between the four regiments was their plumes; all were dark green on the bottom, with the color of the tip varying by regiment: red for the 1st, blue for the 2nd, yellow for the 3rd, and white for the 4th regiment. Trumpeter's dress was uncertain; reversed colors, Imperial Livery, and also sky blue pelisses and dolmans (sky blue uniforms being common to most of the trumpeters of the Guard, see examples above) with scarlet pants and black fur colpacks all being possible - perhaps all three variations may have existed, especially with the men equipping themselves!

In late 1813, three regiments of Scout Lancers were added to the Guard, named the 1er, 2e, and 3e Regiments d’Eclaireurs de la Garde Imperiale. These were a deliberate attempt to counter the marauding Cossack hordes. The First regiment was attached to the Grenadiers a Cheval, the Second to the Empress Dragoons, and the the Third regiment to the 1st (Polish) lancers of the Guard. Each unit's uniform was quite different from the others.

On might also briefly mention the Gendarmerie d' Elite of the Guard, which had a mounted arm. The police of the Guard, these men seldom saw combat on the battlefield. This earned them the nickname of "The Immortals"! There uniform was reminiscent of that of the Grenadiers a Cheval.

This concludes our whirlwind tour of the Cavalry of Napoleon's Imperial Guard; see part 1 for the Chasseurs a Cheval, Grenadiers a Cheval, and Mamelukes of the Guard.

Peter
Posted by Gonsalvo at 1:34 AM