The siege of Badajoz was a key event in  Peninsular War, as Wellington was at last moving from the strategic defensive to the offense. It took place from  March 16 - April 6th, 1812. Wellington was eager to get the siege over with as quickly as possible, before any of the advancing French could intervene. Badajoz lies on the river Guadiana, on the frontier between Spain and Portugal.


Food Supply: As a "Well stocked" Fortress, Badajoz rolled 5 D6 and added 12, and wound up with 28
Supply Die:  D4 (higher is better; D4 is usual for Fortress)
Powder Supply: 10 (D6 plus 6)
Security Die: D8  (can vary from D6 [bad] to D10 [good]). Used to defend against Espionage and some other events.
Siege Morale Points (SMP): 16 (Low; John rolled... poorly!)
Popular Support Die: D6 (the Spanish populace was indifferent at best to the French Garrison). It probably should have been a D8 (Lot of discontent), maybe even D10 (openly hostile)).

With the Fortress having 4 bastions/24 points, the attackers will get  twice as many points to spend = 48): 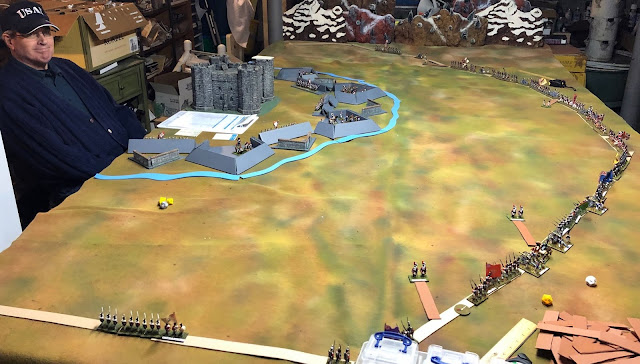 Early on in the game, British sappers start their saps from the 1st parallel towards the Fortress, as John/Philippon looks on confidently from behind the walls! The 1st parallel is at long range from the Fort.

Another view early in the siege; the first TWO turns eneded in tied die rolls before any cards were played. Actually, that was a bit historical, as Wellington was delayed for a time by the slowness of the advance of his siege train over the poor Peninsular roads. 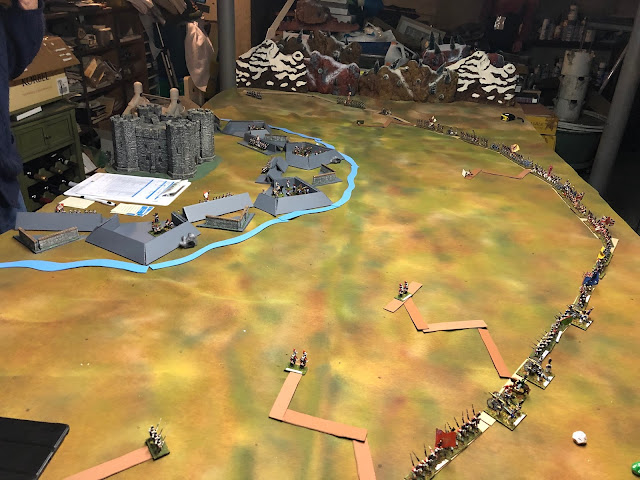 The saps advance; one British sapper has started construction of a segment of the 2nd parallell, at medium range from the Fortress. Disease has taken a heavy toll on the participants, especially the Defenders! 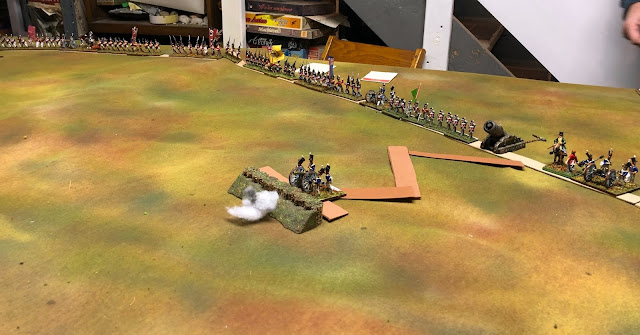 A British sapper has constructed a Gun emplacement (and paid for it with his life; the British lost a LOT of sappers in this game, in part due to an oversight on my part; sappers are an additional DOWN 2 as a target! The first (ineffective) shot has been fired at the walls. Note the Siege Mortar waiting in the 1st parallel. 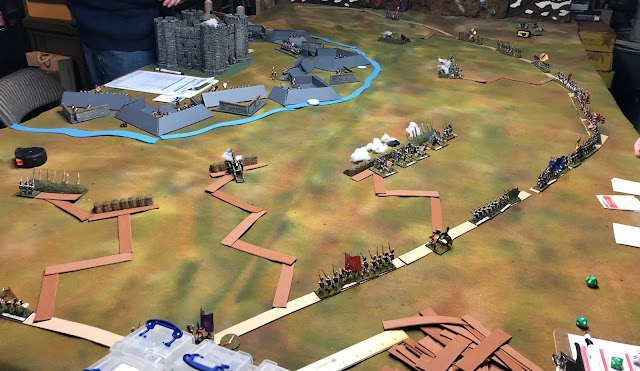 After a lot of losses, the saps have advanced and gun positions have been constructed allowing shelling of two of the Fortresses' Bastions. 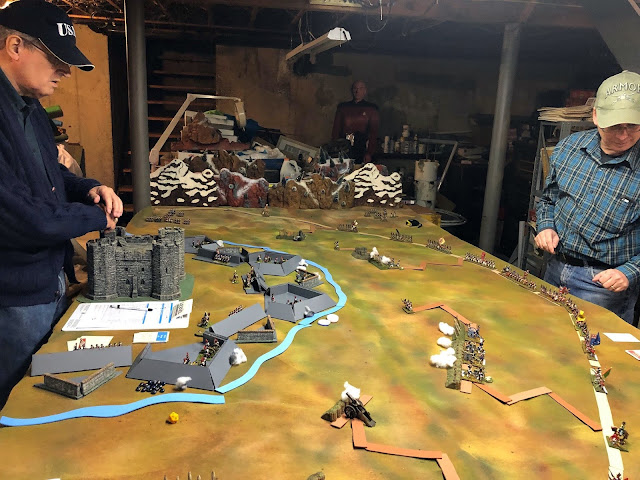 Accurate fire by John's defenders is wreaking havoc on the British gunners (too accurate; they should have been another DOWN 1 as a target!). More Disease thins the ranks and drains the Morale of both Besiegers and Garrison alike. 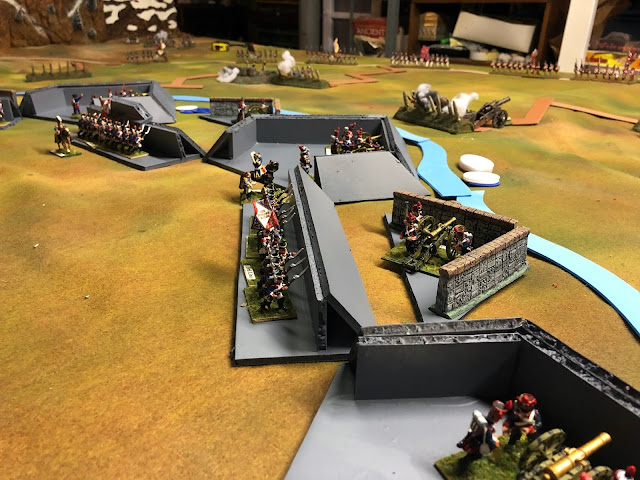 The British have made modest progress at battering two of the Bastions, but are a long way from achieving a Breach! 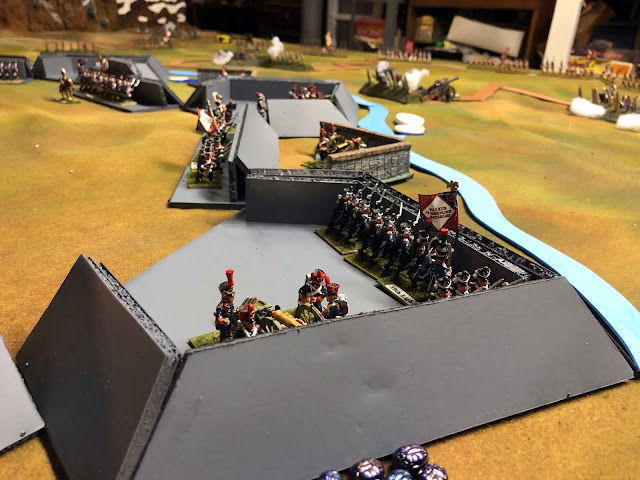 The triangular structures are Ravelins; they must be destroyed before the walls beyond can be targeted. 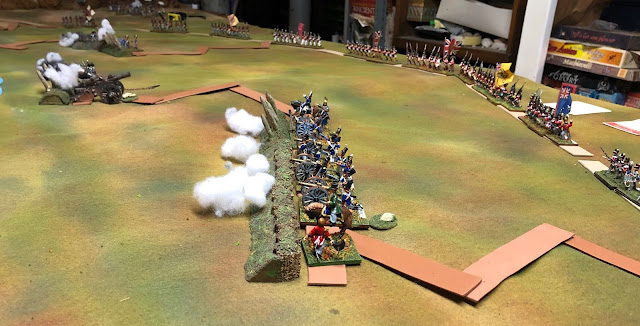 The British guns burn up powder like crazy... as do the French defenders! 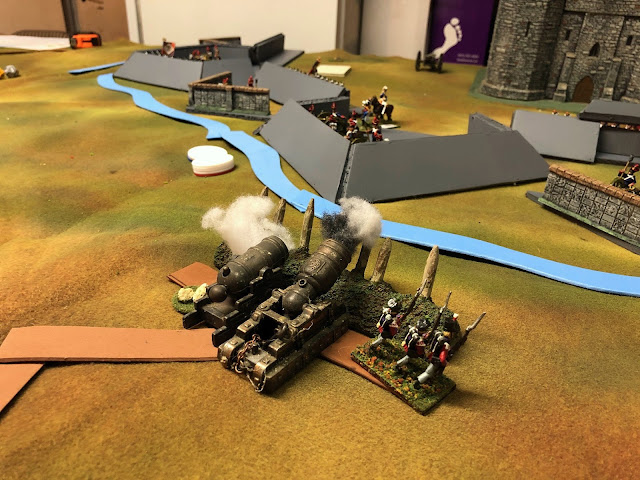 Heavy Mortars fire on the town beyond the walls, hoping to shake the Morale of the defenders. In the end, however , it is the British that run out of Siege Morale points first. The siege is lifted, and Wellington must return to Portugal to try again another time!

A short video on the Siege of Badajoz

I made a LOT of mistakes in running this game, but we still had a blast with it. Eric Burgess's Vauban's Wars rules are nearing their final version, and have developed a lot from the earlier version we had play tested a number of years ago. We will probably do another run of this game soon (with new rolls for the setup, and possibly some minor changes in the forces. I made the fortress walls and Bastions all in the past week, and hope to pretty them up some, plus add representation for the Glacis/Covered Way beyond the ditch for that game.
Posted by Gonsalvo at 8:51 PM