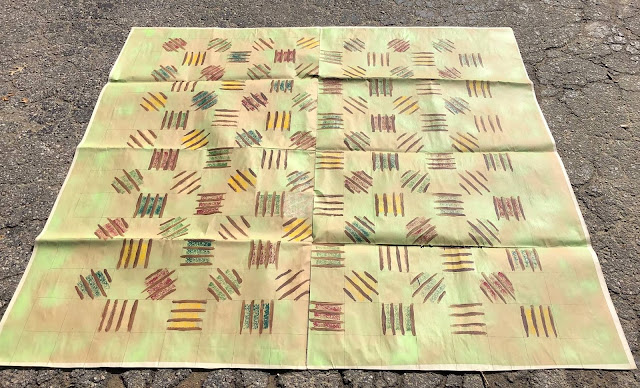 Back in 2008, I made a series of 6 x 6 foot gridded table coverings for a set of games of Pikette that I ran at Historicon that year. They were made from 3 foot wide rolls of brown paper that can be purchased for very little at Home Depot and similar DIY stores. The version above was done using all paint for the design. 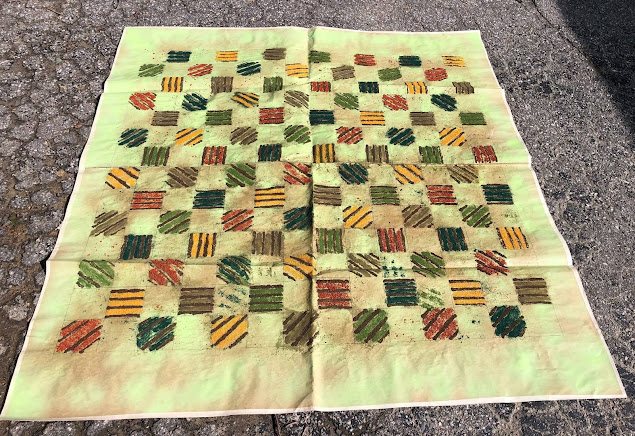 Two 6x3 feet sheets of paper are taped together on the back with masking tape; on some example I taped the edges as well to prevent tearing. This version uses flock for the colored 3" squares. Pretty but perhaps impractical... although the flock has actually stayed on fairly well after 12 years! 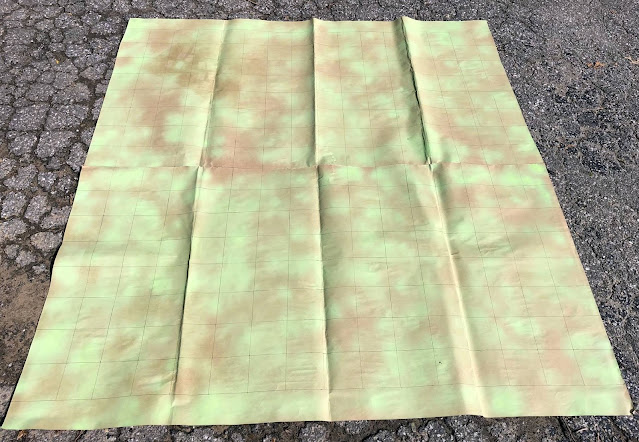 Here's plainer vwersion, where I just drew on the 3" grid and didn't bother with anything more fancy. 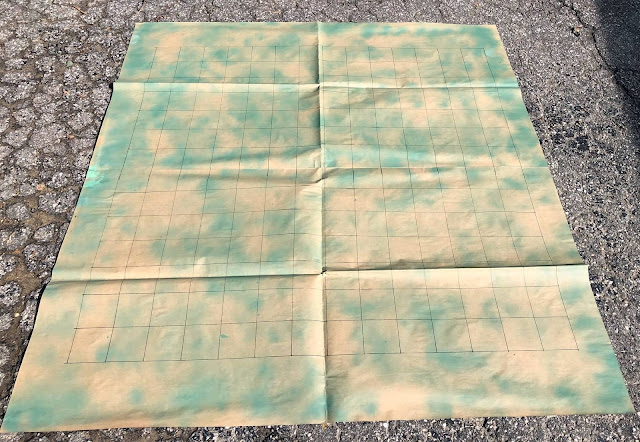 Another example with a different shade of green spay paint and a 3" grid. 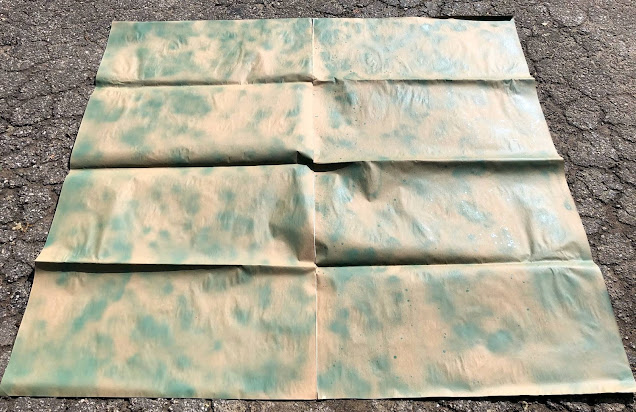 When I was looking for something to use with To the Strongest! for my attempted cyber game with Jared, I found that I had done a 5th such sheet, above, but  never done the grid. That was ideal, as I wanted a 6" grid for this project. So, I started with this, seen laid out on the drive way. 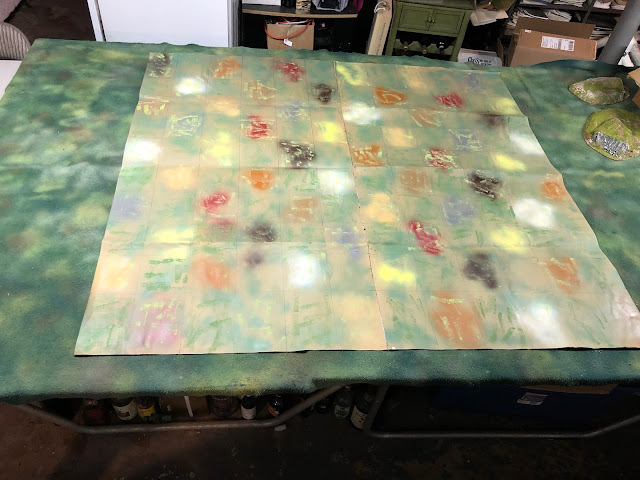 I drew the square grid on with a black ink pen, and then applied a pattern of spray paint burst to the boxes. Eh, a little to blotchy! 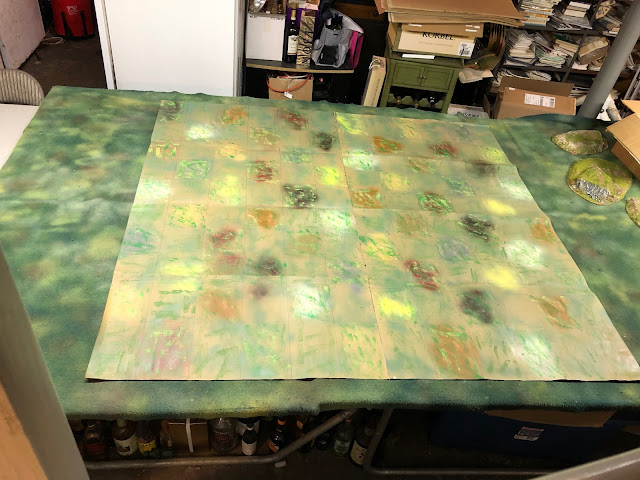 I toned down the effect by using a sponge and dabbed on several shades of green overlying the paint. Better!  This is the covering seen in the "Punic Heirs" game a few weeks back. The brief trial remote game with Jared made it obvious that the grid needed to be bolder for that usage. 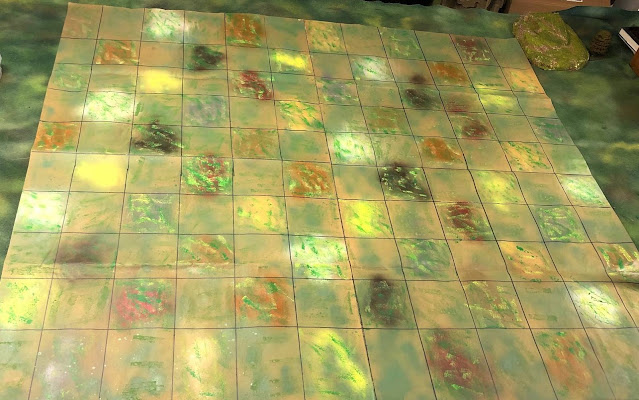 Last week I went over the grid with a heavy, broad black Sharpie permanent marker. You can see how much better the grid stands out now. For an in person game, In prefer the very subtle grid, but foer remote games, clearer is better! 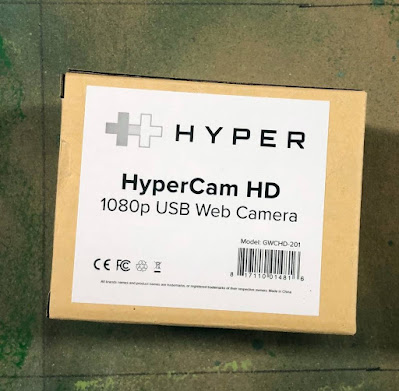 The other thing my attempted game with Jared disclosed, was that the Camera on my aging laptop didn't work. So I got a decent quality web cam for my next attempt. 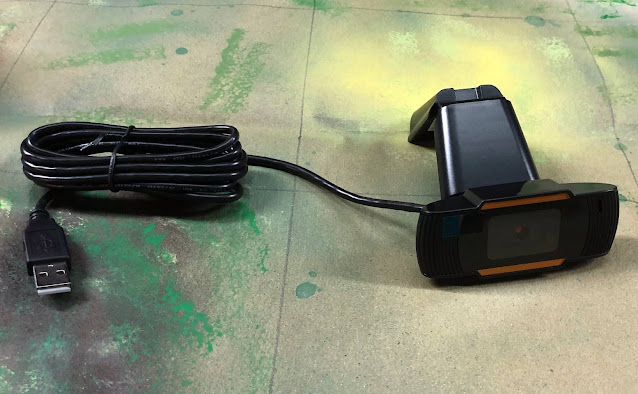 I've been too chicken to try setting it up yet, as I fear that I will find that it doesn't work with my laptop, so I might wind up having to get a new one anyway! 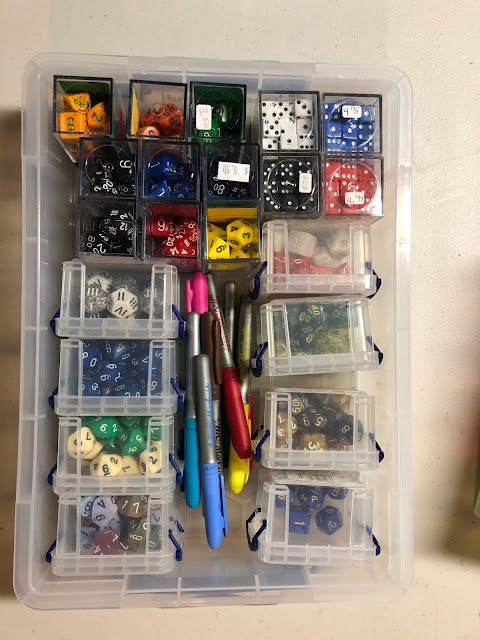 The wargames equivalent of organizing your sock drawer - organizing the bulk of my dice collection!
The Great Dice Caper (TM) of Historicon 2018 necessitated replacing the bulk of my dice, and also resulted in the loss of one of the cheap plastic tackle boxes I used for organizing them. This is a 4.0 L Really Useful Box, with a bunch of Chessex dice in their cases, and other dice (D10's) in very small RUB's. Piquet/FoB style games require a set of polyhedral dice for each player. Snappy Nappy and Galactic Knights both require many D10's, which are what are in many of the RUB's, along with a dozen 12 sided "D4's" (Tetrahedrons really don't "roll" very well, do they?) Anyway, now they are officially "ready to roll"!
I am considering whether to run a game or two of To the Strongest! for remote gaming conventions. Of course, before that can become a reality, I have to test out the camera, etc. From the games that Tim has run, it seems as thouigh at least 2 cameras are best.  We'll see!
Posted by Gonsalvo at 10:16 PM