A Garden Party: Rome vs Later Macedon with TTS! 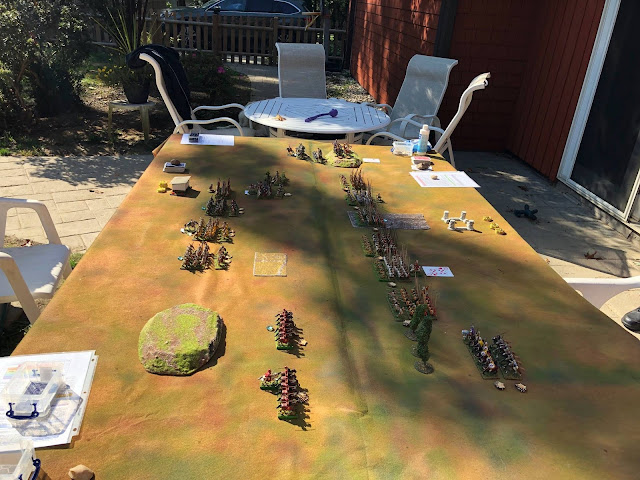 This past Saturday was a beautiful October day; sunny with highs in the mid 70's Some brief correspondence revealed that John was available for a "socially distanced" and masked outdoor game on the Patio. With such a game needing to be set up and taken down quickly, To the Strongest! was on tap once again, with the game providing an excellent excuse to put the mass of Macedonians painted in 2020 on the table at last!

In setting up the game, I discovered that the latest TTS Army list book had what is now the third take on handling the elusive tactics of the Polybian Roman army,  called Quincunx formation. This is similar to the 2nd version, with the ability to exchange ranks, rally, and "reload" Pila all as a part of the same action, and being allowed in the ZoC of the enemy. The twist is that the Triari are now incorporated, making the Quincunx a Deep (3 hit) unit that also maneuvers as though it is a normal depth unit. To balance those advantages, the save was degraded to 7+ when the Hastati are in the front, and 6+ when the Princeps or Triarii are in front. The Triari can also detach on an easy activation. Still, the 15 point cost for a regular unit makes them pricey.

In the event, John took the Macedonians and their phalanxes, whilst I commanded the army of the Republic. 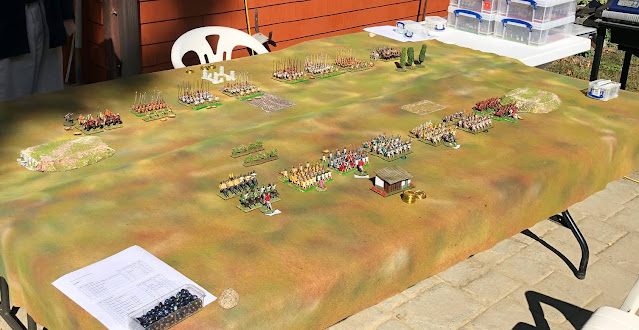 Initial Deployment. as seen from the Roman lines.

Situation, end of Turn 1; the Romans moved first, but my right Center command balked at advancing, playing an Ace for their Group Move attempt. 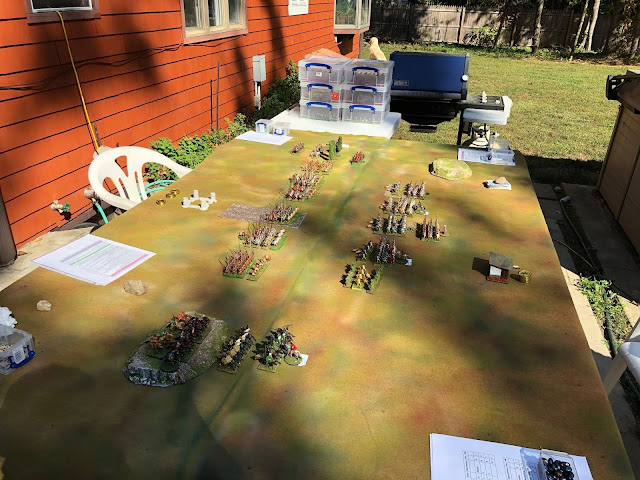 End of Move 2: My left flank cavalry chuck Javelins at the Thracian Cavalry looking down upon them from the hill, who shrugged them off with ease. My right flank cavalry is trying to maneuver to outflank the Companions, and the Legions are shifting to the right; there are 5 Quincunxes and 6 Phalanxes; not good!  The Macedonians also have an extra light Archer unit. 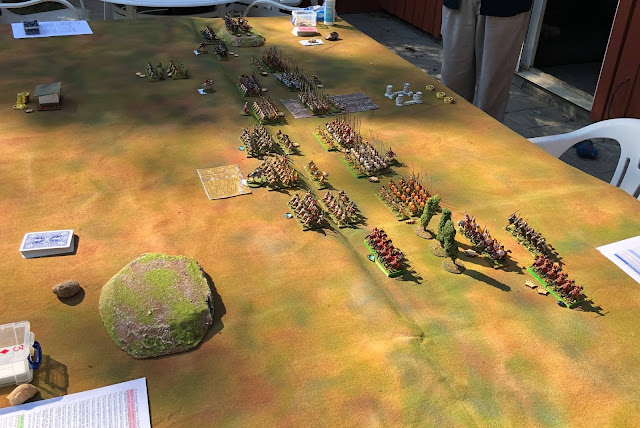 End of Roman Move 3 - My velites chuck Javelins at the Macedonian lights screening the phalanxes, but barely manage to eliminate a single Archer unit. My Cavalry gain the flank of the Companions, but are very vulnerable to themselves being outflanked! 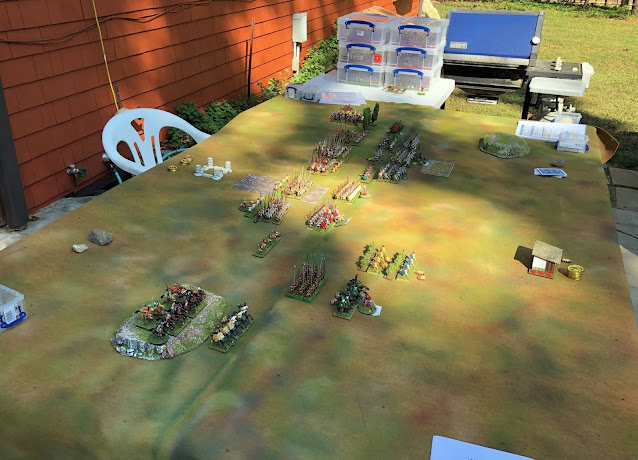 End of Macedonian Turn 3. The Roman Oblique maneuver has lead to John sending his 6th phalanx to chase down by Heavy cavalry. That shouldn't work... should it? His Companions flank my right side Cavalry and inflict a hit, but are unable to activate again to charge them in the flank a second time! 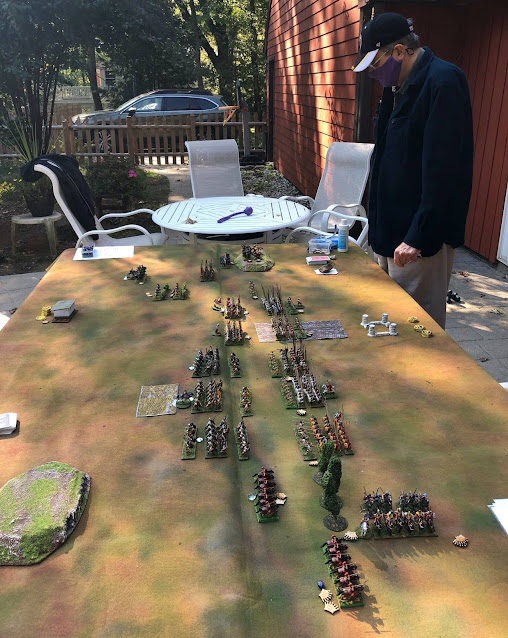 End of Roman Turn 4 - My velites have pulled back so that my Legions can attack, but those subsequent activations fail. My cavalry fall back on both wings. John looks on, suitably masked etc. I am so used to wearing a mask for hours at a time at work now that I hardly notice wearing my own. It was so sunny and warm when I was setting up the dame that I am wearing shorts, a hat against the sun,  and a T-shirt myself! 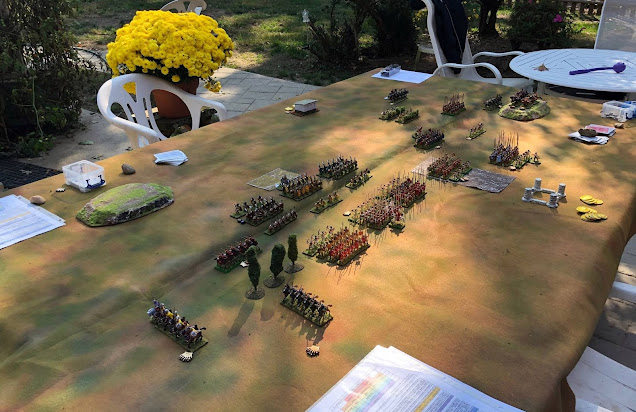 End of Macedonian Turn 4 - The companions have eliminated my Right Flank HC, one of his phalanx has eliminated one of my Legions, but another is driven back. Of course, now I remember that I once again failed to take the break tests  for units orthogonally adjacent to a destroyed formed unit! 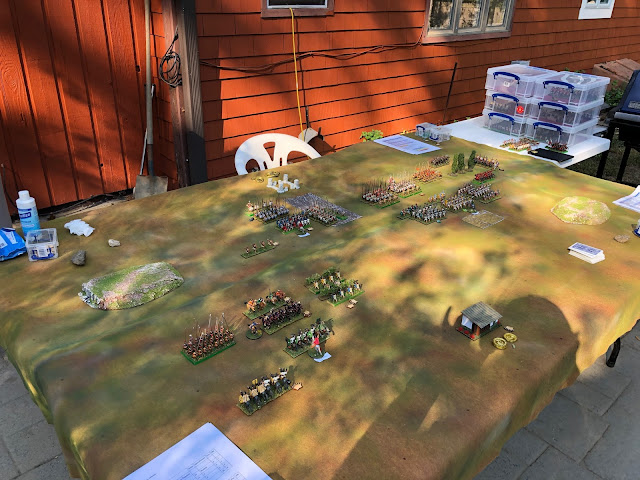 End of Macedonian Turn 5 - my poor left flank cavalry is being pursued by huis cavalry and a phalanx - not good! An out of Command Phalanx ought to be darned hard to get to move... but not for John!  :-)
My leftmost Legion followed up on the battered phalanx, injuring it again, but John's spare phalanx has turned to flank me. "What doubly difficult maneuver? Need a 4+?  No problem, mon! 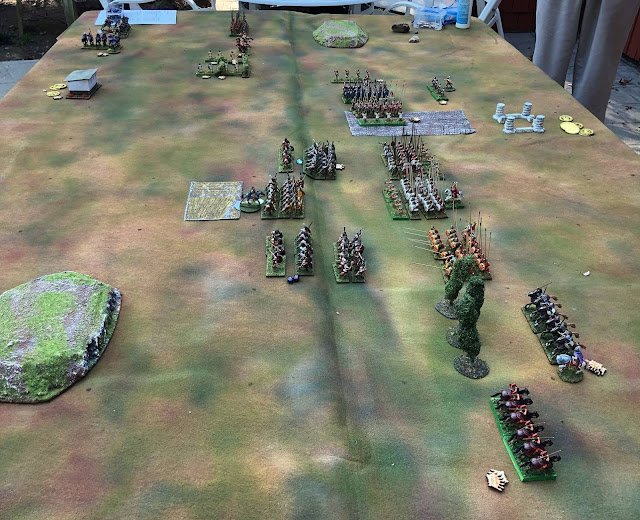 End of Macedonian Turn 6, and the game, My remaining right flank cavalry unit rides down the Companions in a flank charge, and I eliminate the one battered phalanx and then nimbly turn to face off against the phalanx to my flank,  but all of my Legions are on the verge of collapse, most of my velites have been eliminated by enemy fire, and my left flank cavalry has been eliminated. Game over, man! It wasn't as close as it looks, with John still having 6 Victory Medals left at the end of the game!
All in all it was a solid win for John and the Macedonians. My Legions didn't perform very well, but their Javelins and pila consistently missed, and my saves for the Quincuxes were abysmal. The pre-emptive strike of the Pikes in melee (if they hit you, you can't battle back, and they always go first... although the pila cast comes before that, for all the good it did the Latins in this game.
We started shortly after 1 PM, and with John's help, it was all packed away by 4 PM. This was the first FTF game I have run in almost a year! We may be able to mange one in the Garage in November some time; we'll see! After that face to face games are likely to out until at least April next year.
Posted by Gonsalvo at 11:51 PM

Email ThisBlogThis!Share to TwitterShare to FacebookShare to Pinterest
Labels: Ancients, Macedon, Rome, To the Strongest