It was good to be back at Jared's school for the first time since February 2020, when the Pandemic was just appearing as a real concern on our collective radar screens. The first game day of the year was held there this past Saturday. Initially the numbers signed up was small, but there were ultimately 20 students there. We all arrived about 8;30 AM to set up and be ready to start at 10 AM, when the students were to arrive.

Jared had set up a Northwest Frontier game set in Afghanistan, using The Sword and the Flame, I believe.

A view from the other end of the table. 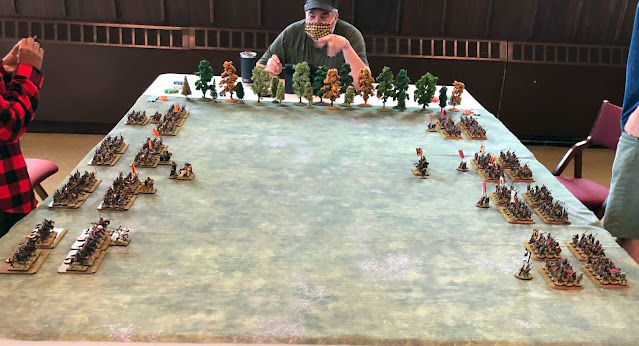 John Spiess set up a  Medieval clash between invading Vikings and defending Northumbrian Saxons.
He used a gridded board and his own rules, which seem fairly simple but also well thought out.

I set up my game, with the late AM sun bathing the table; it had departed by game time! 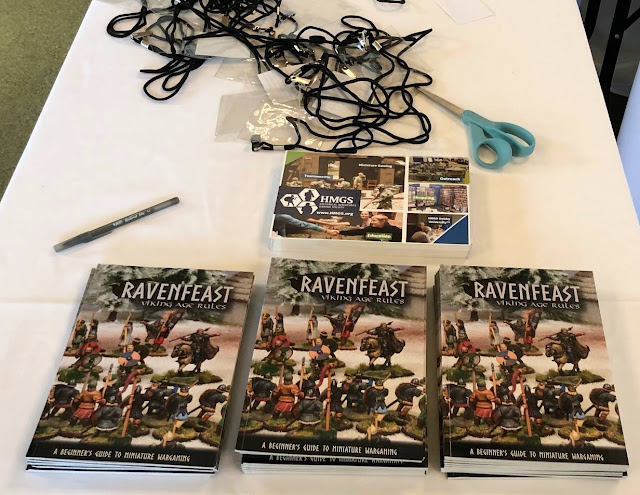 Name tags for the players ( I always try to learn the players names as quickly as possible, and address them by name whenever possible), and some HMGS fliers, plus a freebie handout for those interested, evidently produced by the Little Wars TV guys. 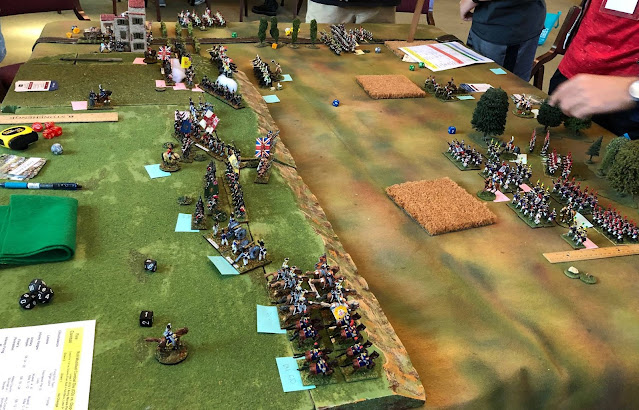 I had the players write the CD and DD values onto sticky notes to attach to the underside of the bases, color coded by command. In retrospect, this was probably unnecessary. 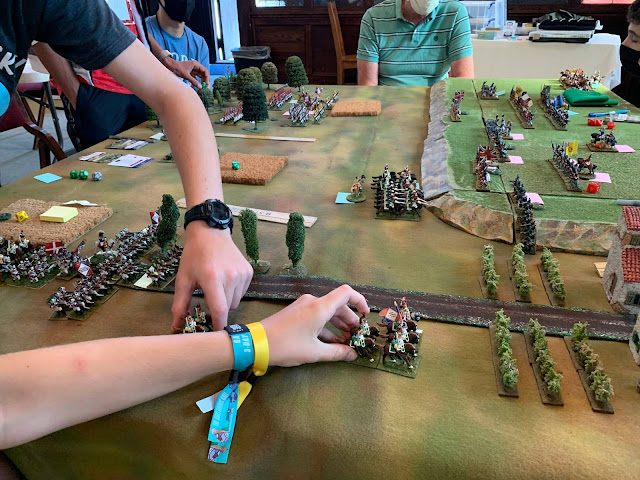 The French Dragoons have taken advantage of a triple move to advance far ahead of their infantry. A Beau-Sabre in the making!   Note that everyone wore masks for the entire event, with no so much as a bit of a whine from anyone. It seems they could teach the "adults" in the US a thing or two. 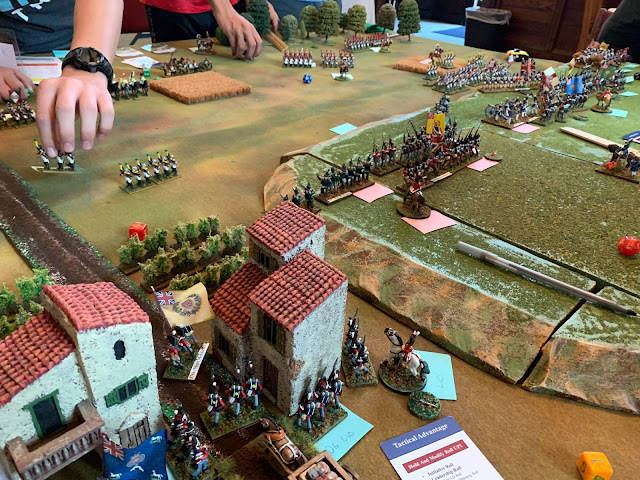 British reinforcements arrive in the nick of time to hold Vimiero village.
. The Dragoons had a shot at a charge at the ridge defenders, and at seizing the Town of Vimiero before the British reinforcements could come up, but in the end wound up getting their noses pretty well bloodied by the British infantry (especially the Rifles!) fire. That caused the loss of quite a lot of Morale Points before the French Infantry could hope to have an impact. 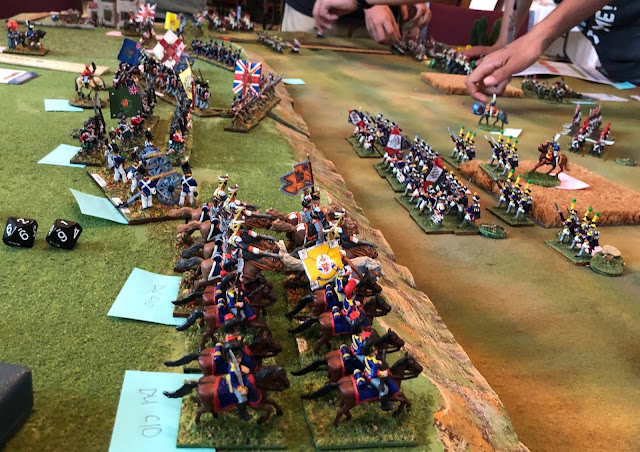 Mid game; the French infantry are advancing to contest Vimiero ridge. The young lady acting as Sir Arthur and also commanding the centre infantry brigade was a dice demon, rolling little less than a "10" all game! 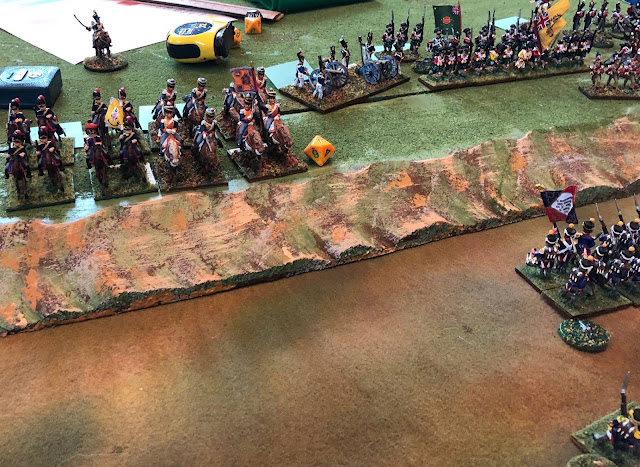 The brigade of British and Portuguese Light Dragoons had the chance to advance around the left flank of the French advance. There commander rolled three straight "1"'s on a D10, and that being a Jalapeno Die, even!
This occurred during the mid game,  where Sir Arthur had a 12 to 1 roll Initiative, and thus an 11 card run to play. In the end, this wound up having surprisingly little effect, partly because the French were still largely out of Musket range, and the British were understandably reluctant to advance out of their excellent defensive positions. 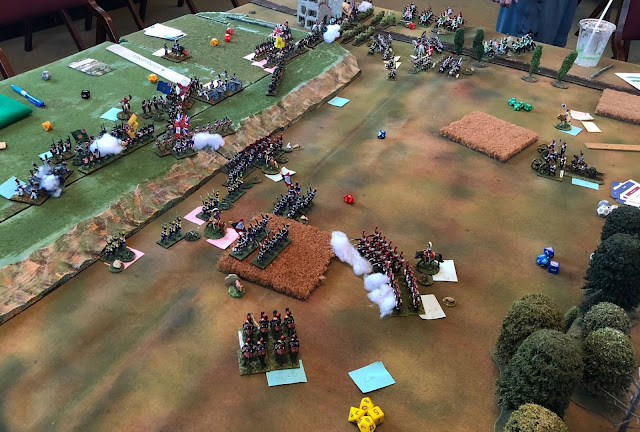 On the next try, though, the British Cavalry rolled a triple move, but ODD, so they could not change their facing, nor engage in immediate melee. The commander astutely moved them deep onto the flank and rear of the French, all the way to the edge of the woods. On a subsequent LEADERSHIP card they changed facing to threaten the flank and rear. They then finally got an even roll and charge home into the rear of two elite Grenadier battalions. One battalion escaped with just 1 UI loss and withdrawing, but the unit charged by the British LD suffered 2 UI to an even roll and was thus destroyed outright. Ouch! Revenge is a dish best served up with black powder; On a subsequent French MOVE, a triple magic move allowed 2 fellow grenadier battalions to respond to the threat, by pouring the fire of over 1,000 muskets into the flank of the British Light Dragoons; they ceased to exist as a fighting force thereafter. Note the clouds of smoke with empty ground in front of them!
The French then used part of their 11 card run  to launch an infantry attack upon the center, taking losses from musketry but having a decent chance to prevail in two melees, but didn't have the die rolls to pull it off. A French Dragoon charge on their far right against a British unit that had deployed out of the village and into the vineyard also came close but was ultimately repulsed with loss as well. The French ran out of Morale Points, and started having to pay the British. Less than halfway through the 11 card initiative run, the French turned an ARMY MORALE card, and failed the roll spectacularly; Game over, man! The French had 0/19 Morale points at the end, while the British still had 11/15 remaining. The London Gazette subsequently portrayed the battle as a major victory for the British Expeditionary Force.
In fairness to the French players, as has been observed, this isn't an easy scenario for them to win at all, and the British players had consistently superior die rolls. I think the French would need at least another battery and another infantry brigade to have a realistic chance of prevailing.
John gave the following synopsis of his game: It basically started off with a disastrous charge by the Saxon cavalry. 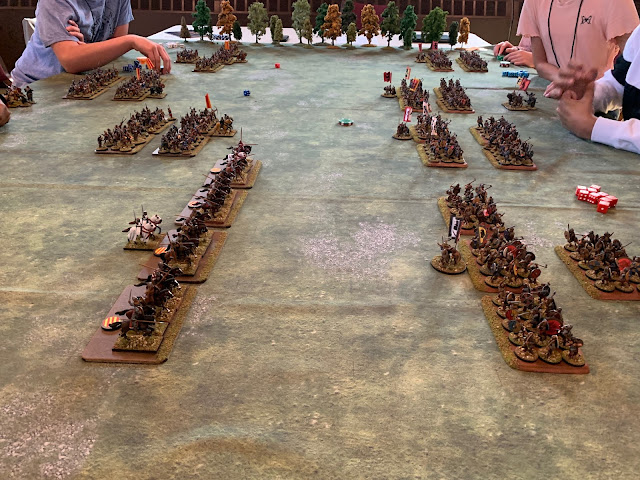 Saxon Cavalry preparing to charge the Viking Shield Wall.
They hit a fresh shield wall and got demolished.  The Vikings were doing great. But the Saxon players started to figure out their advantages over the Vikings. 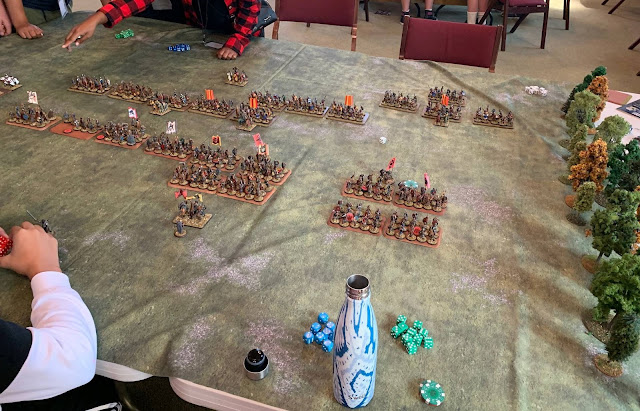 They held their infantry back, and started loosing volley after volley of arrows into to Vikings. 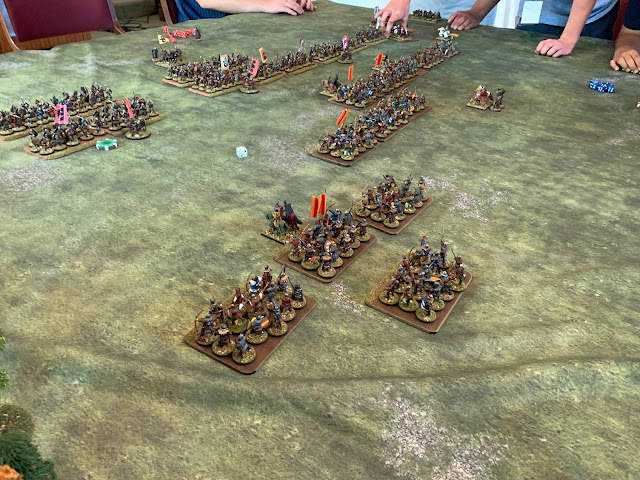 The Vikings shot back, but didn’t have as many bowmen.
This forced the Viking warbands to start charging into the Saxons and a general melee followed. However, the Viking warbands became separated and the sole remaining Saxon mounted knight unit found a gap and plunged into it.
This disrupted the entire line. Shield walls started collapsing on both sides, but the Saxons kept passing their morale checks while the Vikings slowly melted away. In the end, the Saxons recovered enough from the early setbacks to snatch victory from the jaws of defeat. The kids wanted a rematch, so we’ll have to see if Ivar and the Great Heathen Army will try again. 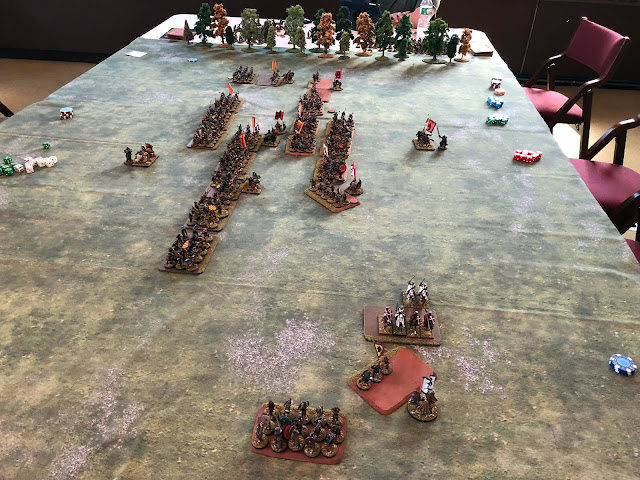 Near the end of John's game; "Not this time, Raven-face!" The Vikings are repulsed back to their Longships! 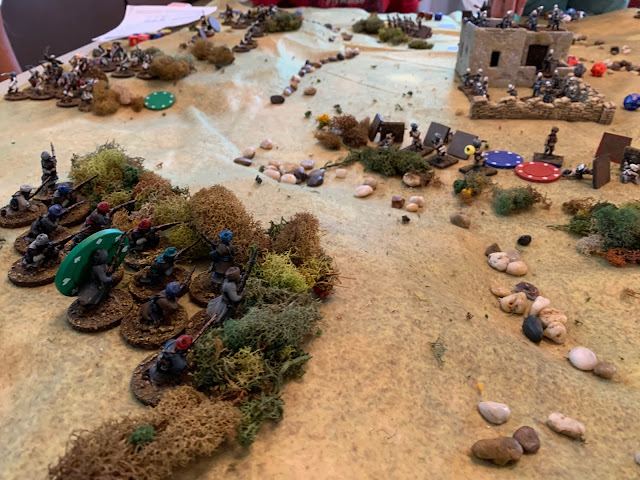 Jared contributed some shots of his game as well... 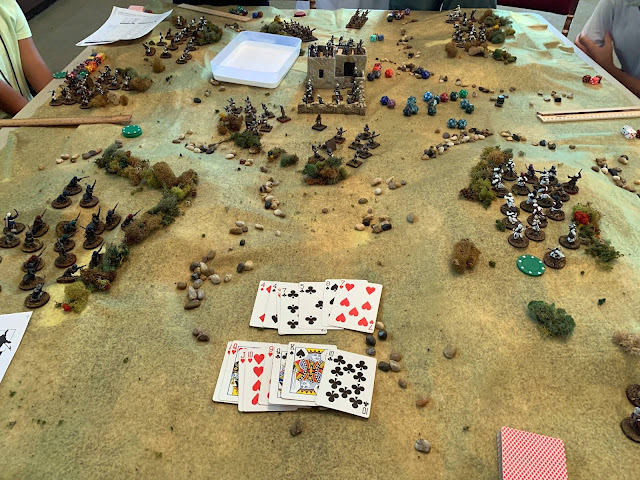 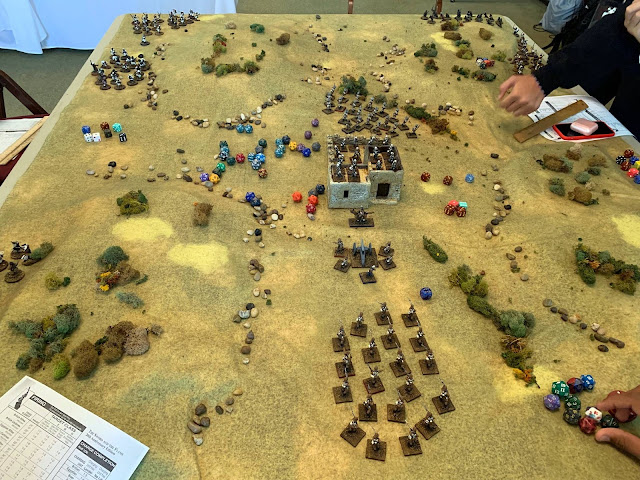 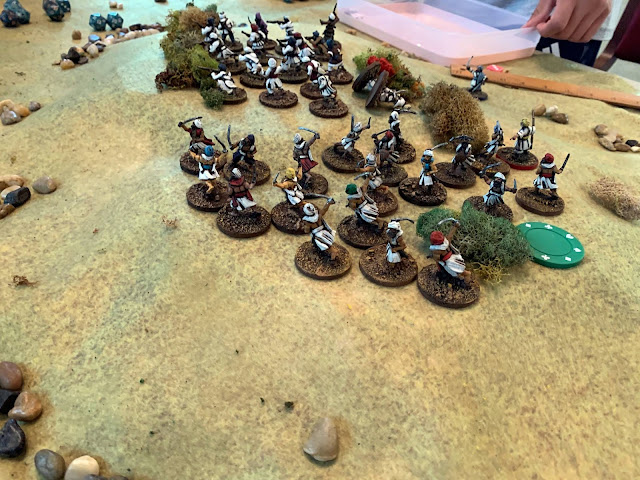 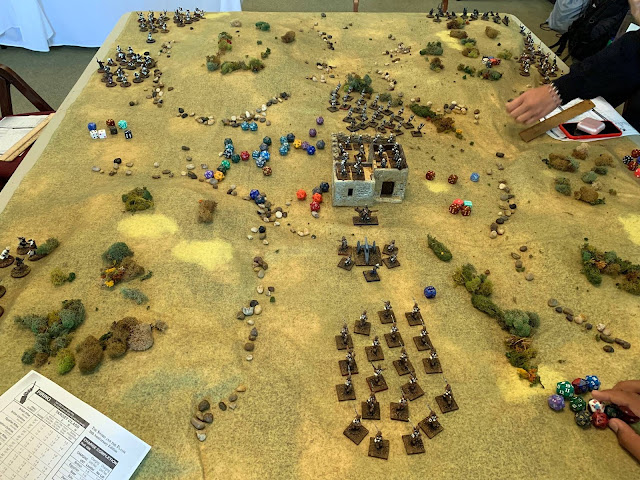 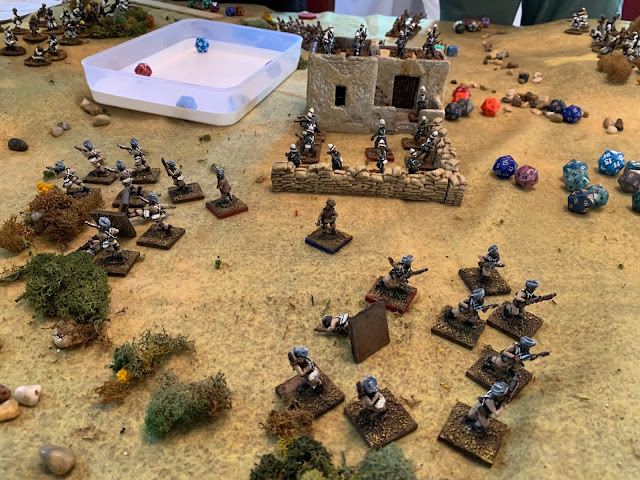 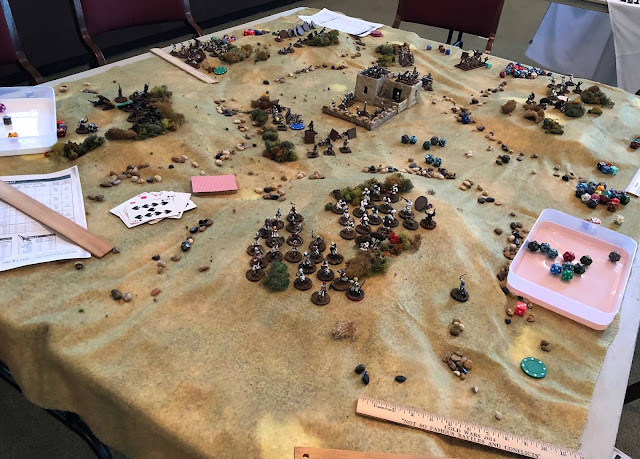 I spent a fair amount of time after my game chatting with students about the Napoleonic Wars, how I got into the hobby, figure scales, where to get models, terrain, etc. This was spurred in part by some of them thumbing through the short Ravenfeast booklet. Jared and I had a discussion about the event, and the broader outreach efforts of HMGS Next Gen, to foster miniatures gaming in Middle School, High School, and College age students. More about that in another post(s), perhaps.