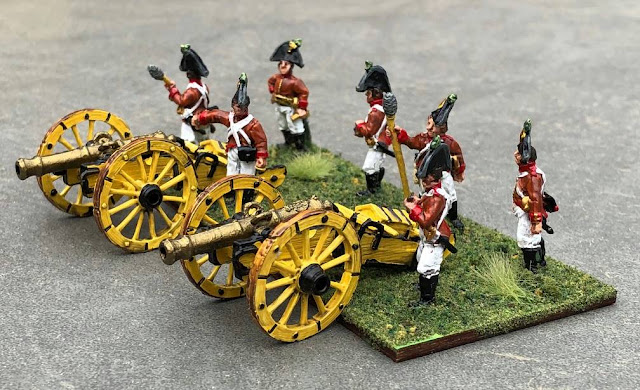 With the recent additions to my Austrian infantry and cavalry, the artillery arm needed some additions. 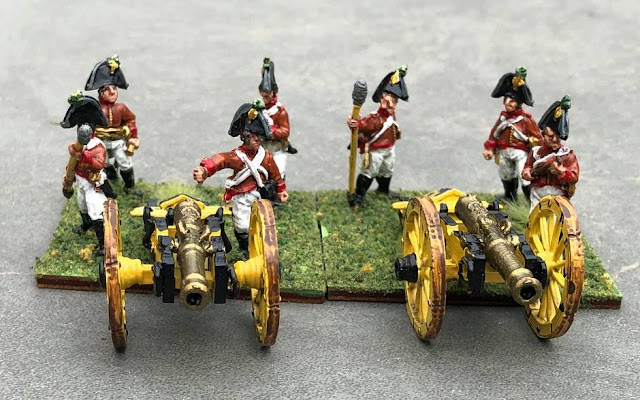 Fortunately, there was already a generous supply of guns and crew on hand for just such a long anticipated need. 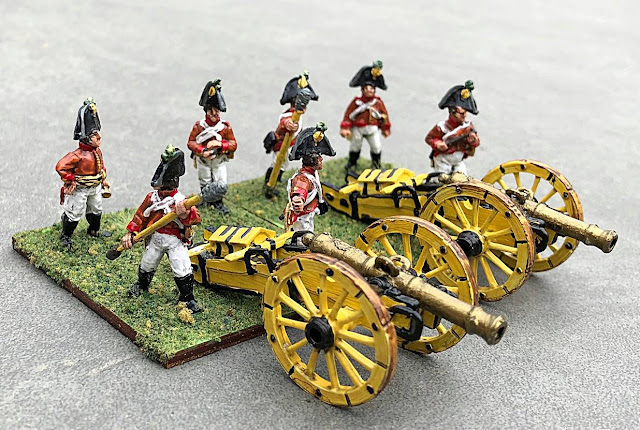 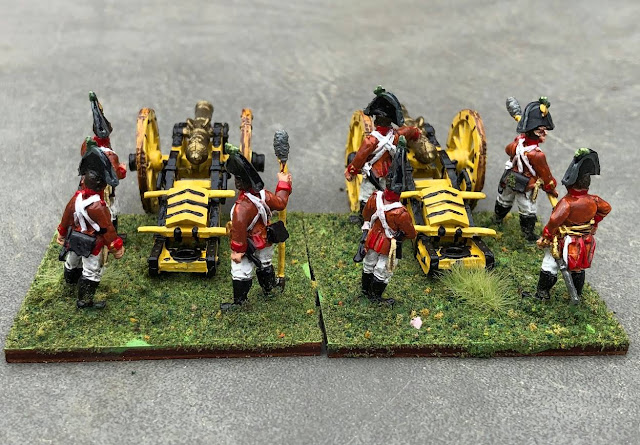 The Austrians assigned these heavy batteries to serve as the Reserve Artillery of the individual  Corps. However, they never did establish any Army Artillery Reserve. 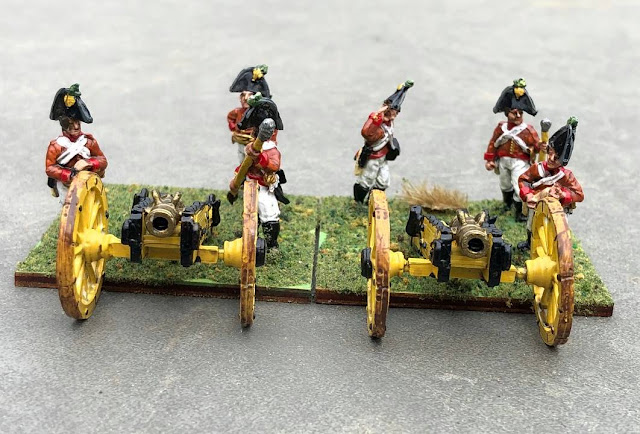 A howitzer "battery". In most Napoleonic armies, Howitzers made up anywhere from 1/6 to 1/3 of the total guns available. 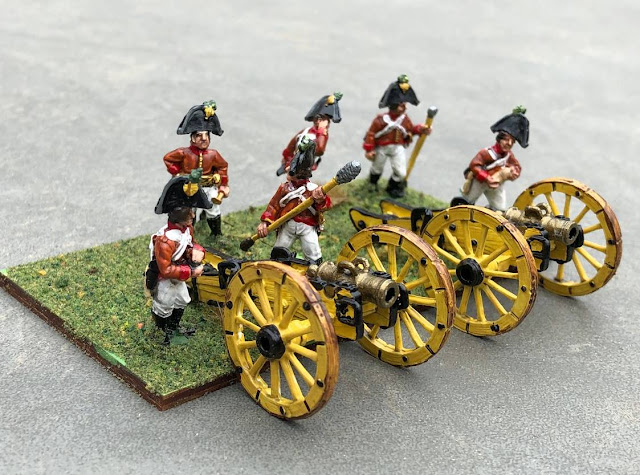 It was very rare to see howitzers combined to form separate batteries, so these tubes will actually be distributed among the many Austrian 6 lber foot batteries. 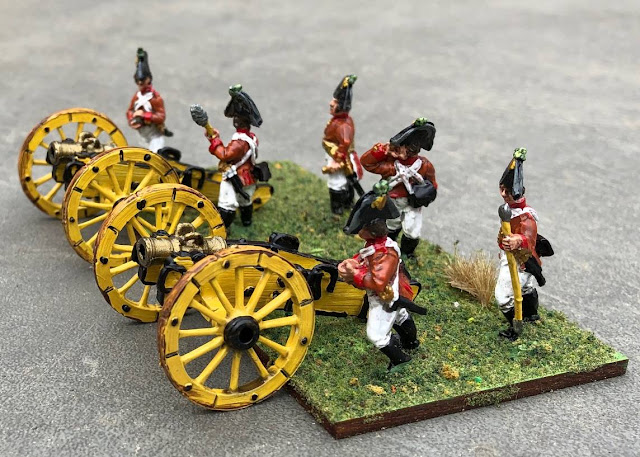 Delta Ceramcoat Straw was in use once again, here for the gun carriages. 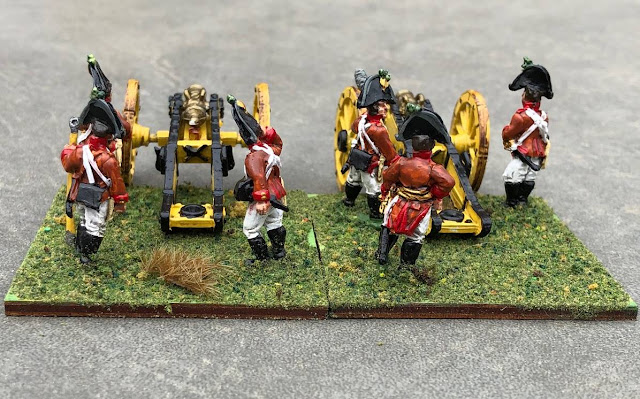 From a gaming standpoint, the howitzers can be swapped into 6 lber or 12 lber batteries. 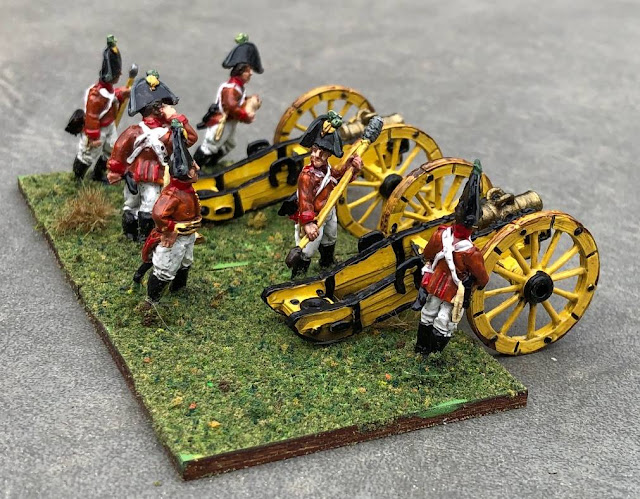 This creates some additional flexibility for different scenarios. 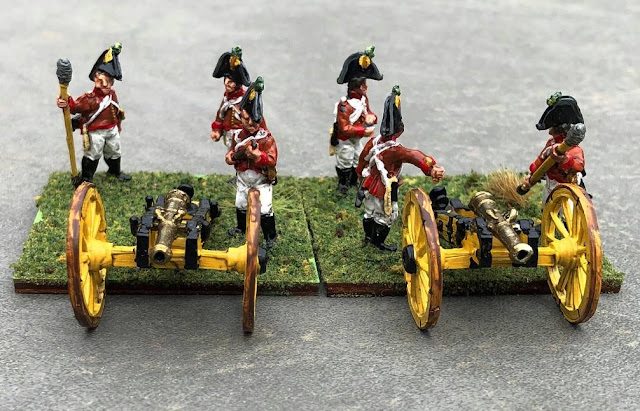 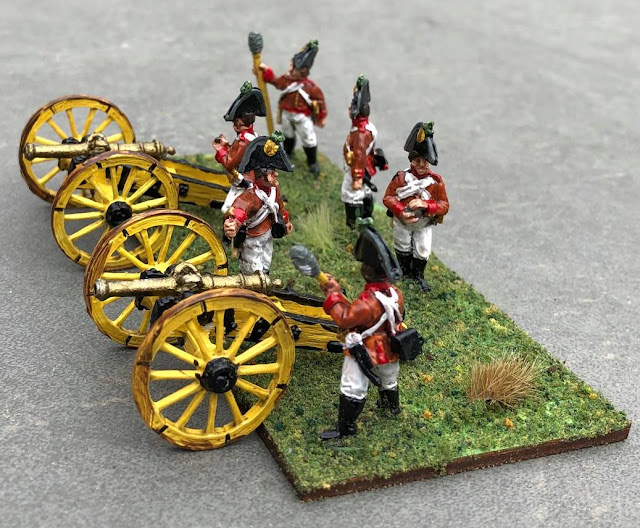 This gun was certainly the workhorse of the Austrian Artillery arm. 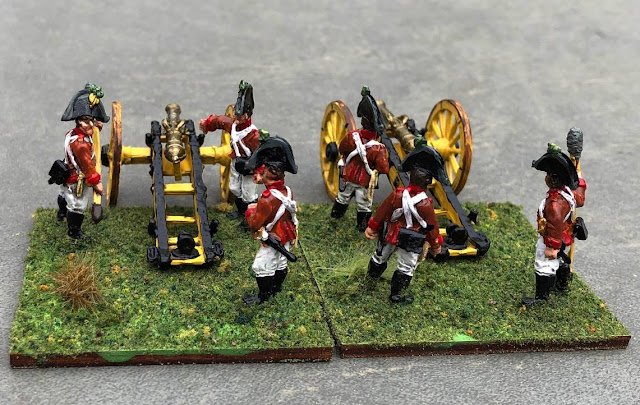 The Austrians were still using the excellent and standardized artillery system devised by Lichtenstein prior to the start of the 7 years war. 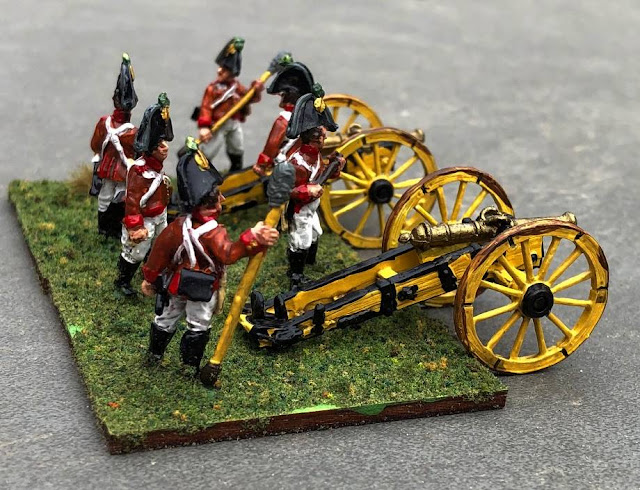 By the Napoleonic wars, the French artillery reforms, first the Gribeauval system, and then the later system of the Year XI, had surpassed the Austrian designs. 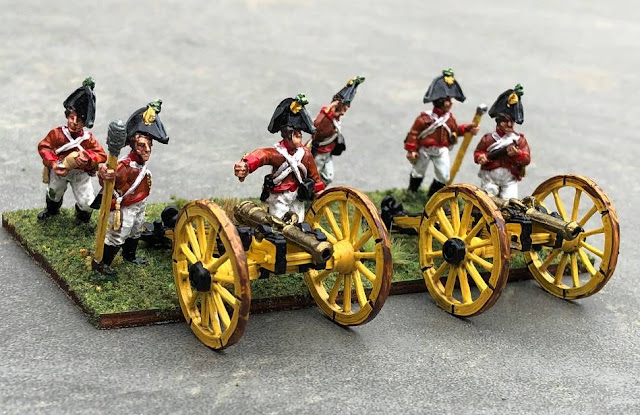 A second Austrian 6 lber battery. The gun carriages were (comparatively) light - perhaps too light, as they were more prone to break down with use than their French counterparts. 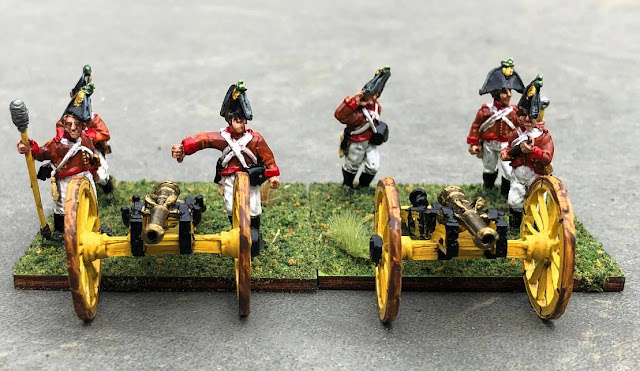 All of the guns and crew figures are Sash and Saber castings. 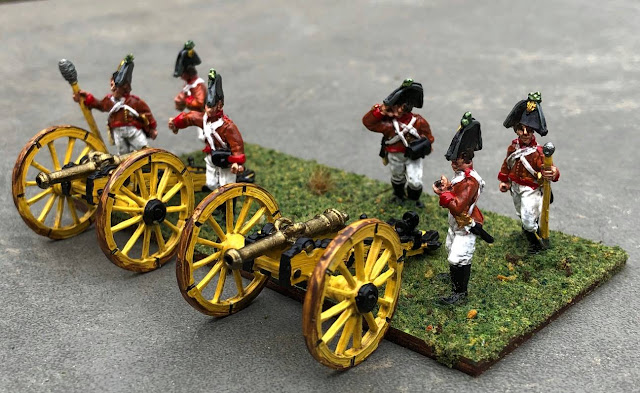 It is really a shame they don't make the famous Austrian cavalry guns, though! 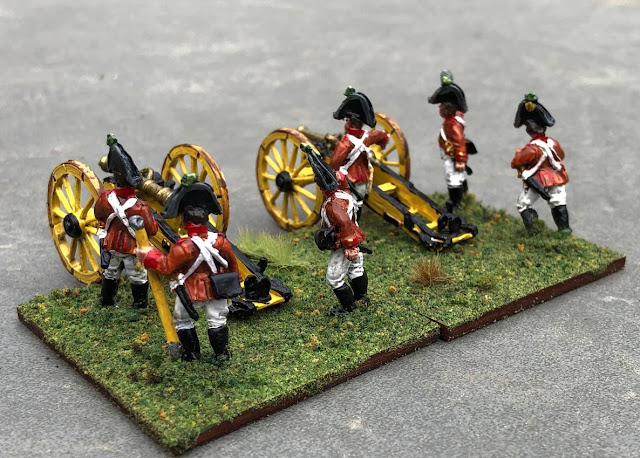 I painted the jackets Delta ceramcoat Terra Cotta, and then over painted them with Delta CC Burnt Sienna, which is already semi opaque straight out of the bottle. 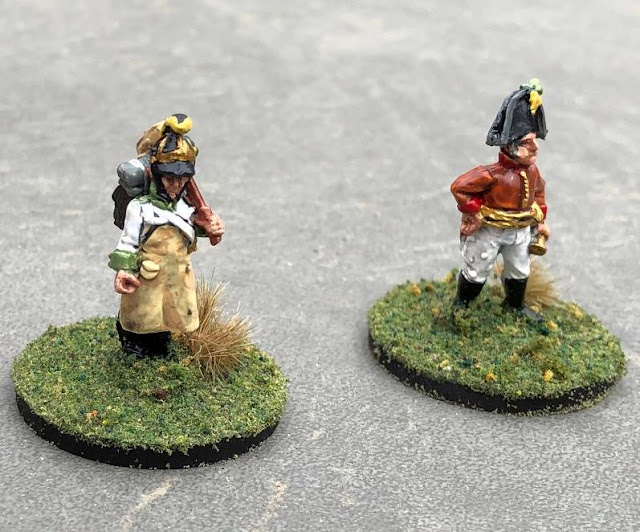 When I was organizing the figures for the artillery units, there were a couple of spare figures. 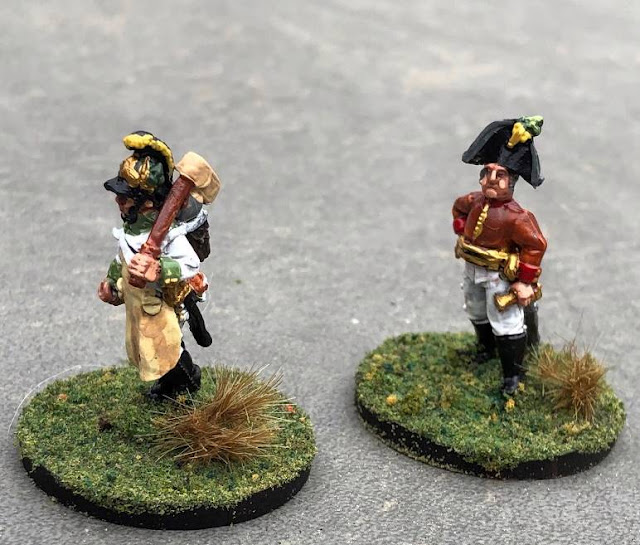 The officer will work fine as a Grand battery commander. 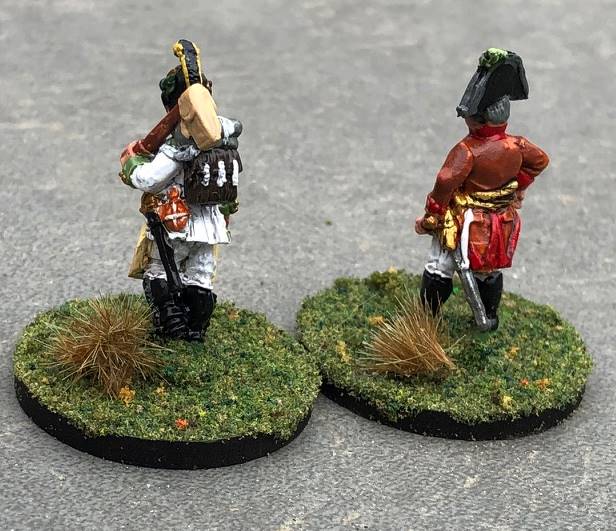 The sapper (Zimmermann, which literally means Carpenter) should prove useful for sieges and  assisting in the construction of  bridged and field works. 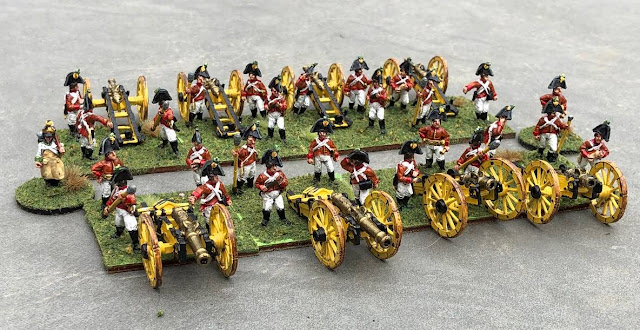 As always, I don't glue my guns to the bases. This allows a limbered battery to be denoted by turning iot around to face backwards. Someday I will get to painting more actual limbers. But that is for another day...
Posted by Gonsalvo at 7:45 PM