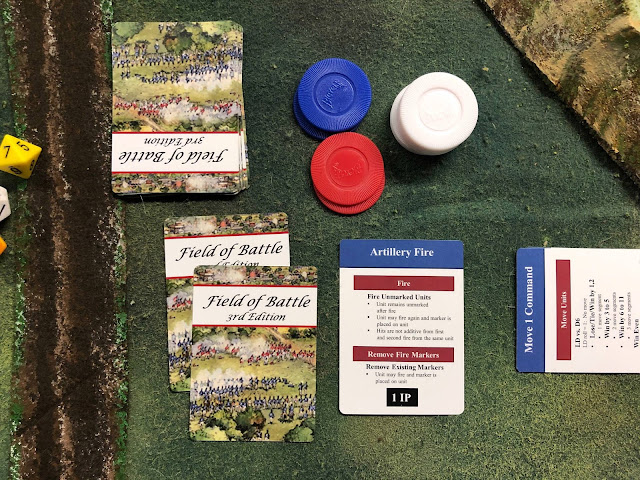 Karl starts off his initiative by turning an ARTILLERY FIRE card. In Classic Piquet this card is Artillery Reload, and in FoB1 and FoB2 it was Artillery Firepower. There has been little change in how this card works, however.  When a unit "shoots", it is marked with "smoke"; it cannot fire again until the smoke is removed, and this card allows you to do that. If the unit has no smoke on it, it can shoot and then remove the reultant smoke, leaving it ready to fir again. it could then shoot a second time, but then the smoke would remain. Units of the Active player can shoot any time they like, as long as they are otherwise eligible, and do not have smoke markers on them. 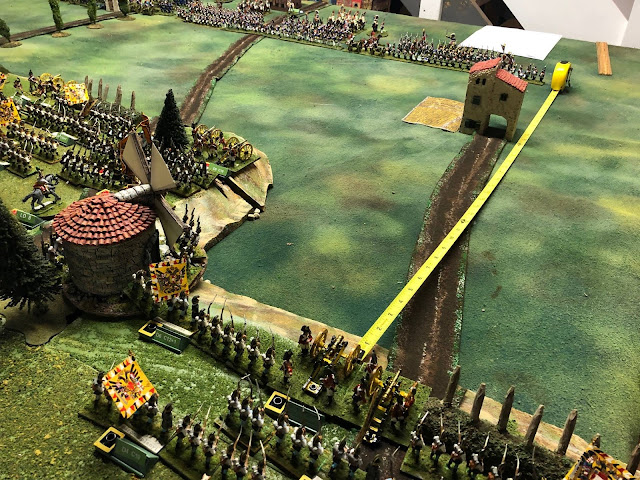 Karl's Northernmost battery is out of range - over 36" from the nearest enemy. 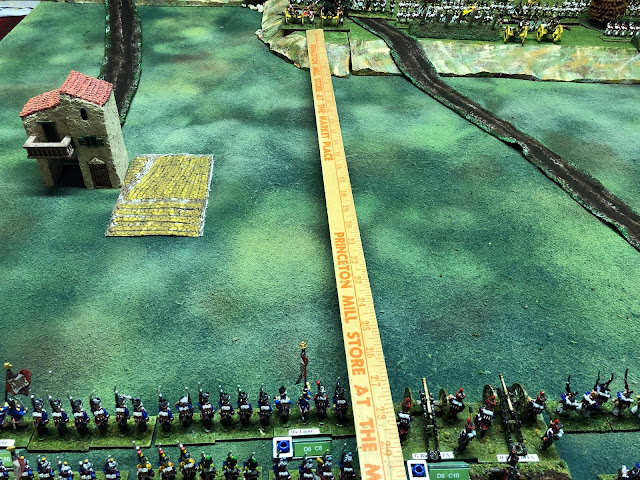 His next battery is over 24" but under 36" - long range for artillery. 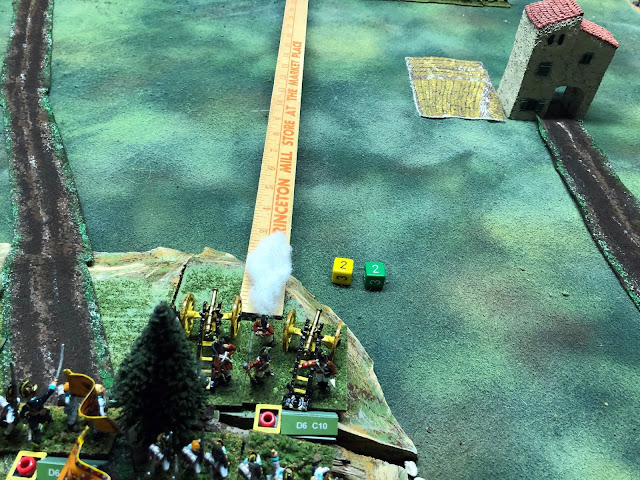 Tghe Battery's Combat Die is  C10. The target being at Long Range is a DOWN 2 modifier. The target's formation is Line, which is no change. The progression of Die Types is  D4 - D6 - D8 - D10 - D12 - D12+1 - D12+2 - D12+3  etc, with the maximum possible score being 12. .  Thus a D10 DOWN 2 die types is a D6. The target always rolls its defense die type; for most units, including this French Line, it is a D6. The shooter and the target both roll a D6, and they both score a 2. If the shooter's die (here yellow) is less than or equal to that of the target, there is no effect. The shooter is marked with smoke. This can immediately be removed because Karl is acting on tjhe ARTILLERY FIRE card. 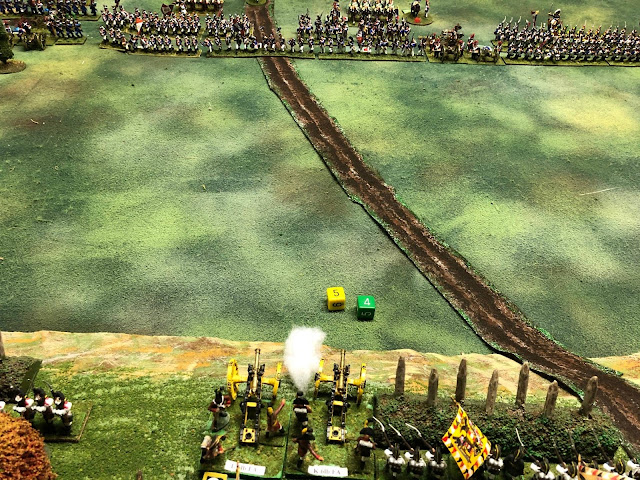 The next battery is also a base C10, firing at Line at Long Range - D6 vs D6 again. This time Karl rolls a 5 to the French 4 - one pip above the target. It takes 3 pips (hits) to cause the unit to lose one Unit Integrity (UI). The hist from 2 shots by the same unit do not add up, but simultaneous shots by different units do. Thuas thias shot has no effect, although the battery can "reload". 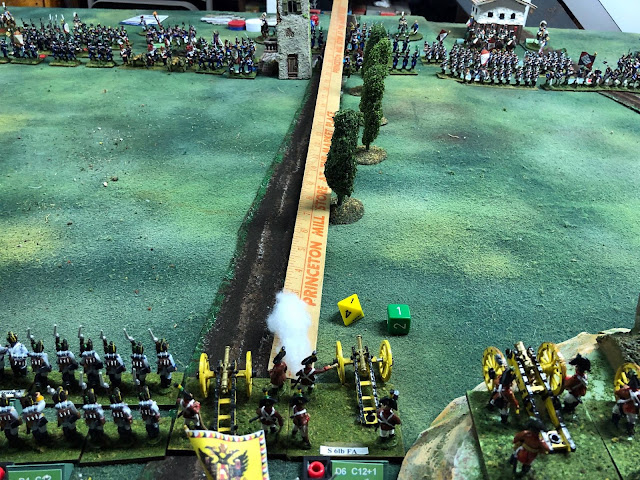 This battery has a better base CD - D12+1, the best possible. It is still firing at Long range (DOWN 2), but now its target is an unlimbered battery, which is an additional DOWN 1.  DOWN 3 from a D12+1 is a D8. Unfortunately, Karl rolls a "1" and misses again. The battery may "reload". 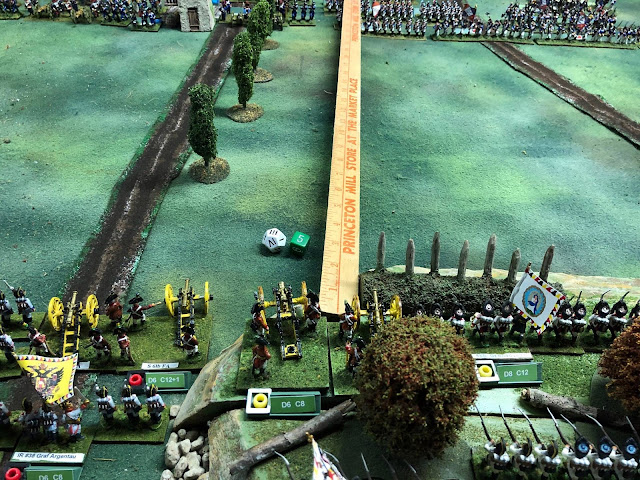 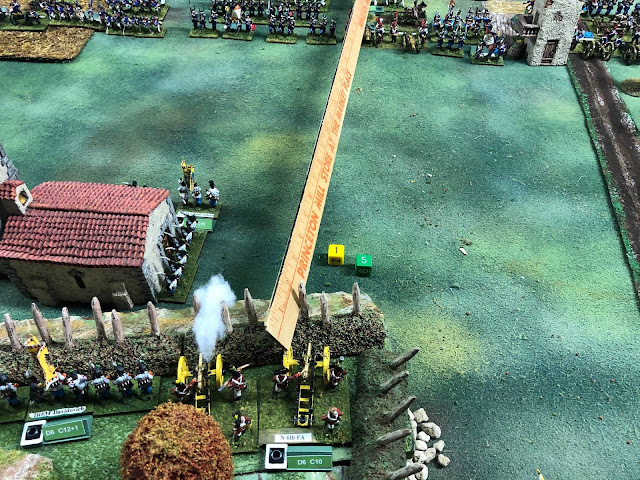 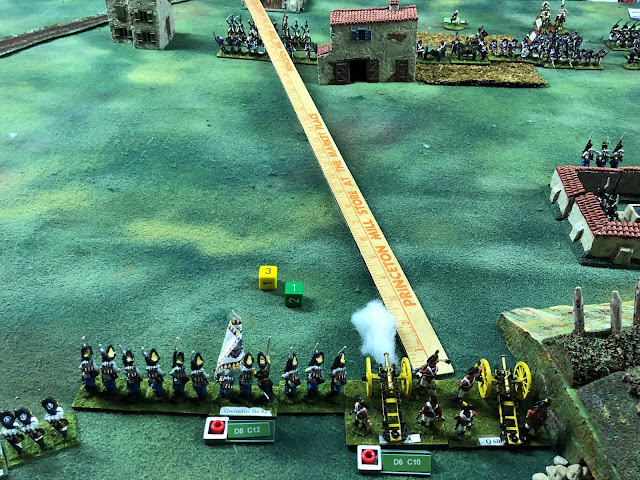 The same story again; the battery wins by 2, not enough (need 3) to inflict any ,losses. Had the Austrian roll been higher and EVEN, the unit would have been pushed back the difference in die rolls, and become Disordered. 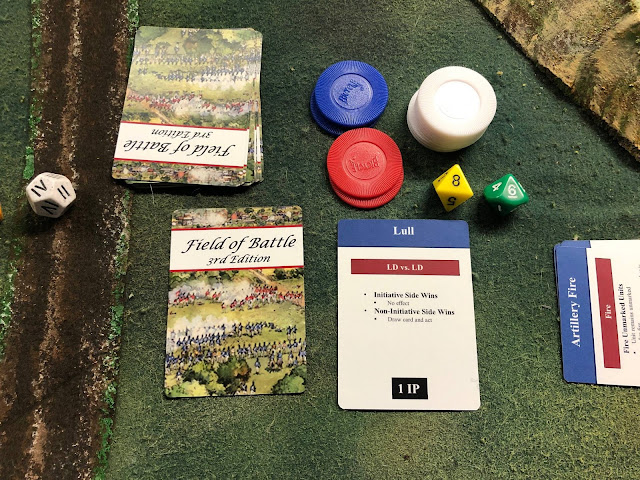 Karls' next card is a LULL. The opposing C-in-C's roll their Leadership Die, here a D8 for Karl vs a D10 . If the opposing commanders roll beats that of the active player, they "seize the initiative", and immediately play and act upon  card of their own, interrupting the Active player. As Karls's roll is higher, there is no effect. 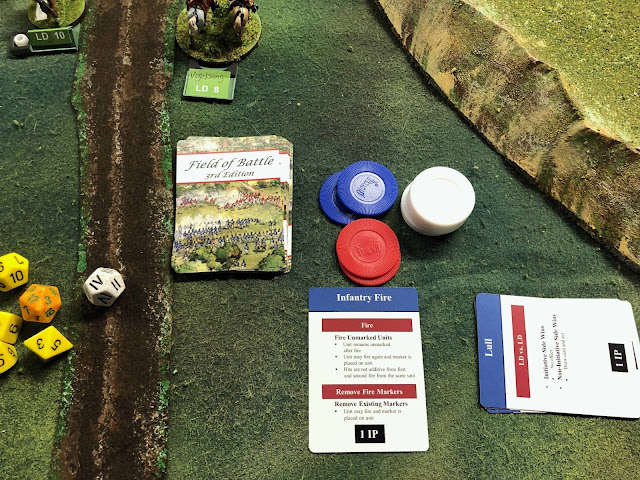 Karl's last card is INFANTRY FIRE. This works the same as the ARTILLERY FIRE card, except for, well Infantry! Long range for muskets is 6"; no Austrian infantry gave an opposing unit anywhere near that close now, so there is no action that Karl can take. This is what Massena was hoping for by giving the initiative to Karl - the ARTILLERY FIRE card had little effect due to the long range, and the INFANTRY FIRE card was useless. The Austrians may miss these cards later in the turn; there are just 3 of each in the deck. 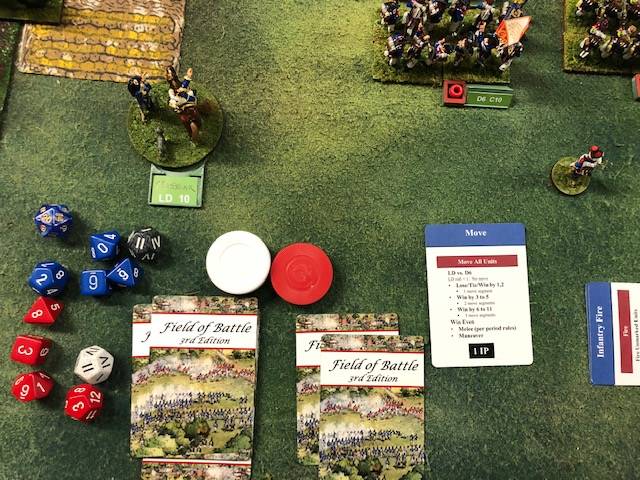 The initiative now passes to the French. Massena turns a MOVE card. With the French being the attackers, and needing to close with the Austrian position, this is going to trigger off a LOT of action.  We will pick up with that in the next installment.

(I actually had all of this and much of that written up, and some weird keystroke combination deleted everything! I have had that happen just once before in hundreds of blog posts, but I didn't have the heart to re-write any more than this tonight!)
Posted by Gonsalvo at 11:05 PM