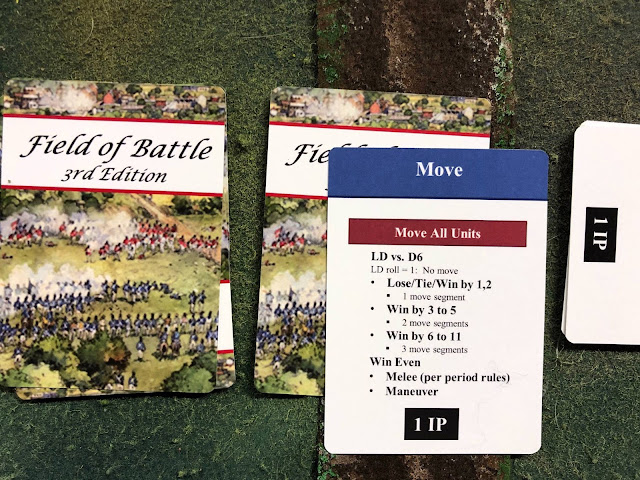 Karl's first card is a MOVE. 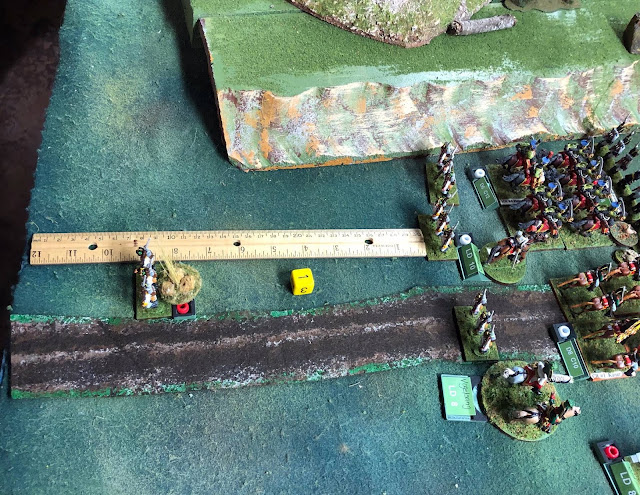 The first thing that must be done on a MOVE card is to move any routing units. All units that are routing move a full normal move segment (8" for infantry), plus an additional D6 inches. Routers stop at the table edge. If they have to move again on another MOVE card, they are removed from play (no additional Morale points are lost, however). 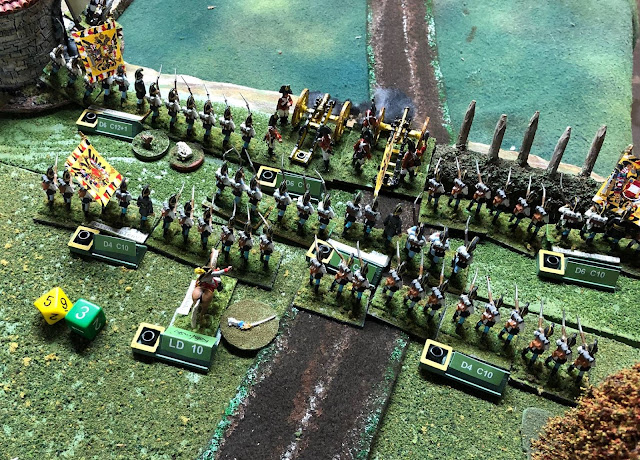 GM Kottulinsky gets one move segment, no fancy stuff. 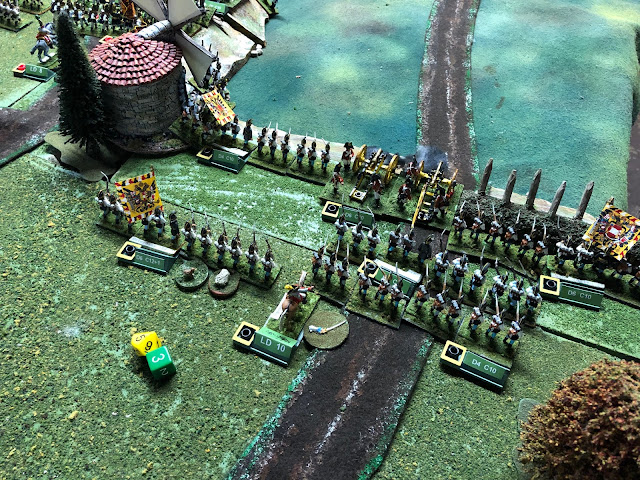 He uses this to exchange the damaged unit on the front line with a fresh one from the rear. Note that units my freely interpenetrate without penalty, but may only interpenetrate or be interpenetrated once per MOVE card, and may not do so and charge into melee. 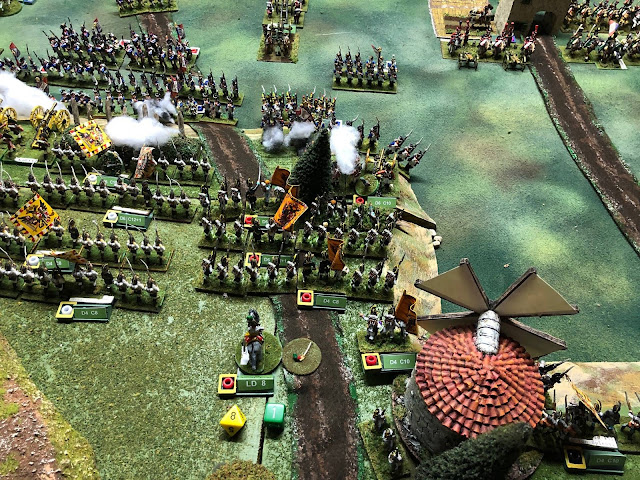 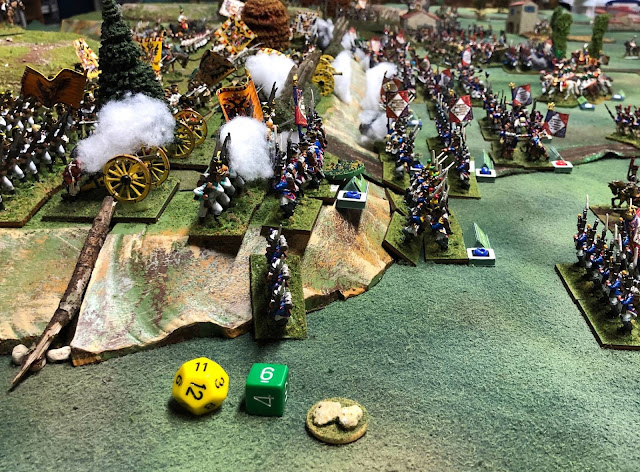 The unloaded and Disordered battery limbers, moves to the rear 4" (half speed for Disordered units),  and then unlimbers. A fresh Austrian battalion moves to the front and fires  D12+1)at the French column on the slope, inflicting a loss of 2 UI 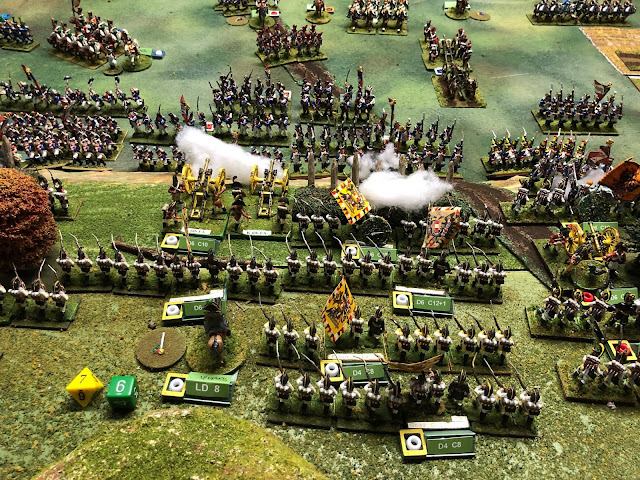 GM Soudain gets 1 move segment The now familiar Austrian Minuet ensues, exchanging unloaded and/or damaged front line units for fresh ones from behind.


A little mood music - Beethoven's Minuet in G, performed by Liberace (!) and company 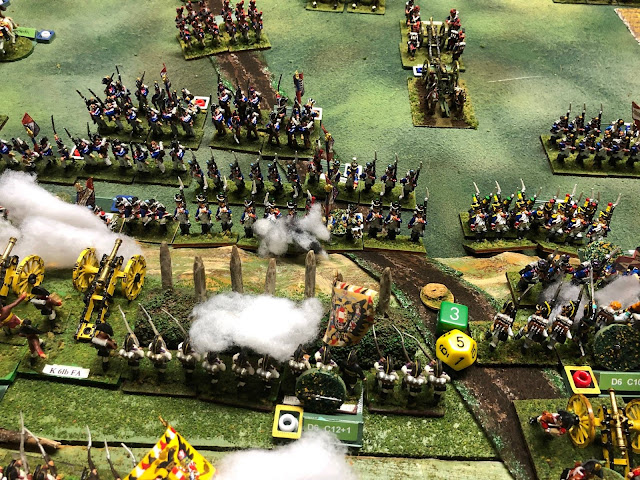 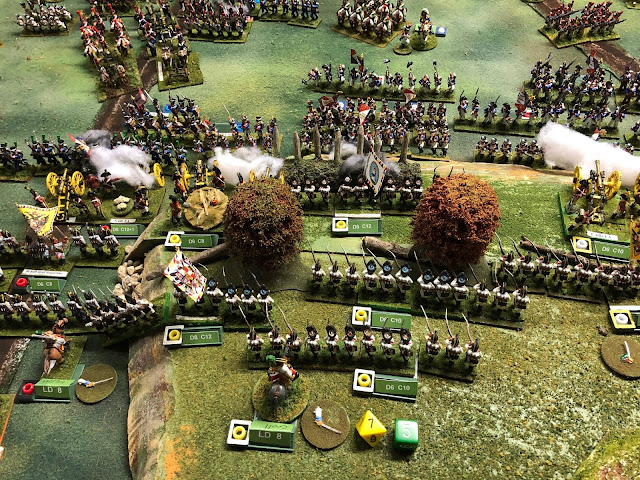 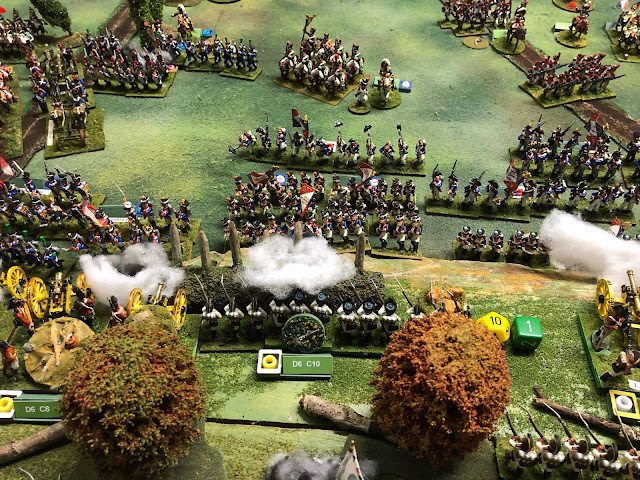 More exchange of lines followed by firing, this time routing the target with a loss of 3 UI!
"You've been Kaiser-licked!" 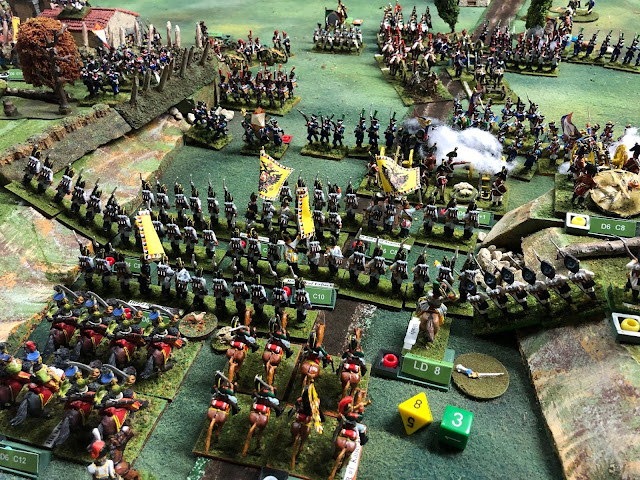 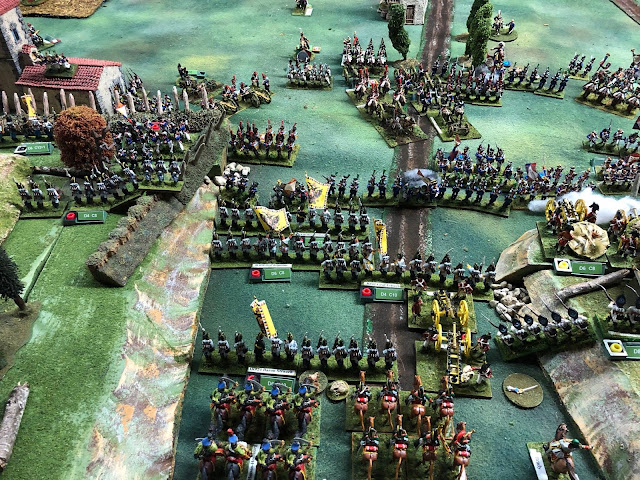 A lot going on here!  the unloaded and heavily damaged battery limbers and moves to the rear, while four battalions do some fancy footwork to move to the front. 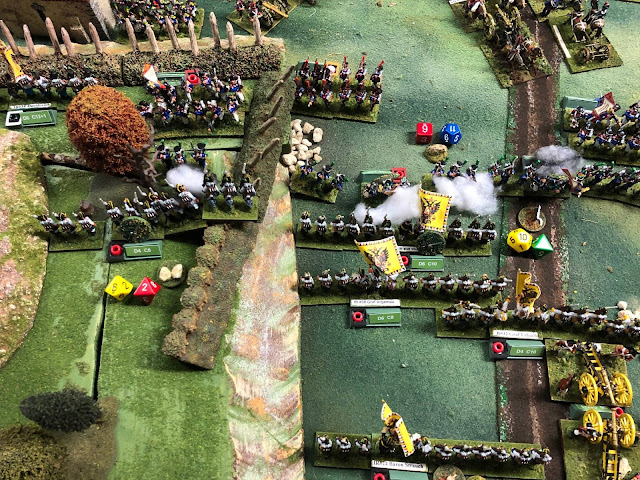 First the skirmishing Legere fire at the advancing Austrians in line, inflicting 1 UI, but not driving them off. The line then returns fire, scoring 2 hits and causing Disorder. The second Austrian line also fires at the Legere, and scores 4 more hits. With simultaneous fire, the totals are cumulative, and thus the Leger are driven back 6" in Disorder. Tjhey are not routed as the 2 UI/Even were not inflicted on a single roll. 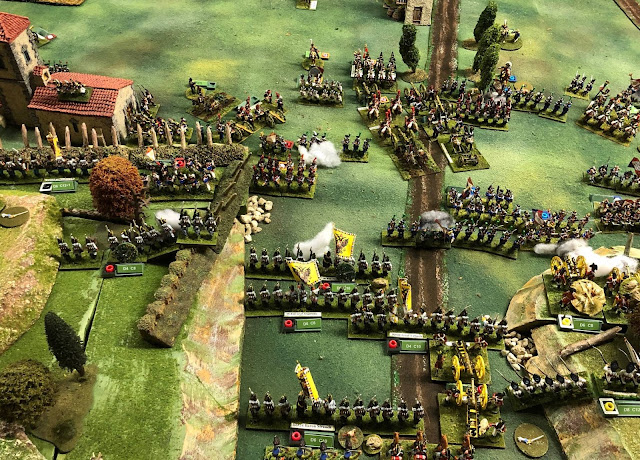 Situation in the Gap after all of that is resolved. 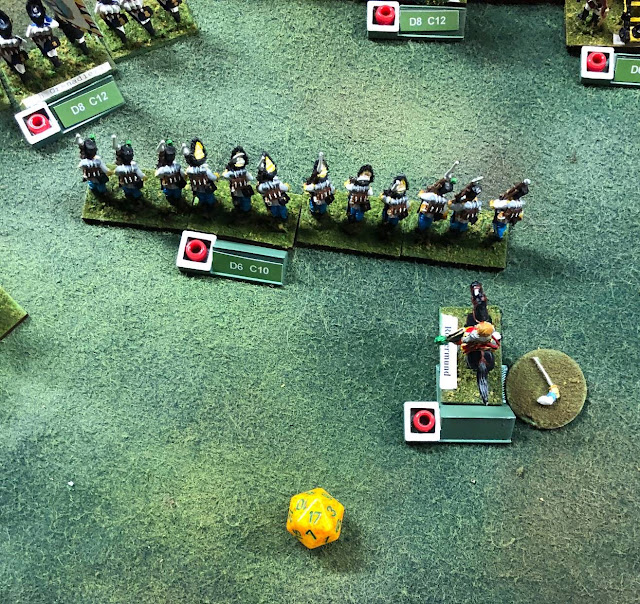 GM Colloredo hasn't needed to use his LD until now, and his rating was indeterminate; with a  D20 roll of 17 and an Abysmal Army command rating, he gets an LD10, the best possible for an army with an Abysmal command rating. 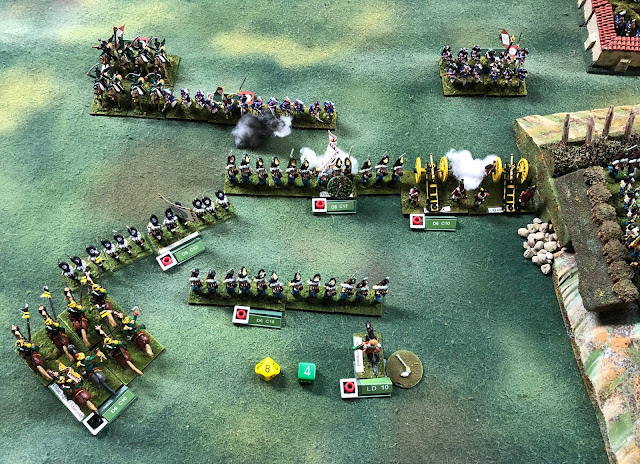 His Grenadier brigade gets a Double Magic Move! 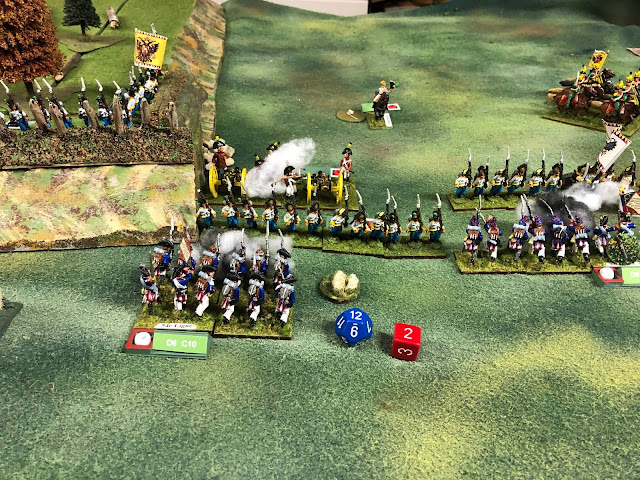 Some ersatz Grenadiers move up and encounter opportunity fire from the French column; the Grenadiers suffer 3 UI loss and rout back 10". 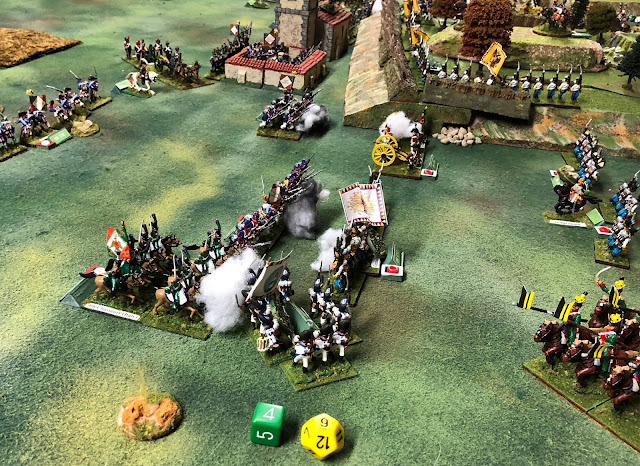 A plucky Grenadier unit moves right up to the somewhat stunned Chassuers, forms square, and blasts away at point blank range (D12+1), inflicting 2 UI on the cavalry, who hold.
As I have in the past, I think that squares are treated pretty generously with just a Down 1 for shooting and UP 1 as a target. I have changed these a bit for my own version in the past, and likely will do so again. 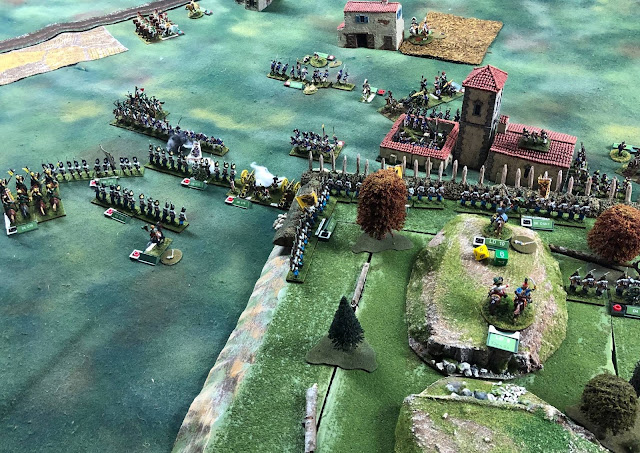 GM Kalnassy is struggling to keep the Uhlans in his command radius (LD x 2 in inches, here that's 20"). The brigade gets 1 segment. 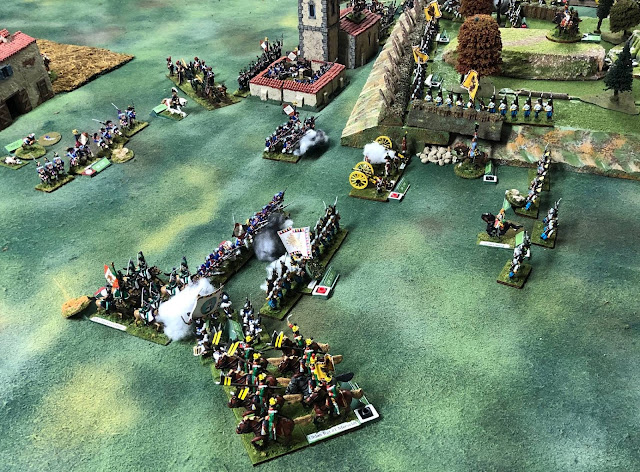 The Uhlans move up to protect the extreme Southern flank. 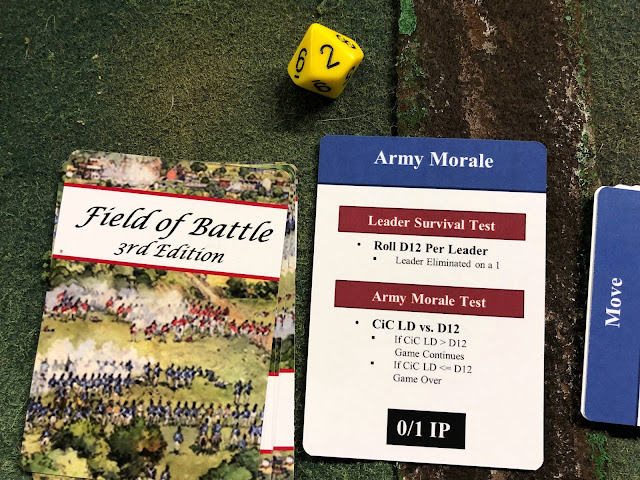 The next card is Army Morale. As the Austrians have at least one unit routed or destroyed, it costs them 1 impetus to turn the car. 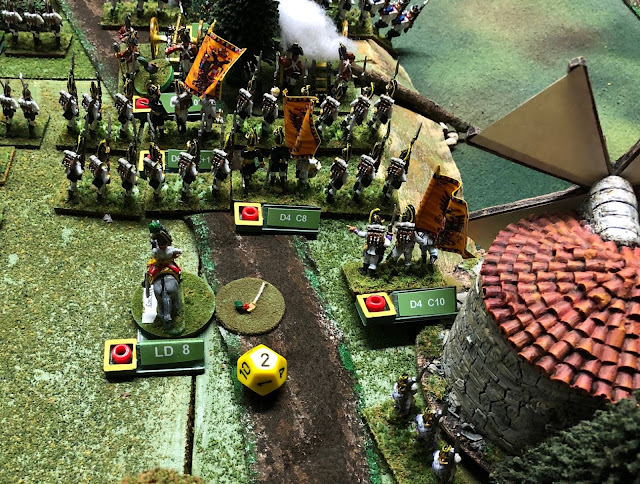 The leaders of every campaign group that has been shot at (even to no effect at all) or engaged in melee must check; on a D12 roll of "1", they are lost, and the entire Command is thrown into Disorder. There are a few close calls, but no officers are lost. The Leader check markers are removed as the testy are passed. This (and first fire) are obviously things that could easily be tracked on the OOB for those who dislike markers on the table. 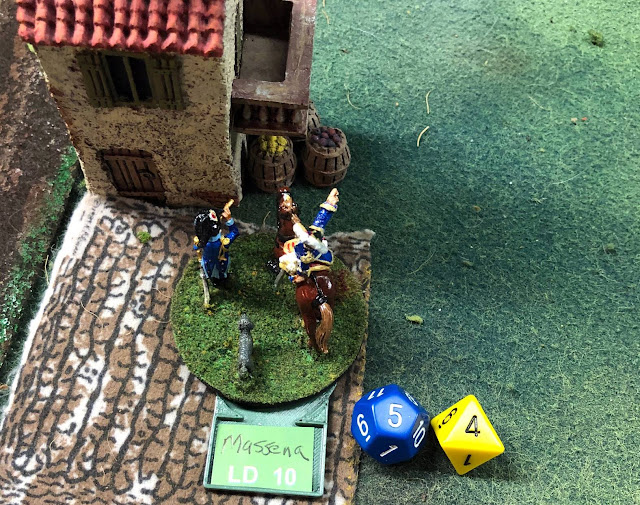 The next initative will be a single impetus for both sides. Will Massena chose to go 1st or second this time?
Posted by Gonsalvo at 10:13 PM