Historicon #4: Chariots of the Gods?, and some thoughts on To the Strongest!

I ran my final game of the convention at 7 PM on Saturday: Assyrians vs Egyptians with Canaanite Allies (the later courtesy of a large lead donation f\rom Ken Baggaley a year or so ago), with the excellent rules by Simon Miller, To the Strongest! 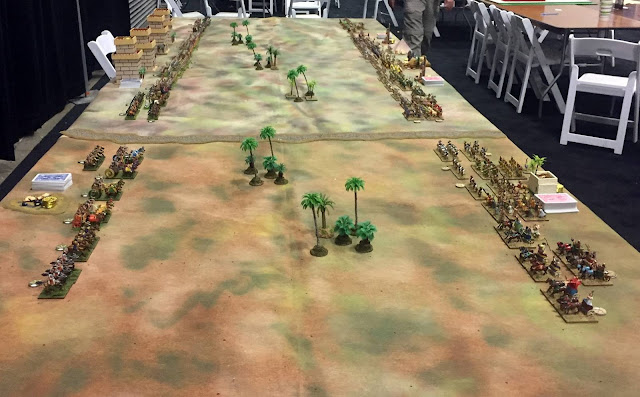 Overview of the table (16 x 5 feet), Assyrians to the left, Canaanites near right, Egyptians far right. 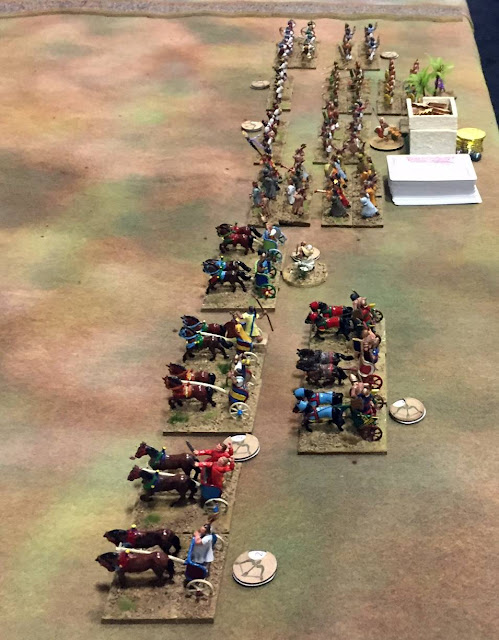 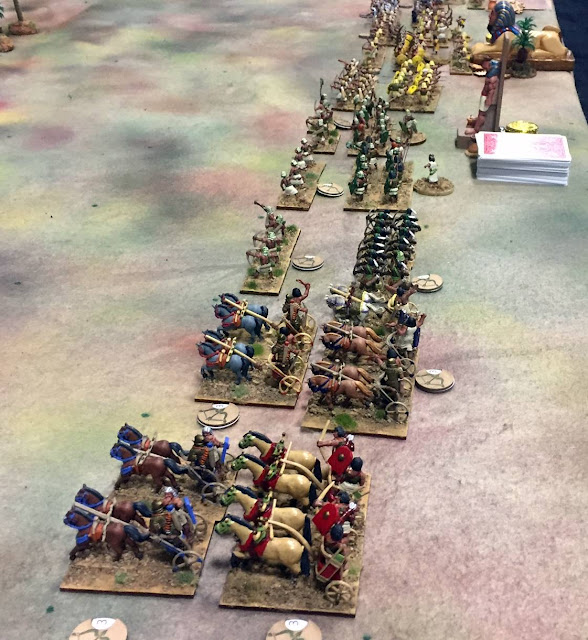 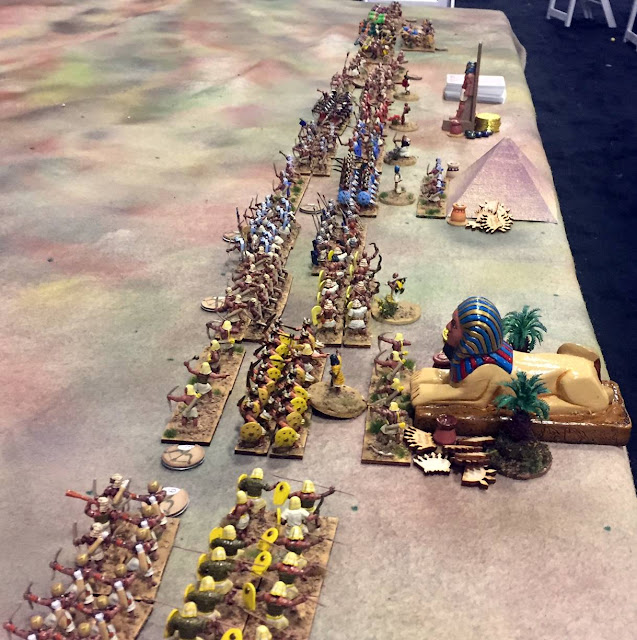 Divions Re (yellow), and Seti (Blue), posing with the Sphinx. The "arrow volley" markers are "reserve ammo". 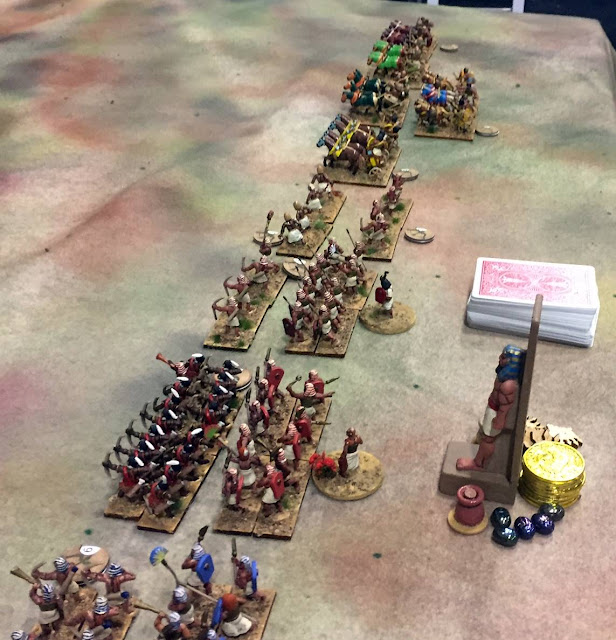 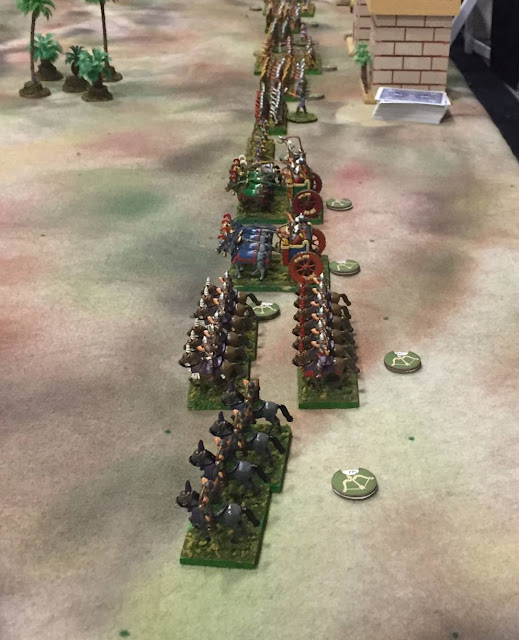 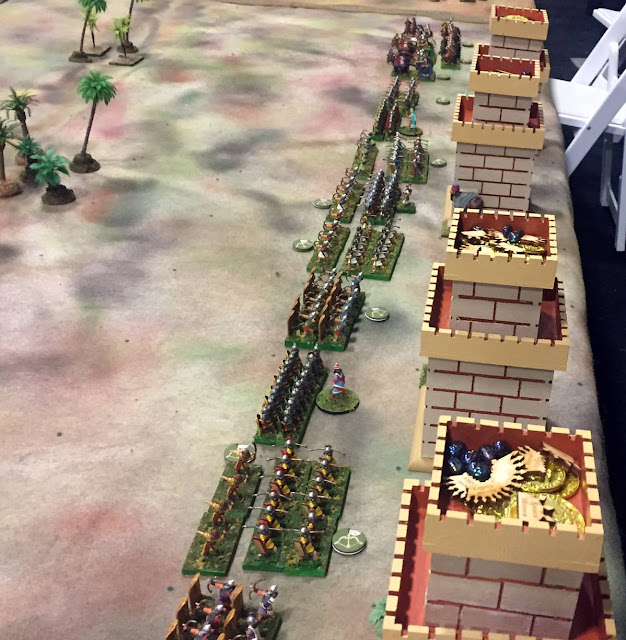 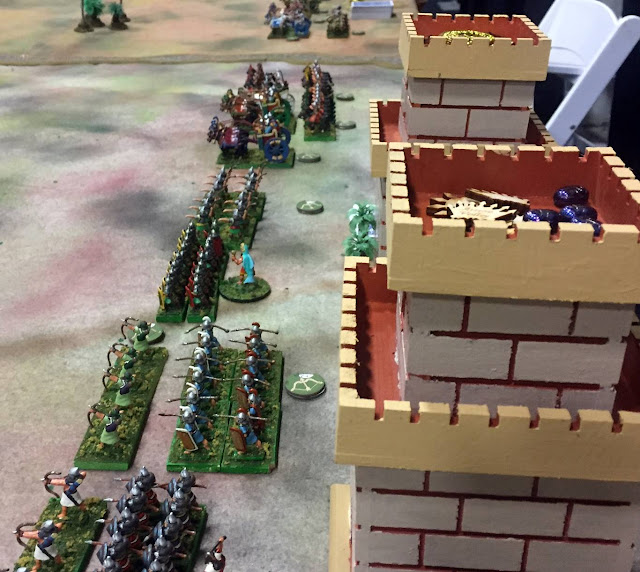 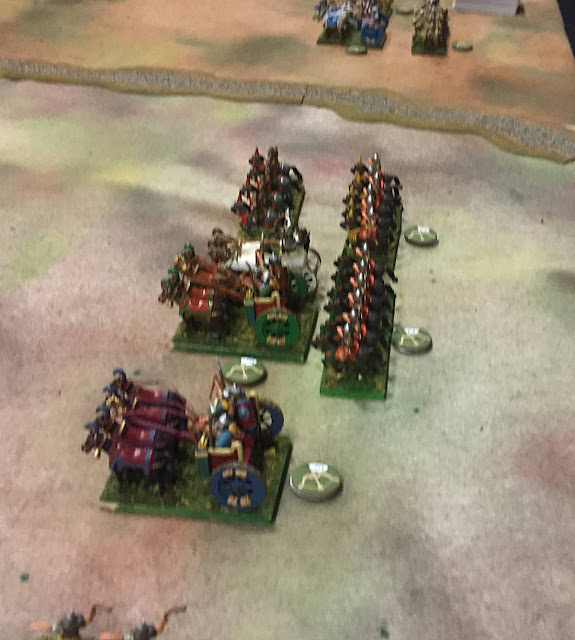 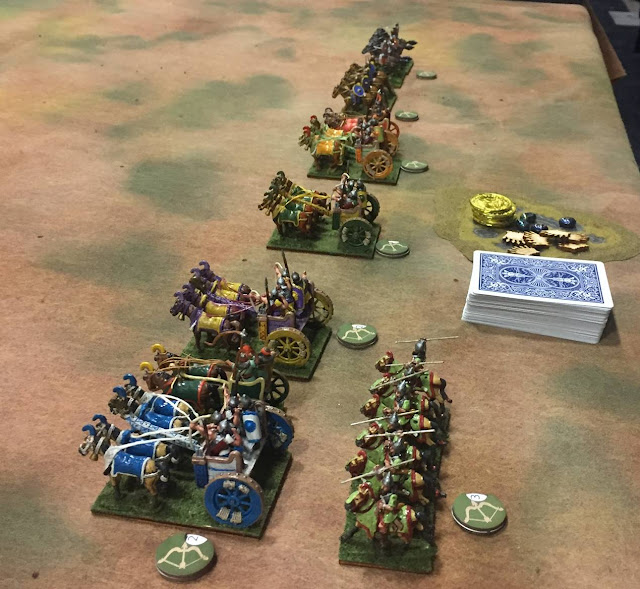 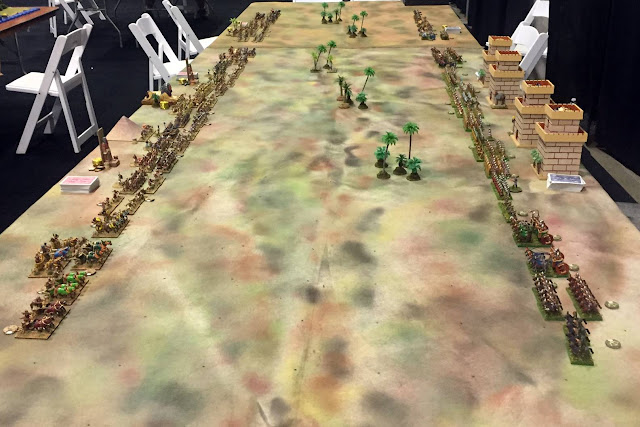 Table overview from the opposite end. 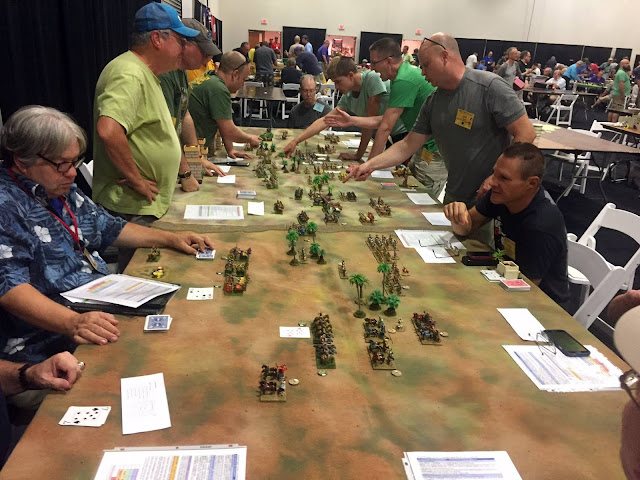 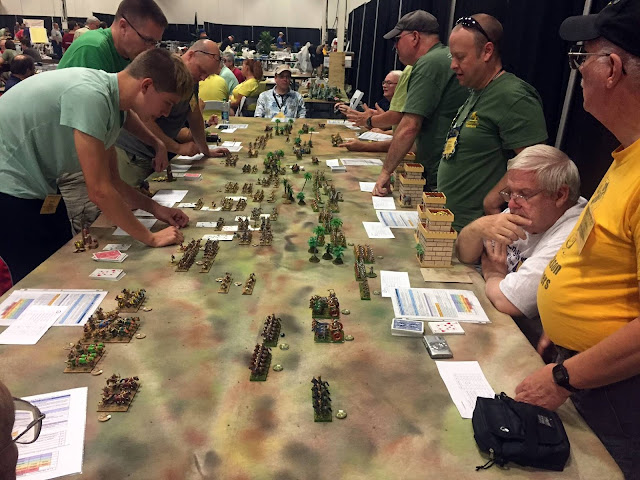 Almost everyone got in to the action fairly quickly - except the Canaanite infantry command (far left). 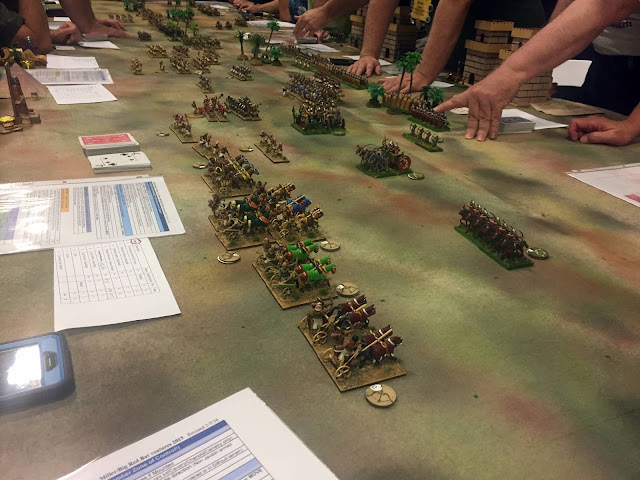 Tod Kerschner commanded these Egyptian Light Chariots, and did fairly well with them. He probably needed to be more aggressive at threatening the Assyrian flank later in the game, though. They are not easy to use against the better armored Assyrians!  We chatted during the game, and we'd both love to be able to go back in time and see what Chariot warfare was really like, along with a Napoleonic Heavy Cavalry charge!  Victor had the supporting troops of Division Amun. 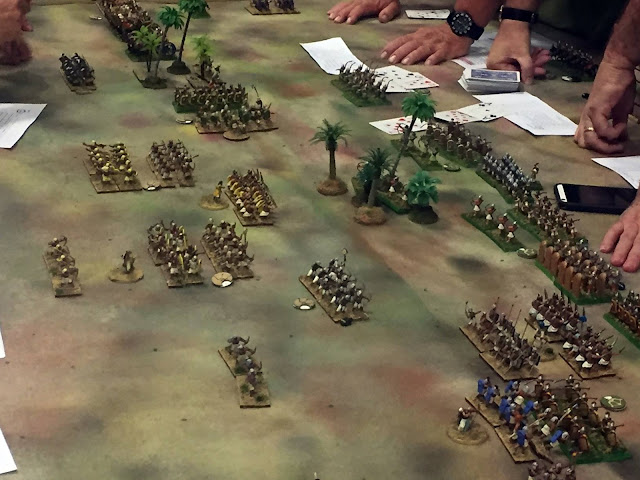 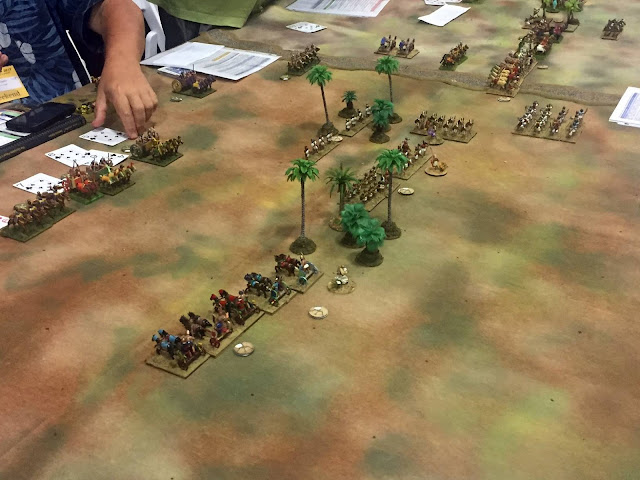 A definite cat and mouse game on the Canaanite end of the table! 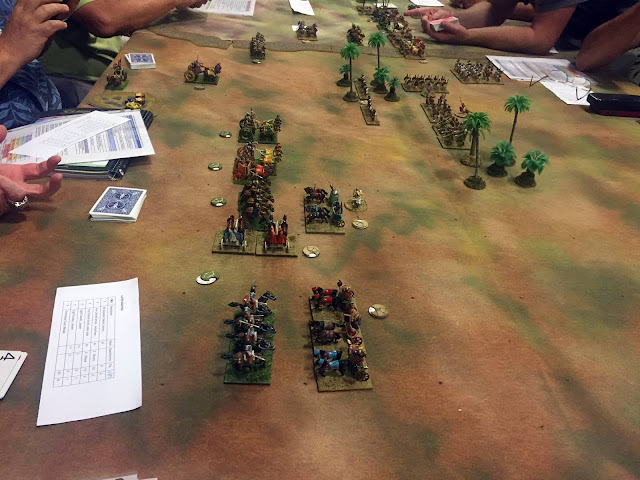 Light Chariots doing what they need to do - seeking he enemy's flank! 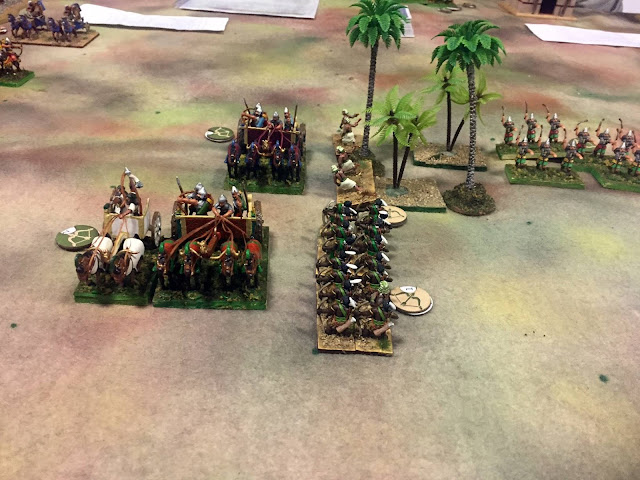 Speaking of flanks... Veteran Nubian bowmen shooting into the flank of a heavy chariot, with the attached general...   potentially up to 4 hit cards to be played, with a negative save adjustment for the target as well! 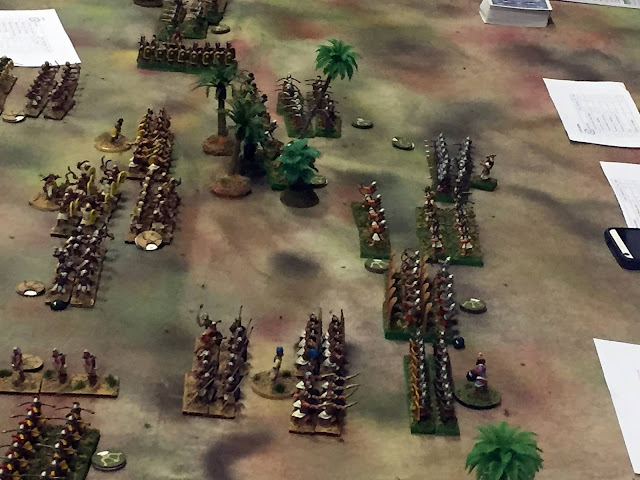 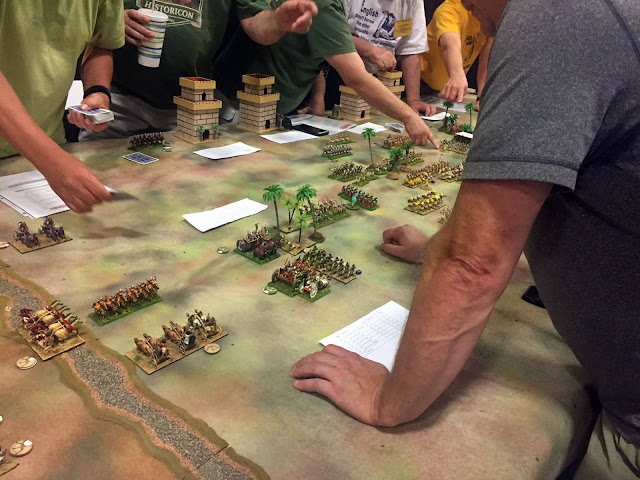 Light Chariots daringly maneuver across the Wadi to gain a flank. The wadi is made from WizardKraft "Dry river beds", with a new option, desert flocking. They were delivered just a few days before I departed for Fredeicksburg, as requested! 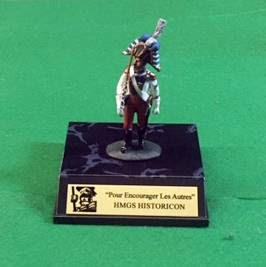 About 2/3 of the way through the game, a tap on the shoulder resulted in the receipt of a PELA award for the game, the presenter commenting that there weren't many people who could more chariots on the table than he did... but that I had done it! 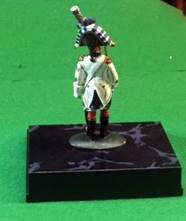 I observed that it was more a tribute to the players, and the rules than anything else.
On the other hand, from the first game with these armies with Barry a few years ago, each additional Egypt vs Assyria game resulted in some upgrade... the towers, the Sphinx, the scarabs, the Canaanites, more Assyrians, the dials, and so on. I had observed that Saturday night games had become thin (doubtless GM exhaustion!) in years past, and figured that would be the perfect time to run a big game like this - one with a lot of players, but also one that would conclude in a reasonable period of time  with rules that were easily picked up. As it was, the Assyrians were declared the victors with a little over 2.5 hour game play. Everyone seemed to enjoy the rules as well!

Speaking of that, I have to sat that To the Strongest is one of those rare, special rules sets that reinvigorates my enthusiasm for our hobby. It has probably caused an at least 50% increase in the size of my Ancients to Medieval era armies, with  few more expansions yet to come. It is an ideal game for conventions, or any time you want a fun game with limited set up work that will finish in 3 hours or less. Simon has an English Civil War rules set using TtS principles which is due for publication later this year, and there are many ideas for applying the rules concepts to other conflicts, and genres to be found on the discussion board for the rules. Indeed, I plan to use them to create a new set of rules for my 15 mm Renaissance galleys.

I started in miniature wargaming at about age 13, as previously related. Napoleonics has always been my first love, and that remains unchanged after almost 50 years. My introduction to Ancient wargaming, as also previously related, came at the home of Charlie Sweet, in Bristol, CT. Charlie and Dave's Ancient Wargames Rules were probably my favorite of theirs... so much so that I later developed my own set using many of the same central ideas but very different combat mechanisms (see Legio Quaternarius).  To the Strongest! shares many core concepts with both of these sets.

First and foremost, it uses a gridded board. I have long been a fan of gridded tabletop wargames; indeed, the original Napoleonic rules that my group used for 20+ years were hexagon based. As Charlie argued in an article in the original NEWA Courier (which may even have been reprinted from another, earlier journal), the one thing that you can to that speeds up play the most is to use a gridded board. Gone are any need for rulers or tape measures to measure ranges, moves, etc. Gone are any arguments over field of fire, angles of contact, and the like. Simon's concept of just marking the corners of the squares ("boxes") allows excellent visual appeal for those who find a traditional grid unattractive

Second, it is basing independent. While both Charlie's rules and mine had standard basing conventions, there was really no reason the figures HAD to be based just so. In the case of To the Strongest!, this means that virtually any basing an be used, and it need not be similar for both armies. Thus troops based for almost any rules set can easily be used with To the Strongest!

Third, the rules are relatively accessible to those without either much gaming experience, or much knowledge of the era or armies involved.  They can be taught and played with just a few minutes introduction to the key concepts. Combat is fairly decisive, as it takes only 1 to 3 steps to eliminate a unit. A wide variety of different troop types and ratings are accommodated without unduly overburdening the system. Once the troop ratings for an army are established and placed in some kind of digital file, setting up a game can be done quite swiftly. The game can be played with just a few figures per unit, or with hordes. It can be played with two players, or twenty.

To the Strongest! also shares a  number of concepts with the Piquet/Field of Battle family games that I love. The Victory Medals are pretty much the same as the Morale Chips of those systems. This gives the game a distinct ending point. It uses cards (albeit in a very different way) to determine the sequence of actions. It uses asymmetrical movement and opportunities to act. It requires a LOT of decisions from the player. The mechanics of the game keep both players engaged, regardless of whose turn it is. Combat is relatively non atritional. And most importantly, the game is fun to play!

Is To the Strongest! the last word in simulating Ancient Warfare?  Well of course not!  Simon himself would be the first to disavow even attempting to accomplish that. Thus it may not tick the boxes for dyed in the wool players of any era. For the rest of us, it i a heck of a game, that "feels" right, and allows us to use a lot of different toys from across the sweep of history. It also seems to be to be a nearly ideal "gateway drug" for introducing newcomers to our hobby, somewhat akin to the Commands and Colors" family of games in that regard (as well as several others from the concepts cited above).
Posted by Gonsalvo at 9:45 AM