Note: This scenario is lightly modified from that devised by James for BoB2, for my use with Hostile Realms. With apologies to James, I have largely reproduced it below:

GENERAL BRIEFING
Louis XII of France placed his army of Italy under the command of Gaston de Foix. This very young but capable commander drove away the Spanish and Papal forces besieging Bologna, and then turned on the Venetians, inflicting a severe defeat upon them, and then successfully stormed Brescia.

Whilst Gaston de Foix was occupied against the Venetians, Ramon de Cordona the Spanish Viceroy of Naples and his Papal allies reoccupied much of Romagna. Gaston, realising that he could not pursue a campaign in two places at once, decided to force the allies into a decisive open battle, defeat them, and free himself to pursue any course of strategy he wished. To force Ramon’s hand Gaston marched on the most important city held by the allies, Ravenna. He set up his camp and sighted his artillery on the left bank of the River Ronco.

Ramon determined that Ravenna was in serious danger and marched to relieve the siege by threatening Gaston’s lines of communication without risking an open battle. But the celebrated engineer Pedro Navarro showed Ramon a position on the right bank of the Ronco, within two miles of the city, which given time to throw up a ditch and earthwork, he guaranteed impregnable.

Whilst the Spanish spent the night digging the French spent the night constructing a bridge of boats over the Ronco. Everyone knew that a fight would take place next day and the respective commanders issued formal defiances by trumpet.

For more background online, here is the Wikipedia article. 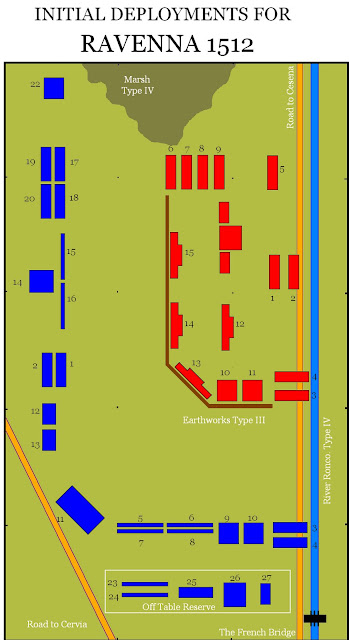 Map (and scenario) are from James' most excellent blog (see link above).

FRENCH BRIEFING
To win the battle you must destroy or rout 8 units of the enemy (artillery sections and skirmish units count as half units) within 10 turns (French MOVE cards). Anything else will be considered a loss.

D’Algre's rear guard
From the second appearance of your Stratagem Card you may bring up D’Algre's force via the bridge of boats. If the reserves are called you must destroy an extra unit of the enemy to win. These troops are from the (off table) rear guard that Gaston ordered to prevent a sally from the city. DO NOT DEPLOY THE ARTILLERY SECTION.

Hidden battery
Providing D’Algres is present, you may put a battery of light artillery anywhere on the left bank of the river. This represents D’Alegres’ moving some artillery to fire into the flank of the allied cavalry.

SPANISH BRIEFING
To win the battle you must defend your earthworks in anyway you see fit until the end of move 10 and lose less than 8 units (artillery and skirmish units count as half a unit each) doing so.

Hidden obstacles
Two of your Spanish infantry units have 20 or so small man handled carts equipped with heavy arquebus and various fixed spears and blades. These carts give the units a superior position frontally in melee and fire until the unit is pushed back in melee, when the carts are deemed destroyed. These carts, designed by Pedro Navarro, had two functions, firstly to break up infantry or cavalry formations, and secondly to provide a platform for heavy infantry firearms previously incapable of being deployed in a field battle.

Dead ground
At the outset of the game, you may declare that any/ all of your infantry is prone. Whilst prone troops count an extra down 2 cover bonus Vs artillery fire coming from the your side of the Ronco, they are DOWN 1 in Melee and Fire while [prone.. Infantry may be ordered to stand any time you have the initiative including a won Lull). This represents Navarro’s orders for the infantry to lie down in the low ground to prevent artillery casualties before the French assault.

Spanish colunellas
This is a new formation. It comprises 8 stands. Four front row stands of arquebus backed by Four stands of pike (the latter placed centrally). The formation counts as a battle-mass for morale, melee and target. It counts as a line for movement and fire. It may take one free stand of losses as per a pike blocks. They count three hits per stand. 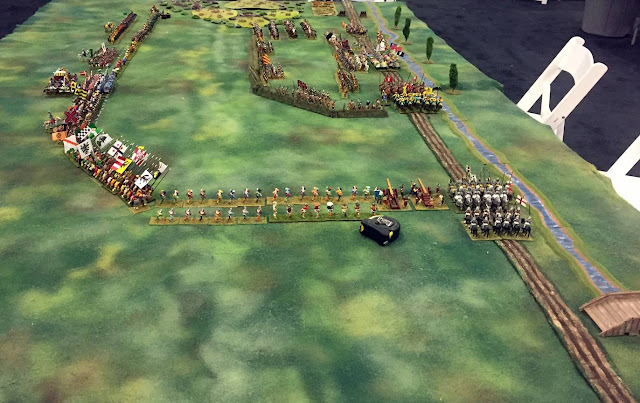 Set up from behind the right flank of the French Lines. 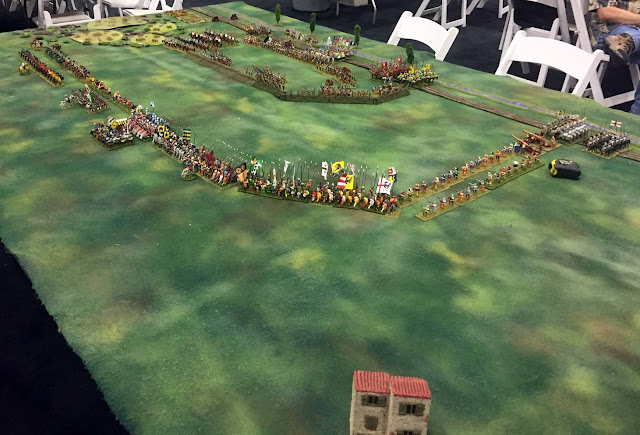 and from behind the French Center 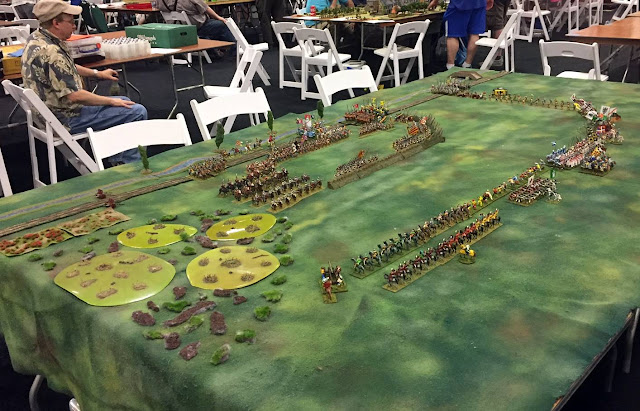 And from behind the French Left. Note Czar Barry relaxing. as always, Barry's help was invaluable!

Close up from the French Left. 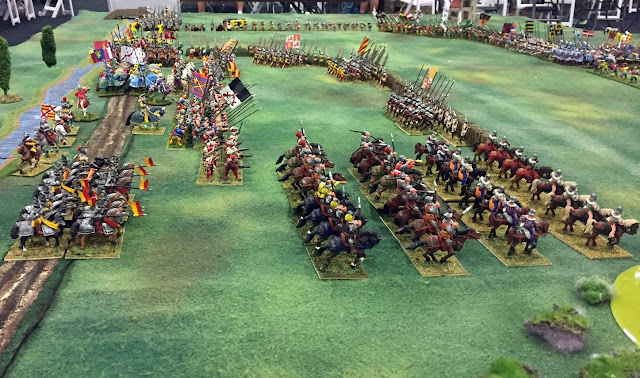 and the Spanish Right. 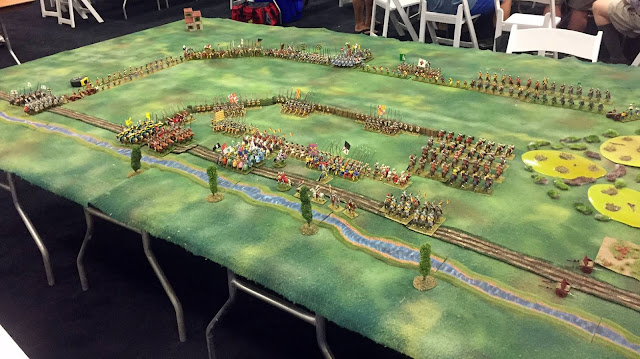 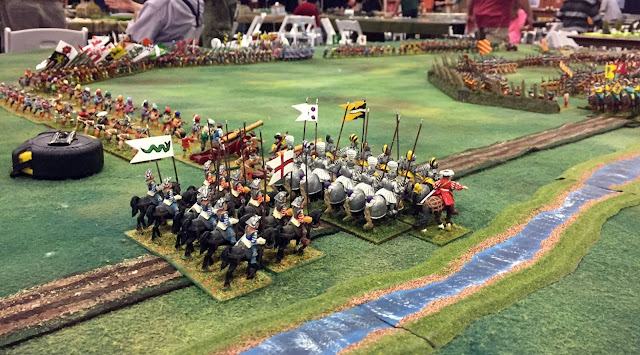 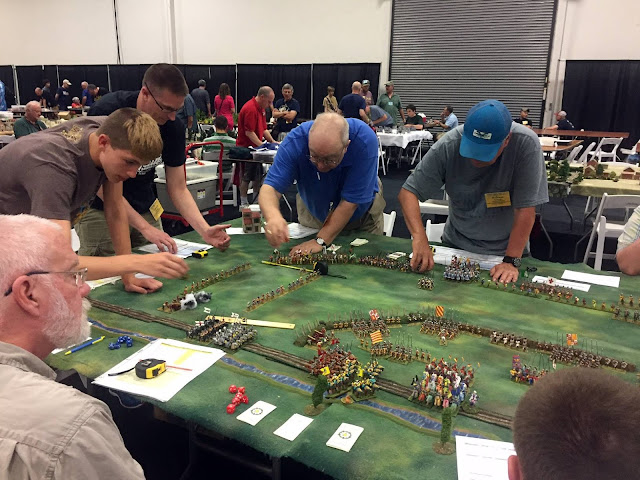 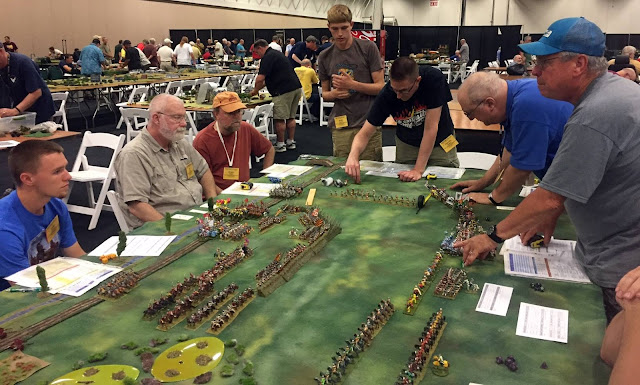 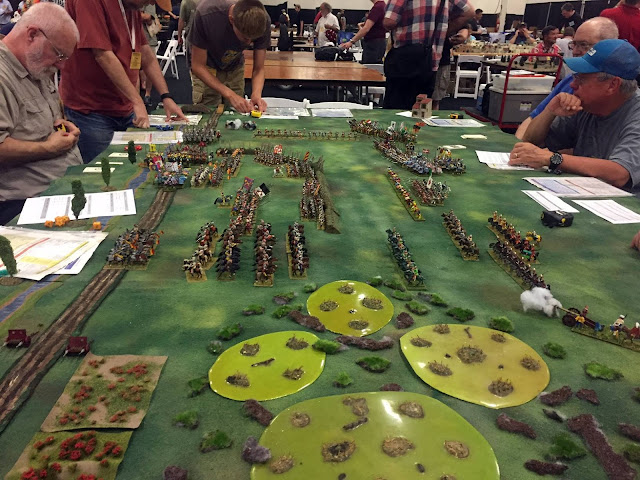 Thwe French players moved forwards quite aggressively, after a few rounds from their guns. 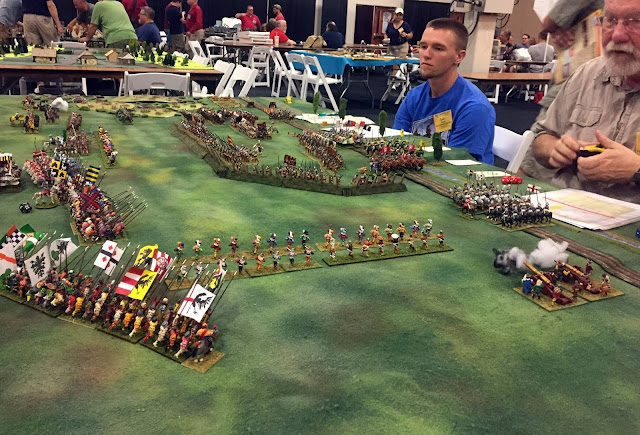 I do love the sight of advancing Pike blocks! 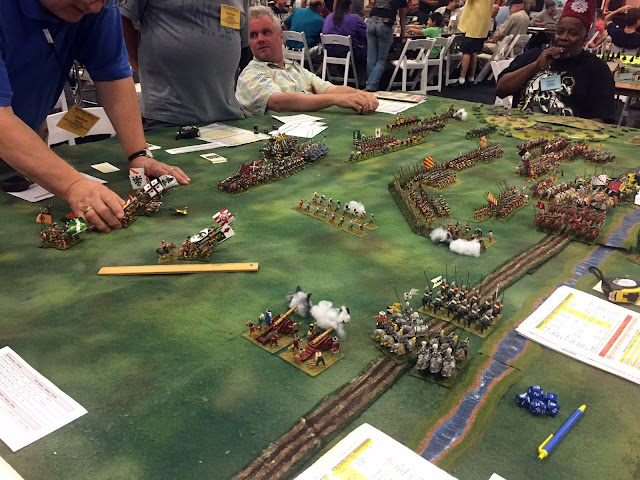 The French skirmishers shielding the advance of the pike units were shot away by the Spanish Colunellas; no big deal, that's what they're there for! 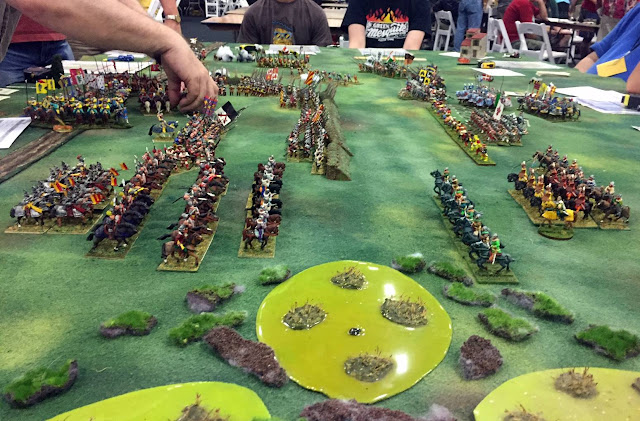 By the marsh, the opposing light and medium cavalry units draw closer. 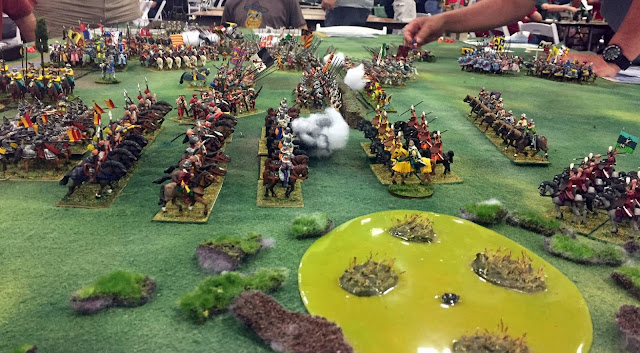 Spanish Arquebuses fire, usually to deadly effect. I made a major error in handling the morale effects of this fire, making the results similar to those from melee, while in actuality a Moral Challenge was required for the targets to have to check morale at all. This seriously compromised the attack of the French/Landsknecht Pike units. 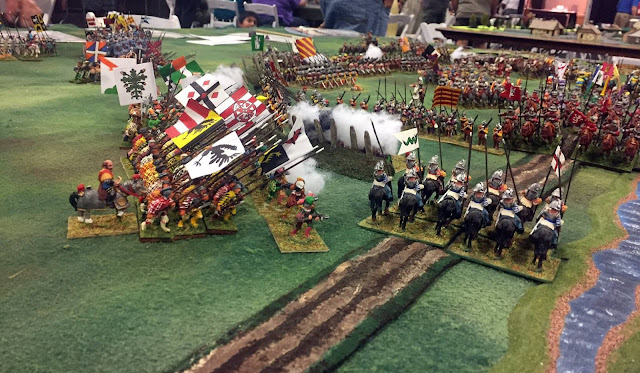 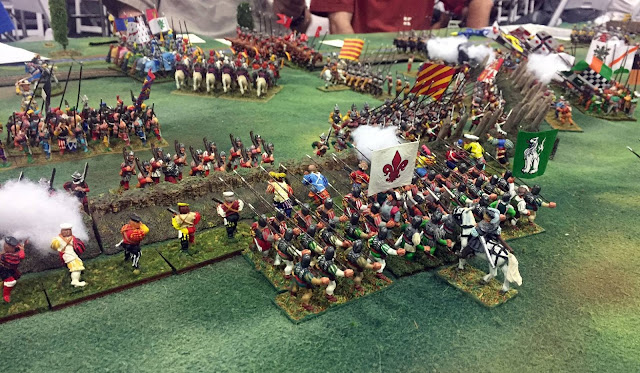 and yet more push!

Crunch time all along the line! 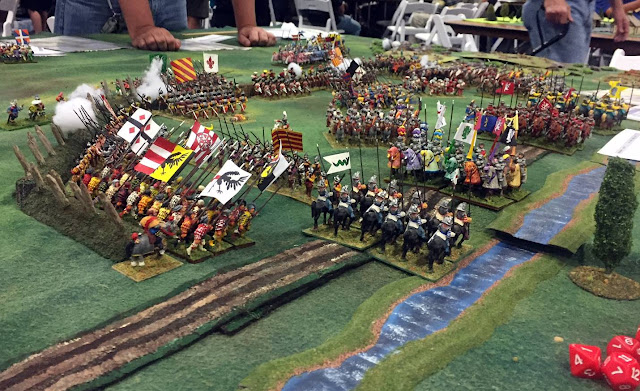 Even with playing it wrong, one Pike unit manages to scale the earthworks and repulse the defending Colunella!

At this point, all but one of the French Pike attacks had been repulsed, and the French conceded. Without my error, it would have come down to a bunch of close melees along the breastworks. My apologies to the players.

I was actually MORE rested than usual for the (miserable) drive down to Fredericksburg (almost exactly 7 hrs - left 9:00 AM, arrived 4:00 PM). I had gotten everything organized the weekend before, and allowed sufficient time so that I wasn't up super late at night, or hyper wondering if I'd get it all done. That meant I wasn't exhausted Wednesday night for a change, but then I never sleep well the first night or two away from home. I knew something wasn't right, but my brain was fried from poor sleep Wednesday evening, and I just couldn't figure out what it was until the next day. Still , the game looked great and seemed fun to play, it just would have been a lot more fun had the battle along the earthworks taken place as it should have!

Note to self - do NOT run more than one game in a day, unless at least one is a replay. I know I've said this to myself before, and then I get carried away! Doubtless I'll do it again...
Posted by Gonsalvo at 8:01 PM